[ The Korea Herald – Send E-mail ]
[Newsmaker] Park Geun-hye: the disgraced president
By Yoon Min-sik
Published : Dec 9, 2016 - 18:03
Updated : Dec 10, 2016 - 21:34
From the first child of a slain dictator to the nation’s first female president and now the epicenter of the country’s worst political fiasco, the life of Park Geun-hye has had many turns.

Park taking on her first public role in South Korea happened as dramatically and abrupt as ever; with the assassination of her mother Yuk Young-soo, wife of former president Park Chung-hee.

The death of Yuk to a bullet meant for her husband and president called for then-22-year-old Park to take on the role as the first lady. It was then when Park developed a close relationship with Choi Tae-min, a cult leader who claimed to be a messenger of her deceased mother. 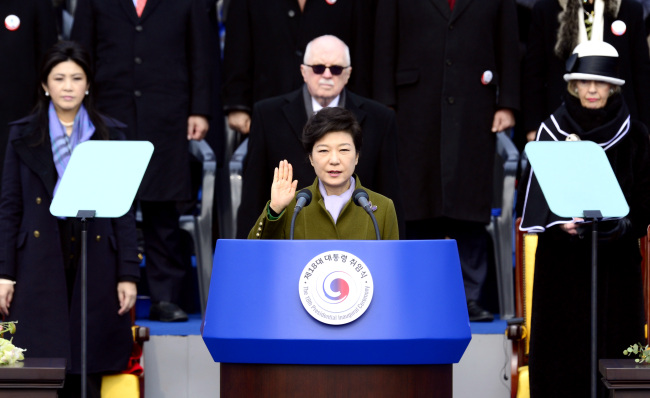 Park Geun-hye is sworn in as the 18th president of South Korea in this Feb. 25, 2013 file photo. (The Korea Herald)
After the assassination of her father in 1979, Park Geun-hye left the presidential palace of Cheong Wa Dae. In years that followed, Park kept Choi close, while running an educational foundation named after Yuk.

Her relationship with Choi would become the source of lurid rumors that would haunt her throughout her political career, and her friendship with Choi’s daughter -- Choi Soon-sil -- would later explode in what is believed to be the worst political scandal in the country’s history. 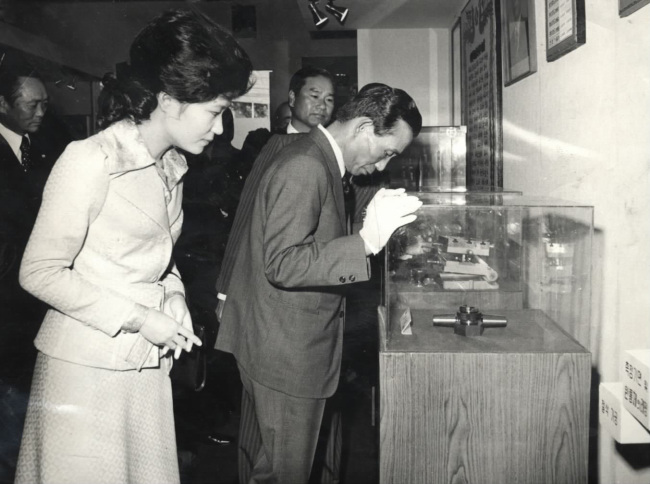 Park Geun-hye accompanies her father, ex-President Park Chung-hee, during an official event in this undated file photo.
Since leaving Cheong Wa Dae, Park lived in seclusion for 18 years until she joined the Grand National Party -- the forerunner of the now-ruling Saenuri Party. Park was elected to the parliament on the GNP ticket in 1998.

As a politician, she enjoyed solid support from voters nostalgic for her father whose 18-year rule saw the economy making a meteoric rise dubbed “the Miracle on the Han River.”

She earned a nickname, “queen of elections,” after 2004 general elections, in which she led the then-crushed GNP into a surprising performance.

Elected as the party leader in the month before the election, Park decided to relocate the party’s head office into a makeshift tent in a symbolic move to apologize for an illegal funding scandal it was involved in.

The election was widely expected to be a nail in the coffin for the GNP, but when the dust cleared on April 15, 2004, the GNP exceeded expectations by winning 121 of 299 parliament seats -- there are currently 300 seats. 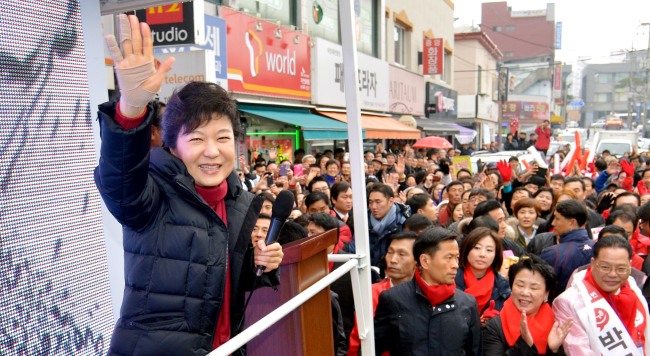 In this Nov. 28, 2013 file photo, then-presidential candidate Park Geun-hye addresses citizens during her campaign for the 2012 presidential election. (The Korea Herald)
Uri Party won the majority for the first time in its history with 152, but it was rather underwhelming as strong public support had it once shooting for 200-plus seats.

It was the first in a line of successful election campaigning that later became a core asset to the “queen of elections.”


Rise to top office and downfall


In August 2012, Park became the presidential candidate for the Saenuri Party.

Her presidential campaign was marked by questions about her past -- her relation with the self-proclaimed pastor Choi who by that time had already passed away.

Many people also raised questions if a daughter of a dictator can be president of a democratic society.

But Park eventually defeated the liberal candidate Moon Jae-in in a close race to become the first female president in Korean history in February 2013.

One of the worst incidents during Park’s tenure was the sinking of ferry Sewol in April 16, 2014. The tragedy left 304 dead or missing, and the lackluster rescue effort had ultimately revealed a network of connections between the civic and public sectors.

It sparked the administration to launch a pan-government anti-corruption task force headed by the Prime Minister’s Office.

Park’s time in office has been marked by a deteriorating relationship with North Korea. Pyongyang’s new leader Kim Jong-un -- who took power after his father’s death in 2011 -- repeatedly snubbed international regulations and conducted more ballistic missile launches than his father did in his 17 year-reign.

The administration also indefinitely postponed the transfer of wartime operation control from the US military to Korea, citing stronger military alliance against North Korea.

Other notable incidents during her tenure include the disputed decision to disband the far-left Unified Progressive Party in 2014, an outbreak of Middle East Respiratory Syndrome in 2015 and the controversial decision to reinstate the state-authored history textbooks in the same year.

But the biggest bang came in 2016, when it was revealed that Park’s civilian friend Choi Soon-sil had access to classified documents and is believed to have siphoned public funds via nonprofit foundations.

Prosecutors believed that Park conspired with Choi and her former aides, and an independent counsel, Park Young-soo, is expected to investigate whether or not the money raised by local corporations for Choi’s foundations amounted to bribery for Park’s inner circles.

The scandal led to Park’s impeachment on Friday. If the Constitutional Court endorses it, she will be the first president of Korea to be removed by the parliament.