To impeach the embattled head of state, at least 200 lawmakers from the 300-member National Assembly need to support the motion. Currently, opposition parties, which led the impeachment drive, together have 172 seats including those of like-minded independent members.

To get Assembly approval, the impeachment bill is required to attract at least 28 lawmakers from Park’s ruling Saenuri Party. The ruling party, the largest political bloc in the Assembly with 129 seats, has been divided on whether to support the motion.

The following is a real-time running update of the National Assembly's move to vote on the impeachment motion. -- Ed.

At the moment Assembly Speaker Chung Sye-kyun announced the passage of the impeachment motion, it was rather somber inside the room where the 299 lawmakers sat.

Outside the parliament, where hundreds of citizens awaited in thick padded jackets, people shouted out in relief, while some hugged each other in joy.

“It was an outcome I prayed for. Still we have a long way to go until the final decision (is made by the Constitutional Court). I will participate in tomorrows and future rallies until it all ends,” Choi Hye-jeong, 29, said at the scene.

On the other side of the cheering citizens stood others with grim faces in a group supporting President Park Geun-hye, as they called out that the results were unfair and irresponsible.

Police guarded the gate of the parliament and surrounded the loud crowds, guarding against possible violence.
4:16 p.m. 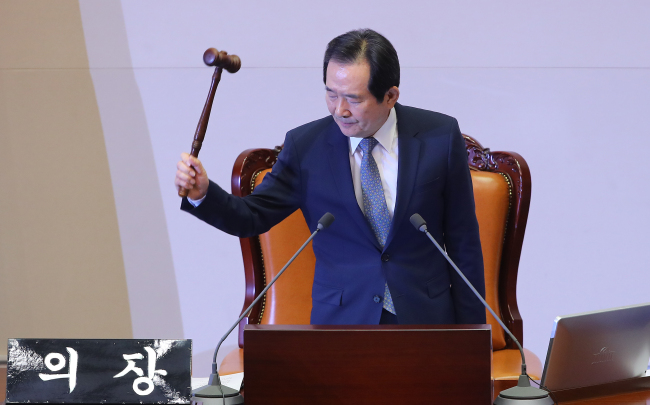 The impeachment motion against President Park Geun-hye passed at 4:10 p.m., Friday. Out of the 299 votes cast, 234 votes were in favor of impeaching the president, 56 were against, two were withdrawn and seven were invalide votes.
3:58 p.m. 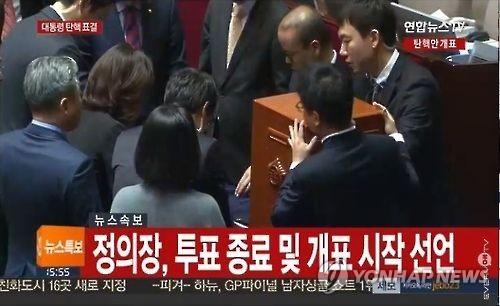 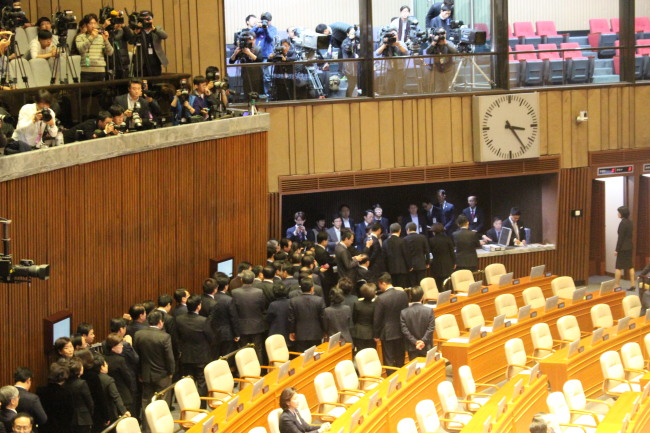 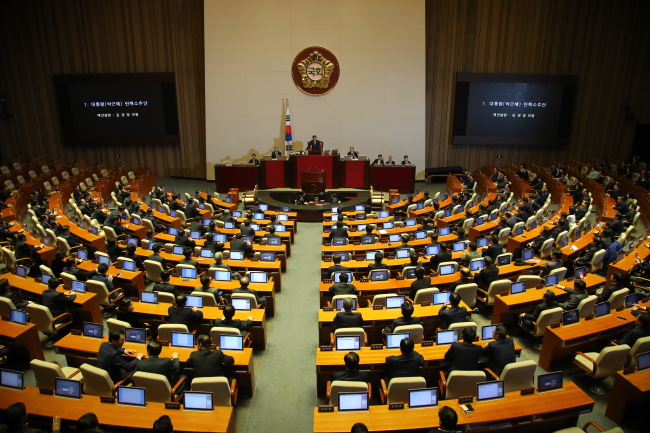 
The National Assembly started its groundbreaking plenary session at 3 p.m. Friday to vote on the impeachment bill of President Park Geun-hye.

Political parties entered the parliamentary hall on time, but several seats in the ruling Saenuri section remained vacant until the last minute, reflecting the reluctance of those loyal to the embattled president.

In the audience were 40 bereaved family members of the Sewol ferry victims, who showed up upon the invitation of the main opposition Democratic Party of Korea.

The embattled incumbent president has been facing calls to withdraw from power for her alleged involvement in an extensive corruption scandal that includes her longtime friend Choo Soon-sil. She has also come under fire for failing to make key rescue decisions during the Sewol ferry sinking incident in 2014.

“We have realized that truth (concerning the Sewol accident) may never come to light as long as the Park administration is in charge,” said Yoo Kyeong-keun, the committee head of the Sewol Families for Truth and a Safer Society.

“Impeachment will mark the start of a new era in which we may reveal the truth about Sewol and step forward into a safe society.”

The participating members pledged to exert pressure upon the parliamentary floor to vote in consent of impeachment and thus embrace the public sentiment.

Shortly after the opening of the session, Rep. Kim Kwan-young of the runner-up People‘s Party presented the impeachment bill to the floor, stating President Park’s violation of the nation‘s Constitution and other laws.
2:30 p.m. 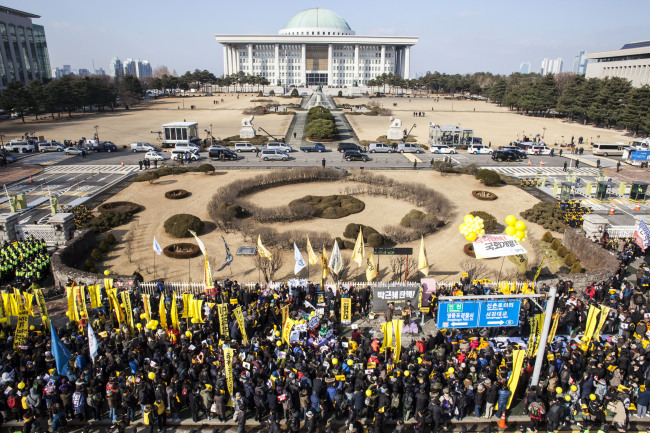 Thousands gather at the front gate of the National Assembly on the day of impeachment vote. (Yonhap)


Thousands of citizens have gathered at the front gate of the National Assembly building on the day of impeachment vote in a last-ditch effort to pressure lawmakers to pass the motion.

Many of the protestors echoed hope for a better, more just society by impeaching the president. If the motion does not pass, many said they would continue to fight until she resigns.

Conflicts have erupted as a farmer drove a tractor to the main road in front of the National Assembly building packed with protestors. As police blocked protestors walking from another part of the area from joining the protestors at the front gate, protestors chanted “guarantee peaceful rallies” and “open the way.”

In this afternoon, South Korea’s parliament will vote on whether to impeach President Park Geun-hye over an influence-peddling scandal involving her secret confidante Choi Soon-sil.
12:50 p.m. 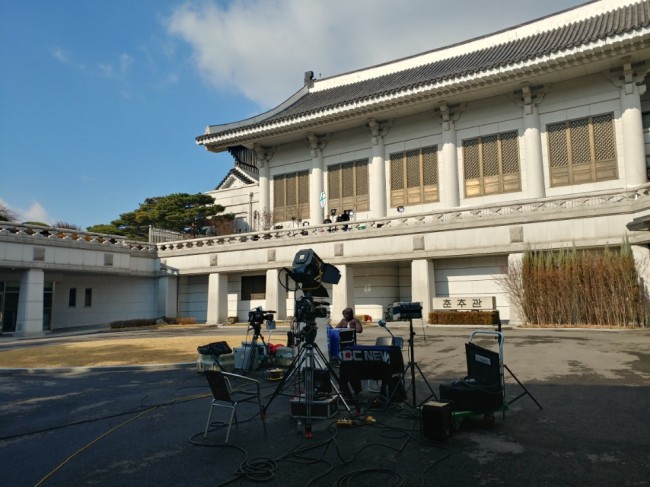 While broadcasting vans filled the parking lot in front of the Blue House’s press room building, the president and secretariat members refrained from appearing in public or making official remarks.

Presidential Chief of Staff Han Gwang-ok chaired a meeting of senior secretaries in the morning to discuss countermeasures to possible impeachment. The parliamentary floor vote on ousting the president is to start at around 3 p.m.

“All we can do is keep watching,” said an official under anonymity.

“All senior secretaries have pledged to hold the fort so as to minimize confusion in state affairs.”

This message echoed that of the embattled president who is said to have visited the secretaries‘ office on the previous day, urging all officials to “wait for the decision in a composed manner.”

Meanwhile, Park was said to be in her presidential residence in the morning, keeping away from the operation offices and watching the situation in Yeouido on television.
12:30 p.m.

Groups opposing and demanding Park’s impeachment are rallying outside the National Assembly.

A group of Park’s supporters have quarreled with a liberal activist.

The Assembly has decided to shut down the buildings if the impeachment vote falls through.
10:34 a.m. 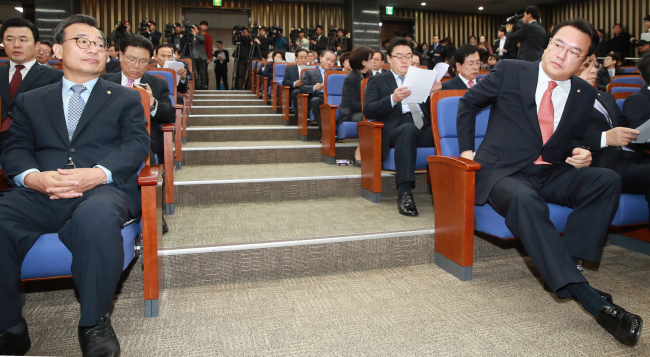 
For lawmakers from rival parties, today's vote is crucial. Their political fates will surely change dramatically, depending on the outcome of the impeachment vote.

Here are some of the quotes from senior politicians on the coming impeachment vote.

Rep. An Cheol-soo, former chairman of the People’s Party:

"The morning of the revolution has come. The National Assembly will make a historic decision today. The history and the people will remember today’s choice as justice.”

Rep. Choo Mi-ae, chairwoman of the Democratic Party of Korea:

“Impeachment is the way to save the country and people’s lives. Citizens, who hold national sovereignty, have already impeached the president.”

“What citizens asked in Gwanghwamun Square was to have justice in the country and keep sound conservative values. We heard their requests and will keep them in our hearts when we head to the vote.”

“The president is in fact in absence already (since before the scandal). Nothing can be worse than the current situation. Zombies are the most dangerous – (she) should either live or die. The fact that someone who should die is still alive, just causes chaos.”

“We will say goodbye to old, warn-out South Korea and open the door to new South Korea in few hours. The citizens will undoubtedly win.”

“The impeachment of the president is the judgment of the past and the start of the future. Citizens will play the main role in creating a new history. History will record today as the day that democracy and justice won.”
9:45 a.m. 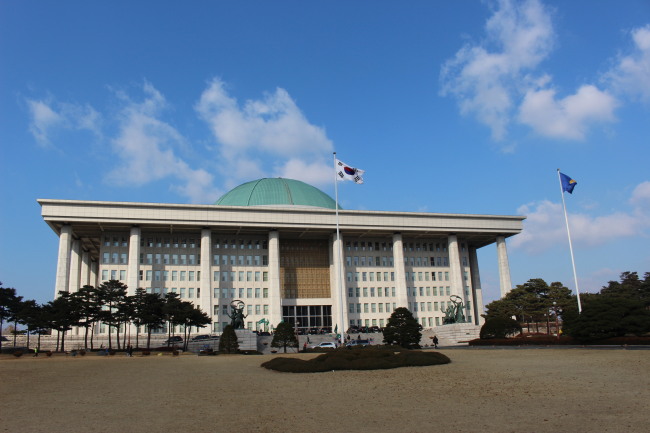 The National Assembly in Seoul (Jo He-rim/ The Korea Herald)


The crucial vote day on the impeachment of President Park Geun-hye has arrived. A quiet, but tense atmosphere is surrounding the National Assembly in the morning.

The parliamentary vote on whether to remove President Park from office for her alleged involvement in the political corruption scandal is due at 3 p.m.. A group of some 30 lawmakers from Park’s ruling Saenuri Party have been in a meeting since 8 a.m. Rep. Kwon Seong-dong, one of the lawmakers in the meeting, told reporters that they were “100 percent for Park’s impeachment.”

Members of the main opposition Democratic Party of Korea and another Saenuri Party group are also in seperate discussion over their stance toward the presidential impeachment vote, the second of its kind in Korean history.