[ The Korea Herald – Send E-mail ]
Park, Obama, Abe to cooperate for strong sanctions on N. Korea
By Suk Gee-hyun
Published : Feb 9, 2016 - 15:27
Updated : Feb 9, 2016 - 15:32
President Park Geun-hye and her U.S. and Japanese counterparts agreed Tuesday to cooperate to ensure that the U.N. Security Council can adopt a resolution for strong sanctions on North Korea for its latest nuclear test and long-range rocket launch.

The Security Council has vowed to “expeditiously adopt a new resolution” with significant measures against North Korea. 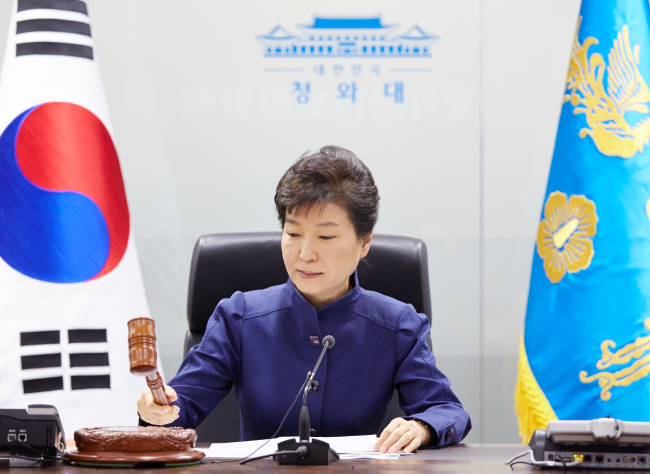 (Yonhap)
North Korea said the rocket successfully put an Earth observation satellite into orbit on Sunday as part of its space development program. Still, South Korea, the United States and other regional powers view the North‘s satellite launch as a cover for testing its ballistic missile technology, which is banned under U.N. resolutions.

Park and U.S. President Barack Obama “agreed to closely cooperate to make sure that the Security Council can adopt a resolution for strong and effective sanctions on North Korea,” Cheong Wa Dae said of Park’s telephone conversation with Obama.

The council has been working on a resolution to punish North Korea for its Jan. 6 nuclear test. North Korea has already been under U.N. sanctions for its three previous nuclear tests: in 2006, 2009 and 2013.

The two leaders also shared the view that South Korea and the U.S. should put strong and varied pressure on North Korea in addition to a U.N. resolution, the presidential office said.

It marked the second time that the leaders have held a telephone conversation in just a little over a month.

Park spoke by phone with Obama soon after North Korea carried out its fourth nuclear test. At that time, Obama reaffirmed the “unshakable U.S. commitment” to South Korea‘s security, and the two leaders agreed to work together to forge a united and strong international response to North Korea’s nuclear test.

On Tuesday, Park told Obama that the international community needs to take specific actions to get North Korea to recognize that its policy of developing its economy and nuclear arsenal in tandem will never succeed.

Seoul and Washington have repeatedly warned that the North‘s dual-track policy is a dead end for the country.

Still, the North has repeatedly pledged to boost its nuclear capability, viewing its nuclear program as a powerful deterrent against what it claims is Washington’s hostile policy toward it.

Also Tuesday, Park held a telephone conversation with Japanese Prime Minister Shinzo Abe and the two leaders agreed to cooperate for a U.N. resolution to make North Korea pay the corresponding price for its nuclear and missile tests.

Abe told Park that Japan is working to impose its own sanctions on North Korea in addition to a U.N. resolution, Cheong Wa Dae said. (Yonhap)