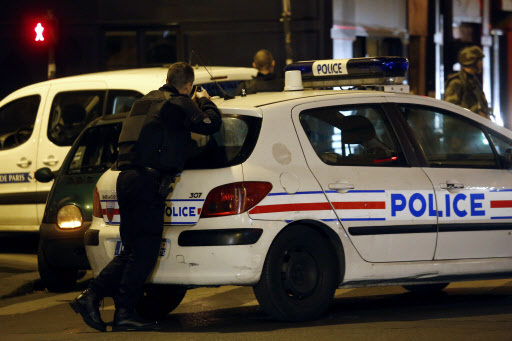 Police officers secure the area near La Belle Equipe, rue de Charonne, at the site of an attack on Paris on November 14, 2015 after a series of gun attacks occurred across Paris as well as explosions outside the national stadium where France was hosting Germany. More than 100 people were killed in a mass hostage-taking at a Paris concert hall and many more were feared dead in a series of bombings and shootings, as France declared a national state of emergency. (AFP)
A total of eight militants were killed, including seven by their suicide belts, during Friday‘s attacks in Paris that left at least 120 dead, a source close to the investigation said.

Four of the attackers were killed in the Bataclan concert hall, three by activating their suicide vests and one shot by police.

Three more died near the national stadium and a fourth was killed in a street in eastern Paris. (AFP)