[ The Korea Herald – Send E-mail ]
Lotte seen forging ahead with succession plan
Group chairman and founder’s scion moves closer to taking over conglomerate
By Suk Gee-hyun
Published : Mar 15, 2015 - 18:36
Updated : Mar 15, 2015 - 18:36
Lotte Group appears to be bringing forward its succession plans as the conglomerate named one of the founder’s sons to the board of its holding company last week.

The group appointed its chairman Shin Dong-bin to the board of Hotel Lotte, the de facto holding company of the conglomerate, whose businesses range from construction to shopping malls and snack production.

The appointment is widely seen as another sign of the controlling family’s succession plans, amid rampant rumors that Shin is aggressively expanding the group’s businesses to impress his father, Lotte Group general chairman Shin Kyuk-ho. 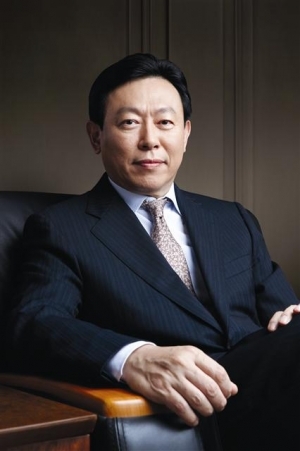 General chairman Shin; his eldest daughter, Lotte Shopping president Young-ja; and his eldest son, former chairman of Lotte Holdings in Japan Shin Dong-joo, are already in charge of the board.

Shin Dong-bin gave up his board memberships at two of its smaller subsidiaries last year, fast-food chain Lotteria and Lotte Aluminum, which have sales of 619 billion won ($544 million) and 1.4 trillion won, respectively.

That leaves Shin on the boards of 10 affiliates, including Lotte Shopping, Hotel Lotte and Lotte Chemical.

“This reflects Shin’s consolidated position within the group and his family,” a Daewoo Securities analyst said on condition of anonymity. “I’d say Shin is gearing up to make his debut as the heir of Lotte.”

Shin’s older brother Dong-joo, who had been widely expected to take over the Japanese businesses, was recently forced to quit from all executive positions at the Japanese units between December and January, “in accordance with his father’s wishes.”

He has been seeking large-scale business investments since then in an apparent move to prove his management skills and gain his father’s approval, observers said.