Some, like Miuccia Prada, appear in the doorway for a nanosecond. Donatella Versace walks a good 10 meters out to salute the crowd, while Giorgio Armani stands perfectly lit in the darkened stage entrance.

Monday was to be Frida Giannini’s last bow as creative director at Gucci’s menswear after a decade at the Florentine house ― but that was not to be. The highly anticipated curtain call was canceled without explanation. Instead, the bow went to a young design team that completely revamped the collection Giannini had prepared.

Here are some highlights from menswear previews for next autumn and winter from the third day of Milan Fashion Week on Monday:

The Gucci style team may have pulled off a fashion record. They designed and produced the menswear runway show for next winter in five days, after outgoing creative director Frida Giannini left sooner than had been announced.

Giannini’s exit from the storied Florentine fashion house was announced last month by the French owners, Kering, which said she would leave after showing the men’s and women’s collections for autumn and winter 2016. No reason was given for the change of plans. Gucci’s press team on-site Monday called the decision to redesign the collection from scratch “a new chapter.”

A team of young designers, led by head accessories designer Alessandro Michele, came out and took a collective bow, to sustained applause. Gucci said a successor to Giannini would be announced “in due course.” 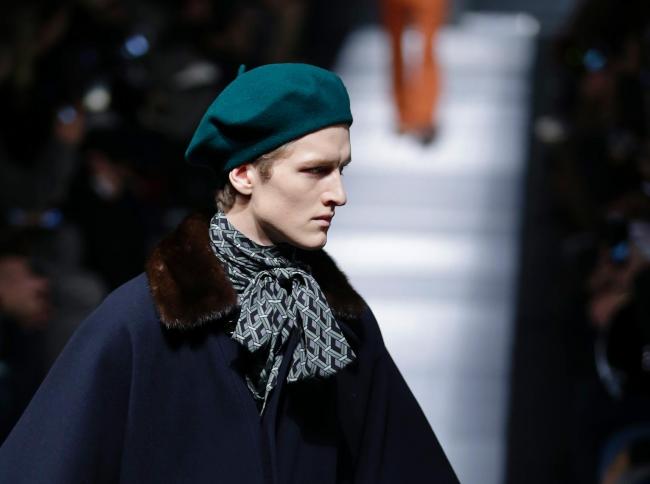 A model wears a creation for Gucci men’s fall-winter 2015-2016 collection, part of the Milan Fashion Week in Italy on Monday. (AP)
Gucci salutes the French Republic

Gucci’s androgynous collection, worn by both male and female models, appeared to be a tribute to French artists, intellectuals and revolutionaries in the wake of the twin terror attacks in Paris this month that have shaken Europe and the world.

The hues of red, white and blue, the colors of the French flag, contributed to the sense of (hash) jesuischarlie camaraderie that sprung up worldwide in the wake of the recent terror attacks in Paris.

Many of the outfits suggested characters from France’s rich cultural history: A white shirt with a dark ribbon tied in a bow around the neck, worn with blue trousers and capped with a red beret, was reminiscent of a French school uniform. A more elaborately tied silken bow conjured the image of a poet. A fur-trimmed cape was befitting of an artist setting up his easel in a Parisian park.

“I wanted to recapture some grit with a style that was not too aggressive, but with pride and refined materials and shapes,” Armani told reporters.

Trousers come with a zip at the ankle, while more athletic cuts of pants carried the zip dramatically across a diagonal all the way down to the cuff. Armani continued his exploration of the jacket, creating new versions out of soft rough-cut jersey with a waistband in the back that gives it a blousy feel.

The collection opened with a line of models dressed in ski racing bodysuits, a glimpse of his EA7 line of athletic wear ― which the designer said in a little over four years has grown to revenues of 100 million euros. “Nothing to laugh about,” he said.

Giorgio Armani, who celebrates 40 years in the fashion business this year, has been appointed to the role of Expo 2015 fashion ambassador for the six-month world’s fair opening May 1.

The 80-year-old designer is planning a gala runway show at his theater to coincide with Expo’s opening. Armani said he won’t necessarily create a new Expo collection, and he hasn’t decided what elements of his collections he will highlight: menswear, womenswear or his highly prized Prive couture line.

Armani also has invested 50 million euros to open an exhibit space called Silos where he will show a retrospective of his 40-year career “from the first clothes, to the last,” he said.

Brioni has come full circle. On its 70th anniversary, the Rome-based label returned to the runway that it pioneered in 1952 as the first menswear house to stage a catwalk collection.

The collection was a study in discipline, taking inspiration from the equestrian tradition of the Spanish Riding School and architectural details from the Wiener Werkstaette. Mullane reveled in the coincidence that it takes Vienna school riders and Brioni tailors each nine years to reach master status.

Andrea Pompilio has given thermal underwear a major upgrade.

In his second season at the 80-year-old Canali label, Pompilio created fine silk-cashmere pullovers reminiscent of thermal underwear, down to the ribbing on the cuff that peeked out form the jacket sleeve, and paired them with colorful tuxedoes in eye-popping shades of crimson and yellow. “I love it. This kind of almost underwear, but it becomes eveningwear,” the designer said backstage.

Pompilio continues to put his stamp on the historic brand ― in check patterns, this season more macro, and horizontal stripes, both abstract and graphic. The collection was among the most composed on the Milan runway, with a strong focus on elegant men’s suits, in keeping with the Canali DNA, combining with softer, less formal sweaters. Looks were finished with hybrid mountaineering shoes with metal rivet lace holders, meant for urban terrain.

Call it craftsmanship at its most extreme. What appears to be thick corduroy strutting down the Fendi runway on jackets and trousers is actually sheepskin and leather. And those pinstripes? Wrong again. Laser-cut 3D stripes.

The collection was very tactile, with a soft silhouette featuring sloping shoulders. And everything has a purpose: big scarves can function as blankets and feature handy pockets.

The bags are made for men who will use them: A backpack features a netted pocket big enough for a soccer ball. And if the classic color scheme ― dark blue, maroon and gray ― give a button-down, serious impression, well then take a look at the quirky bag charms: a furry smiley face and half an apple.