When Kenny Park started the company in 1987, naming it after a nickname he had given his wife, luxury handbags made in Asia were unheard of. “It was an

unspoken rule that for bags over $1,000, customers wanted a ‘Made in Italy,’” Park said at his corner office, filled with rocks, flowers and handbags, on Dec. 16.

Yet, armed with seven years of experience and a proven track record at a business specializing in handbag OEM for foreign brands, and perhaps more importantly, a genuine passion for handbags, Park went straight to the top U.S. fashion brands asking for business.

The third son of a wealthy businessman, Park was expected to join the family fisheries and shipping business upon graduating college, just as his two older brothers had done.

Park, however, told his father he would like to do something else for three years before joining the family business.

“From the time I was a freshman in middle school to the time I was a junior in college, I went to the high seas for four to six weeks during summer vacations working on my father’s ships, and I wanted to see more of the world,” said Park. 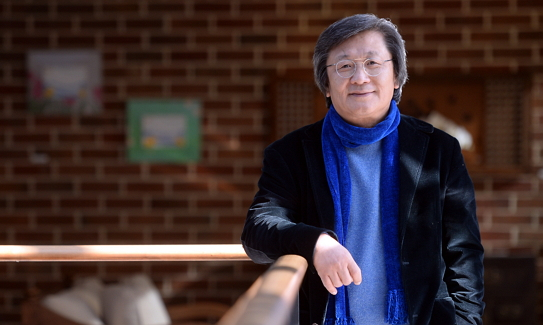 Simone CEO Kenny Park poses at his office in Uiwang, Gyeonggi Province. (Ahn Hoon/The Korea Herald)
Park ended up joining a handbag OEM (original equipment manufacturer), thinking that he would be able to travel the world at a time when overseas travel was rare and difficult. And that he did. Only a few months after joining the company, Park was sent to Florence on a business trip, the first of many more that he would take ― first as an employee and later as CEO of Simone.

Park was impressed by the art and color of Florence. “Men’s pants came in eight colors! I never thought men’s pants could come in so many different colors. I bought all eight colors,” Park said.

After six months, Park was hooked on the business. “It was a creative OEM and I was involved in product development and marketing,” Park said. He was unable to keep the promise with his father but rose quickly through the ranks in the company as a high-flying achiever.

By 1987, Park was ready to start his own business and struck out on his own with 100 million won and 15 employees. The company has since grown by leaps and bounds, becoming the No. 1 handbag maker in the world, capturing nearly 9 percent of the world market.

Simone is headquartered in Uiwang, about 30 minutes outside of Seoul, in a building that won an architecture prize in 2003. The headquarters reflect the office-campus concept that Park first saw in the U.S. headquarters of Espirit. “It is based on the notion that a free, open environment will lead to open sensitivities,” Park said of his building, which features a lot of green space. 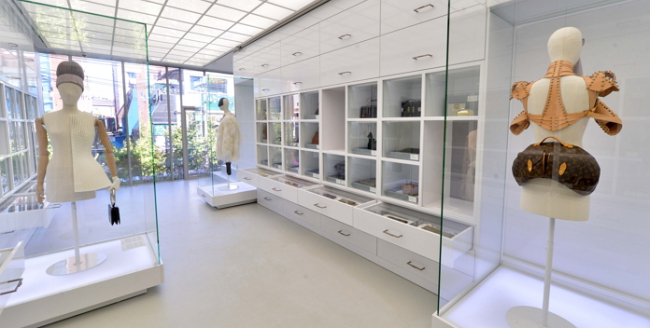 A view of Simone Handbag Museum in Garosu-gil in Sinsa-dong, Seoul (Korea Herald file photo)
Park, whose initial motivation for joining a handbag OEM was the possibility of travel abroad, continues to travel extensively, spending five months of the year overseas. “I would say 70 to 80 percent of my ideas come from traveling,” Park said. “It is a time to escape the daily routines and have my own time.”

For the past 10 years, Park has added a bit of his own time to his business trips. “On trips that last more than a week, I try to spend one day doing what I want,” Park said.

Simone is a truly global business. It sources materials from around the world, while sales and marketing are conducted in the U.S. Manufacturing takes place in factories in Indonesia, Vietnam and China, where it began operations in 1991 even before formal diplomatic relations were established between Korea and China. The R&D center with a staff of 250 is located in the headquarters in Korea.

“Some have said that Simone’s story is not moving because there is no drama,” said Park. “There were challenges but they were predictable,” he added, explaining that the company was ready for the challenges when they came.

Simone may face its biggest challenge yet next year when it launches its own brand, 0914. The brand is named after the date on which Park met his wife.

Park feels that after nearly 30 years of designing and manufacturing for others, the company has gathered enough experience to introduce its own brand. “The 340 experts at Simone translate to 4,100 years of expertise,” said Park, endowing the company with an unmatched depth of wisdom and expertise.

Now seems to be the right time for the launch of a luxury handbag brand from Korea, according to Park. “Korea’s image is globalized enough for marketing and branding to be possible,” said Park.

It is with a sense of mission -― a responsibility to create a handbag brand in Asia with an original identity -― that Park has embarked on what he envisions as a 10-20 year project. “I plan to proceed quietly, slowly and with strength,” said Park.

The first step in the project is the launch of 0914 and the opening of its flagship store, located next to the Hermes building in Sinsa-dong, on Sept. 14, 2015. The building, which is taking three years to complete, is “all about the handbag,” Park explained. The building will feature a leather spa where leather goods can be repaired, a small area for manufacturing as well as sales floors and office space.

Over the next 10 years, Simone will engage in brand incubating and M&As of acclaimed brands through Simone Investment, as well as growing 0914.

Park readily admits that he micromanages, although selectively: He personally approves all samples and interviews all potential hires. “I tend to rely on physiognomy more than resumes. Now, that is a joke but I will personally interview all candidates for 30 minutes. I look for talent, passion and the candidate’s ability to think freely,” said Park. “I am proven right about 70 percent of the time.”

For today’s young people, Park offers the following advice: An innovator must be an expert in his field; think freely and keep your sensitivities open to new stimulations; and be curious about new things if you want to do something new and innovative. “I find that 98 percent of what I have came from those who preceded me and that only 2 percent is truly my own,” Park said.