Many more law firm partners, executives, entrepreneurs and civic leaders wear Nina ― pronounced NINE-uh, as her clients refer to her brand ― for their most decisive moments.

These are not neutral Armani suits, though the design, tailoring and fabrics rival European luxury brands. McLemore’s jackets are known for vibrant color, sometimes in lightweight tweed, often in double-face wool crepe sourced from Italy. Her garments are sewn in New York, where McLemore can monitor production.

Her jackets cost from $595-$795, versus $2,000 and up for Chanel ― a value proposition that financially savvy clients appreciate. 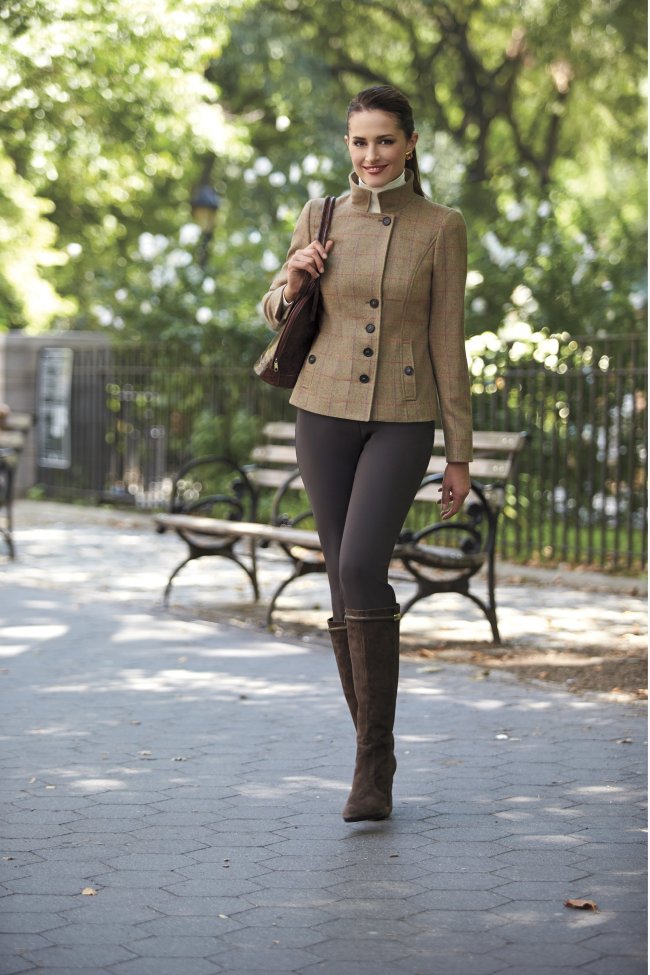 Nina McLemore designs for some of the most influential and affluent women in the U.S. (Nina McLemore/MCT)
“Just last week at my company’s Partners Summit,” DSC Logistics CEO Ann Drake said, “I welcomed key customers in a gray and white jacket, red silk T and black pants (from Nina). Then two days later, I met DSC’s Board of Directors in a red silk jacket and white silk T (from Nina). These are company colors, by the way.”

Now 69, McLemore is steeped in the apparel industry. She rose through the ranks at May Department Stores, founded Liz Claiborne Accessories and then worked in private equity before she retired.

Hearing friends lament the lack of high-quality professional clothing in stores, she went shopping on Madison Avenue to investigate.

What was there was either extraordinarily expensive or cheaply made and moderately priced, “not for the successful partner or C-suite executive,” she said.

She knew she could fill the void.

“My professional career has demanded long hours, extensive travel, presentations to CEOs and clients, and dinners and fundraisers,” McLemore said. “I understand what the professional woman needs.”

McLemore came out of retirement to launch her line in 2001. She now has 14 stores in cities such as Seattle, San Francisco, Boston and Atlanta. The collection is also sold through representatives who meet with clients privately in homes or hotel suites, and online at ninamclemore.com.

Earlier in her career, McLemore flew to Europe and Asia several times a year as vice president/general merchandising manager for May Department Stores’ international division.

“The immersion in the fashions of France and Italy and the strong sense of design in Japan and China influence my sense of design,” she said. “The travel also led to my insistence that every fabric we put into the collection has to travel without being ironed.”

Her upbringing in Mississippi, where she and her mom designed and made their clothes, also shaped her aesthetic. Elegant. Not trendy, flashy or revealing.

“In the South it was crucial to be seen as a lady,” she said, “who was someone who dressed very well ― whether she had money or not.”

She grasps why other brands don’t court executive women. Many designers strive to generate celebrity buzz for their brand, which leads to lucrative accessory lines and perfume licenses.

“They do not see the serious professional woman as glamorous, nor do they recognize that there are very many of them,” McLemore said. “So let’s keep this a secret.”

The Pampered Chef founder Doris Christopher began wearing Nina 15 years ago, partly because she likes the personal service of the national sales representative, who visits key cities five times a year. (The Pampered Chef also is a direct sales company.)

The jackets never wear out or wrinkle, Christopher said. “They go all day and into the evening without looking tired.”

As president of Harley-Davidson Financial Services, Donna Zarcone first bought Nina more than a decade ago when they met through the Committee of 200, whose members are women who own companies with more than $25 million in sales or who are CEOs of major corporations. McLemore became a founding member while at Liz Claiborne Accessories.

Today, Zarcone, president and CEO of the Economic Club of Chicago, has more than 10 Nina jackets on rotation.

The notion that they should blend in or dress like men is outdated.

“Personal style, quality and taste is important to successful career women,” she said.

“Women were always told to wear black or navy skirt suits with simple white or beige blouses,” she said. “Women attorneys need to make a power and credibility statement and learn to use clothes as negotiating tools ― setting the mood as part of setting the agenda.”

McLemore, who often is tapped for public speaking engagements, sees two common missteps in how women dress for business.

“One is not buying fine fabrics in styles that fit well,” she said. “Men understand fine fabrics and have everything tailored. So if a woman is wearing lower quality and poorly fitting garments, she is not taken seriously. She is not seen as a ‘player.’”

The second is wearing clothes that are too short, tight or low cut.

“Men won’t mentor and don’t want to be seen associating with women who look too sexy,” McLemore said, “and other women won’t like you.”

She believes women who want to ascend should dress for the job they want.

“Buy the best quality jacket you can find and have it tailored to fit. Wear expensive jewelry, even if the same piece over and over. And don’t wear black all the time,” she said. “You won’t stand out.”