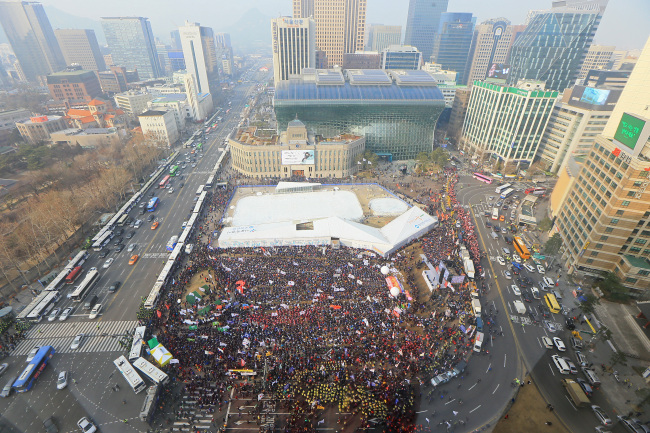 Members of the Korean Confederation of Trade Unions stage a rally in Seoul Plaza protesting the government’s alleged moves to privatize public firms on Tuesday. (Yonhap)
South Korea’s militant umbrella union defied authorities’ warnings and went ahead with a general strike across the country on Tuesday, protesting the government’s alleged oppression of workers and privatization plans.

About 200,000 members of the Korea Confederation of Trade Unions walked out of their jobs in 12 major cities, timed with the start President Park Geun-hye’s second year in office. The KCTU has a total of 700,000 members.

“The general strike is to claim workers’ rights and condemn the government’s privatization plan of the public sector and medical services,” the union said in a statement on Monday.

At 2 p.m., about 5,000 KCTU members began to chant and shout in Seoul Plaza, central Seoul, holding up signs that read “Park Geun-hye out” and “People’s strike on Feb. 25.”

The crowd included large and small labor groups that voiced their demands, ranging from a minimum wage guarantee to the shutdown of the power-line project in Miryang, South Gyeongsang Province.

“We cannot tolerate the administration’s continued lies about its policies, from the privatization of public firms to its interference in (the 2012) presidential election,” said Min, who declined to be identified by his full name.

Some 15,000 police officers were deployed and police buses were lined up along the roads near the area, a measure the umbrella union claimed was taken to prevent citizens from seeing the event.

Cars were blocked from the road in front of the Plaza Hotel, occupied by protesters who sat and sang numerous protest songs. Police were positioned in the subway stations as well, to prepare for laborers rushing down in the case of an emergency, according to police.

The main event began at 5 p.m., with the workers rallying down the road from Seoul Plaza to the Government Complex near Gyeongbokgung Station. The tension reached its peak in the evening when the event turned into a candlelight vigil.

The one-day strike crippled traffic at one of Seoul’s most crowded areas, where parts of it were blocked by police.

The move was supported by the Korea Railroad Corp. union, which held its longest railway strike last year against the government’s project to establish a subsidiary to operate the new KTX service departing Suseo, southern Seoul.

The railway workers claimed that KORAIL is oppressing the union by seeking strong disciplinary actions on 198 union leaders and filing a damage suit that exceeds 15.2 billion won ($14.2 million).

Early Monday morning, KORAIL deployed some 1,800 substitute workers for train services, but freight service operations were down 16 percent from the daily average, according to officials.

“The union announced the one-day strike in advance and we already transported most of the cement and coal products yesterday,” said Im In-sun, KORAIL’s public relations official, adding that the impact on its freight service will be limited.

The strike came after the government’s continued warnings against the general strike, calling it an illegal walkout without a justifiable purpose. The government has reiterated that it does not have plans to privatize railway and medical services.

As the tension escalated, Labor Minister Phang Ha-nam said that the government will act in accordance with the law in regards to the strikers.

“We urge the KCTU to solve the issue through talks amid the budding relations with the government,” he added.

Some labor experts said the government is also responsible for the deepening war of nerves with labor groups.

“The government is only stressing the principle of law, rather than building trust-based relations with the unions. The government should shift its attention from the legality of the union’s actions (toward the big picture),” Kwon Hyuk, a professor of labor law at Pusan National University, told a local media outlet.