The appointment was made as he visited Korea to attend the Network of Korean American Leadership (NetKAL) Summit and Gala event on Wednesday.

“I am flattered to be named an honorary ambassador in Korea,” said Kenny G at the press conference held along with the event. 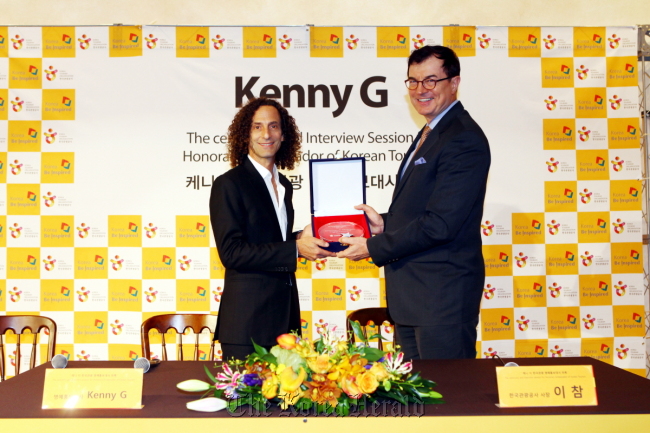 Jazz saxophonist Kenny G (left) and The Korea Tourism Organization CEO Lee Charm pose for a photo holding a plaque given to Kenny G, who was named an honorary ambassador of Korea tourism on Wednesday in Seoul. (The Korea Tourism Organization)
Since the musician first visited Korea for a concert 17 years ago, he said he has been drawn to the great excitement and energy of people in the country.

“I remember thousands people at the reception screaming and I can’t forget that energy,” said Kenny G.

He said he also sees great energy in urban culture especially through Psy’s “Gangnam Style.” Kenny G added: “All my friends can’t believe I am here (in Korea).”

“As a representative of tourism, I can go around the world with the official title and tell everyone what comes naturally to my heart, which is Korea is great,” said he said.

Kenny G held his first concert in Korea in 1995 and has visited over 10 times for concerts. In 1994, Kenny G received the Grammy Award for Best Instrumental Composition for “Forever in Love.” His other hit songs include “Loving You” and “Going Home.”