The 35-carat “Beau Sancy” diamond was worn by Marie de Medici, Queen consort of Henry IV, at her coronation in 1610.

Five bidders spanning three continents competed for the historic jewel at a Sotheby’s auction where there was little evidence of the current global financial woes. 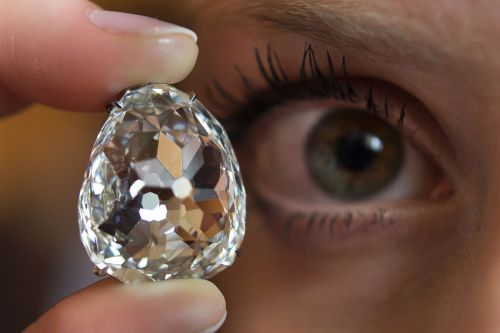 A picture taken on May 10 shows a model posing with the Beau Sancy diamond during a Sotheby’s auction press preview in Geneva. (AFP-Yonhap News)
An anonymous telephone bidder purchased the jewel, put on the market by the House of Prussia and described by Sotheby’s as one of the “most fascinating and romantic” gems ever to come to auction.

“You are buying an historic work of art ― you are not buying a diamond,” said Philipp Herzog von Wuerttenberg, chairman of Sotheby’s Europe, following the sale.

The Beau Sancy attracted bids from North America, Europe and Asia, he said, refusing to give further details about the buyer.

The diamond’s royal connections date back to 1604 when it was bought for Henri IV of France at the insistence of his wife Marie de Medici who wore it atop her crown at her coronation.