[ The Korea Herald – Send E-mail ]
Fly on the wall at Prada and Schiaparelli’s table
By Korea Herald
Published : May 9, 2012 - 18:27
Updated : May 9, 2012 - 18:27
NEW YORK (AP) ― Like bookends, Elsa Schiaparelli and Miuccia Prada sit at opposite ends of a long, elegant table for their chat. There are crystal wineglasses and an ornate chandelier. They cover fashion, of course, but get into broader topics of politics and exotic places, feminism and popular culture.

The banter is lively, thoughtful and friendly, although sometimes they have very different opinions and aren’t afraid to voice them. Schiaparelli says the top of an outfit is the most important because in her day (the 1930s-’40s), when Cafe Society was all the rage, women were seen only from the waist up, sitting at a restaurant table. More than 50 years later, Prada put the emphasis on what’s below the belt because that’s what she found more dynamic and exciting. 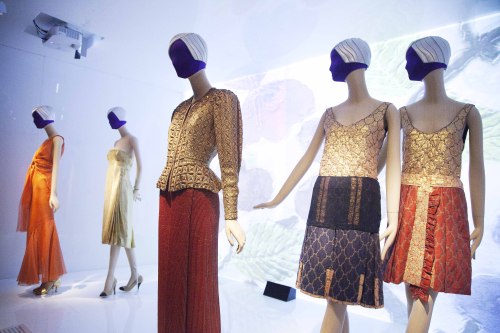 Fashions by Miuccia Prada and Elsa Schiaparelli are displayed at the Metropolitan Museum of Art, Monday. (AP-Yonhap News)
Counters Schiaparelli: “(When I began my career, I) did not know anything about dressmaking. (My) ignorance in this matter was supreme. Therefore my courage was without limit and blind. (My) designs (became) more and more daring. Up with the shoulders! Bring the bust back into its own, pad the shoulders and stop the ugly slouch! Raise the waist to its forgotten original place! Lengthen the skirt!’’

Together, Schiaparelli and Prada make a compelling “Impossible Conversation,’’ which is what the curators at the Metropolitan Museum of Art call the unusual exhibit at the Costume Institute that opens to the public Thursday.

Inspired by a Vanity Fair series from the 1930s that paired disparate celebrities, the exhibit unfolds in intimate short films directed by Baz Luhrmann that star Miuccia Prada herself and actress Judy Davis, portraying Schiaparelli, who died in 1973. The two women are accessorized by a deep display of archival outfits, ranging from an embellished skirt from Prada’s 2012-13 spring collection to the surrealist hats Schiaparelli made with Salvador Dali in 1938.

The presentation and subject matter couldn’t be more different from last year’s big success story, a retrospective of Alexander McQueen, the Met’s most popular fashion exhibit ever.

“It’s not at all like McQueen,’’ says curator-in-charge Harold Koda. “That was fantasy and not intrinsic to what people wear. This show has a much more subtle representation of artistry that infuses fashion, but it’s always subsumed under the reality of clothing that no matter how extreme, it can still be worn.’’