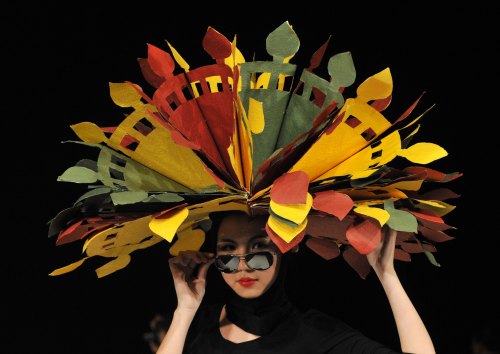 A model displays a creation by a group of Kyrgyz designers 'NAH' during a Fashion Week in Bishkek, on April 4 2012. (AFP)

Most of us can pair one bold color with another -- it just takes a little confidence. But colorblocking, that’s more of an art, and it’s one to be mastered this spring season.

The highest standard of colorblocking was set by Yves Saint Laurent, who transferred the graphic, pop-art look of painter Piet Mondrian onto fabric. The YSL look was an instant hit as it fit so nicely into the fresh, no-frills mod fashions of the mid-1960s.

Since then, Lisa Perry, known for her bright traffic-stopping color combinations on simple silhouettes, says the style has become a classic that sometimes hits as a bona fide trend. This is one of those years, she says. It’s part of a broader movement away from the earth tones that dominated runways and stores for a while.

“I never consider it trendy because we’ve done it since season one. It happens to be a trend now because things go in cycles, so you’ll see it more and more. That’s great,” Perry says, “but I think it’s timeless and always looks good.” 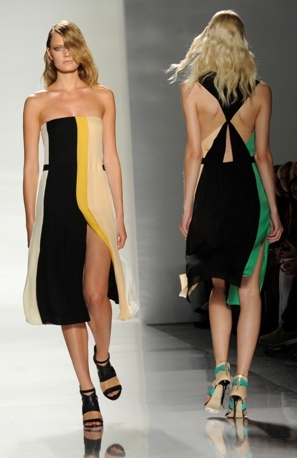 A general definition of colorblocking is the pairing of chunks of contrasting colors. Perry likes it all on a single garment _ her specialty being a dress _ while she calls an outfit of, say, a pink top, red pants and a blue belt more “color mixing.” But, she allows, it’s a fine line.

Tana Ward, chief merchandising officer for American Eagle, which hopes to ignite this trend among younger shoppers who can be fearless when it comes to color rules, likes to see a rainbow of layers: a bandeau, a tank top over it and then the anorak or hoodie.

“I love when the colors are unexpected, when they’re opposites of the color spectrum. ... There aren’t a lot of rules. A lot of mixing and matching looks very fresh. Cobalt blue and orange, or you can do neon lime and cobalt blue.”

Even if colors look good, though, Perry advises you to be aware of the message you might be sending with your combination. Do you look like a sports mascot or a holiday decoration? 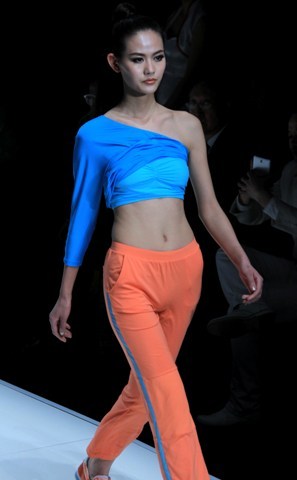 Sometimes she’ll use gray as the binding neutral color, especially with turquoise or hot pink which have a little bit of a tropical vibe, she says, and her best-selling dress is black with hot-pink pockets.

Barneys New York devoted a good chunk of real estate (and some of its famous Madison Avenue windows) to these playful looks.

One of the key colors is mint green, says Amanda Brooks, the retailer’s former fashion director. It can be the bridge to either pastels or surf-inspired neons, she says. All of these notice-me colors are good for business, she adds. “A lot of customers are drawn into stores and to racks with color. No one would walk up to a rack of black.”

What combination will she be wearing? Tonal shades, such as red with fluorescent pink. She’ll probably go for a dress because there’s less legwork in putting it all together, Brooks says, and if you add gray, white or beige as a third color in the mix then it makes it easier to find complementary accessories.

Giovanna Randall, founder and designer of the collection Honor, sometimes uses color to carve out a mood. In this year’s late winter and early spring it was a lot of yellow-and-white combinations to offset the gray and brown landscape. In the fall, when the leaves are all those shades of brown and orange, she pulls out bright raspberry and pairs it with deep jewel tones.

Her runway looks for fall featured chunks of royal blue and purple set against black, which should take out the color fear factor for just about everyone.

“I hardly ever think about things in such a deliberate way as ‘colorblocking,’ but I do love mixing colors,” Randall says. (AP)