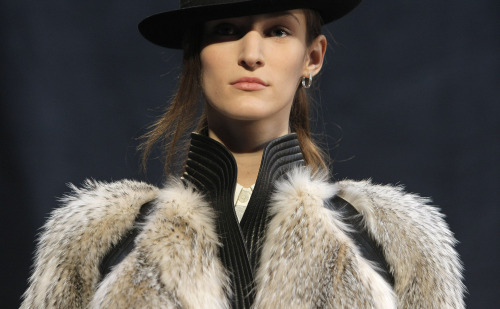 A model wears a creation by Hermes as part of the Fall-Winter, ready-to-wear 2013 fashion collection, during Paris Fashion week, Sunday, March 4, 2012. (AP)

The gaucho or Argentine cowboy inspired a cool and confident mix of clothes at the Hermes show, set in the Ecole des Beaux Arts in the heart of Paris’ Saint Germain area. The location seemed to have rubbed off on the collection, with a graceful Left Bank chic softening the edge of ponchos, chaps and coats held like matador’s capes.

Givenchy’s Riccardo Tisci, meanwhile, turned on the horsepower for a pulse-quickening show complete with retro variations on jodphurs, riding jackets and racing boots.

In other collections, French designer Alexis Mabille revamped the school-girl bow ribbon, and Akris channelled the square silhouette -- one of the defining looks this season.

In his third collection for Hermes, the house of the jet-setting fashion buyer, Christophe Lemaire flew business-class to Argentina. His first piece introduced gentle, hanging silhouettes: a long fringed cape in dark blue was worn like a South American poncho. 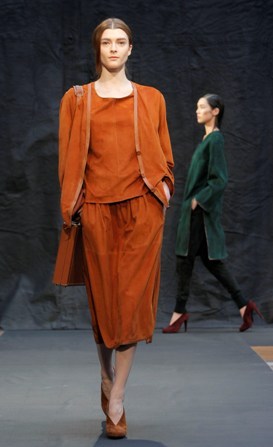 A model wears a creation by Hermes during Paris Fashion week, March 4, 2012. (AP)

Wide, low-slung pleated gaucho pants mixed with sumptuous nude leathers -- the house’s signature material -- that were so soft, they moved as if they were living and breathing.

True enough: as the models walked past there was a distinct aroma of polished hide.

There were nods to the season’s must-have, the boxy-jacket, with one charcoal number reworked on a high white collar, in the style of Spanish equestrian garb.

But Hermes, in typical style, was all about comfort.

The relaxed look was perfected with subtle contrasting pieces: a coat was so cool it hung from one shoulder, yet also had the fierceness of a matador’s cape.

Sunday saw Lemaire’s interest in the East restyled in a series of pajama-inspired dresses with intricate Persian prints that could be worn by women of all ages. And indeed the show saw models in their 40s walk down the runway.

Speaking backstage, Lemaire laughed: “We are timeless. Hermes is for individual women, whatever their age.’’ At which point, he was cut off by 65-year-old fashion icon Jane Birkin, who came to give him a kiss.

A year ago it was panthers. Now horses have captured the imagination of Givenchy designer Riccardo Tisci, whose show Sunday presented a highly charged and at times fetish-ized take on equestrian riding gear. 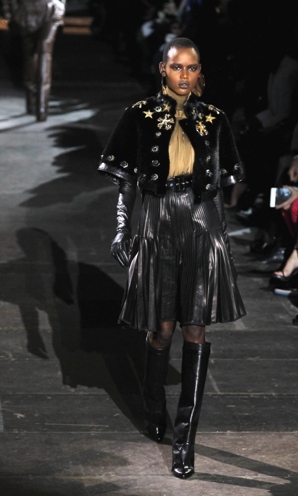 A model wears a creation by Italian fashion designer Riccardo Tisci for Givenchy's fashion house, March 4, 2012. (AP)
Jodphurs in black and sable brown shaped the silhouette of the collection’s first half, with oversized earrings like horse-blinders complementing high riding boots.

As ever with Tisci, there was a sense of danger at all times with chokingly tight neck scarves, loud, troubling music, and even one skintight leather piece -- based on a sporting polo -- that looked like bondage gear.

Intentionally crude stitching in one leather dress was followed by a series of intense-color slip dresses with clashing belts -- harking back to the palette of British glam rock.

Indeed, associations with rock music have been a key factor in keeping Givenchy on the public radar in the past year.

Madonna’s widely viewed performance at the American Super Bowl football championship last month was a marketing coup for the house, the singer dressed head to toe in Tisci’s couture.

With P.Diddy and Alicia Keys on Sunday’s front row, it’s clear that Givenchy’s a ticket the music stars can’t resist.

The young girl next door with a pretty red bow: that was the inspiration for Alexis Mabille’s fall-winter collection Sunday, which reworked the youthful bow in every imaginable way. 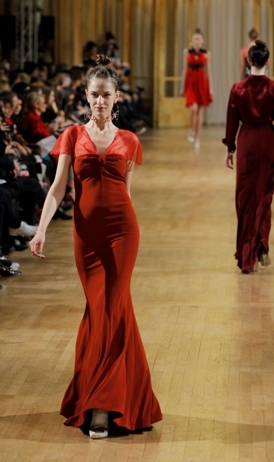 A model wears a creation by French fashion designer Alexis Mabille, March 4, 2012. (AP)
Girly tied-lace belting shaved years off the look of a flounce dress with chestnut bow embroidering, while diamante bow earrings put the icing on the cake of the carefree, chic gamine look.

This insouciance translated to a short skirt wardrobe. It was a blatant “sticking your tongue out’’ at the normal autumn covered-up look, with pleated miniskirts and short dresses in plum and black exposing yards of leg.

Just in case spectators still didn’t get his point, the funky soundtrack blasted out a chorus of “mini mini mini mini,’’ to chuckles on the front row.

In the more wintery part of the collection, he showcased a series of plumed pieces. But at times the texture-mixing looked like he was trying too hard.

One jacket embroidered entirely with messy, wild feathers and fox fur looked almost like a vixen had raided a chicken pen.

Proving that you don’t need curves to be chic, the square look gracing runways all season hit its pinnacle in the fall-winter collection by Akris on Sunday.

A rust and nude cashmere silk floor-length dress hung like a column, focusing the eye on never-ending legs.

The colors were taken straight from Kline canvases with a charcoal color block cape, based on “Painting No.7,’’ reprinted in the program notes, and a pantsuit offering a dash of warmth.

“Kline’s work was an exciting discovery for me,’’ said the Swiss designer, “a 1950s artist that captures in painting, the architecture and the dynamics of fashion today.’’

With collections like this, Akris’ already sizable fan base will no doubt continue to grow. (AP)