[ The Korea Herald – Send E-mail ]
Designer merry-go-round rings in Paris
By Korea Herald
Published : Feb 29, 2012 - 17:11
Updated : Feb 29, 2012 - 21:01
Paris Fashion Week kicked off on Tuesday with the in-crowd abuzz at the prospect of style icon Hedi Slimane designing for Yves Saint Laurent, and rumours putting a newly-free Raf Simons in the wings at Dior.

Opening with a day devoted to young designers, the Paris autumn-winter collections round off a month of womenswear shows that have sent fashionistas, models and media trooping on a style trail from New York to London and Milan.

Long-sleeved, high-necked dresses hugged the figure to the knee, in dark leather with lighter strips at the side and burgundy fur draped cape-like from the shoulders, or in pale prints that suggested a network of delicate veins. 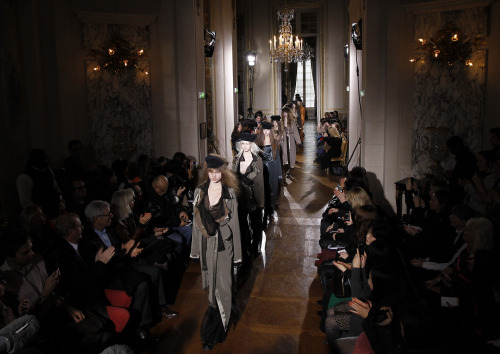 Models wear creations from designer Moon Young-hee as part of the Fall-Winter, ready-to-wear 2012 fashion collection, during Paris Fashion week, Tuesday. (AP-Yonhap News)
Blood-red lipstick, red stiletto heels and tiny hats balanced on the forehead, shaped like disks or pointed leaves, added a geisha feel to the look, shown under the vaults of the historic Invalides complex by the River Seine.

But the designer also hinted at a rock-and-roll edge, as the cellist signed off with a few bars of Nirvana’s “Smells Like Teen Spirit.”

Adding spice to this week’s proceedings, a fashion world merry-go-round kicked off in Milan last week as Germany’s Jil Sander announced its Belgian designer Simons was leaving to make way for a return of the house’s founder.

The discreet, avant-gardist Simons had been widely tipped a few months back as a successor to John Galliano, sacked from Dior a year ago over a drunken, racist outburst in a Paris bar.

Showing his swansong collection for Jil Sander Saturday, Simons earned a standing ovation for the pure, sensual lines of a look built around coats and dresses, all in soft pale blues, pink blushes, and creams.

His sudden availability has set Twitter abuzz with speculation, although a spokeswoman for Dior insisted no announcement was planned for Fashion Week.

Change is afoot at the Parisian luxury house Yves Saint-Laurent, however, after it confirmed that its Italian designer Stefano Pilati would show his last collection next Monday, without naming a successor.

Industry sources told AFP at the weekend that he would be replaced by Slimane, a designer admired by rock stars and fashion trade peers alike and who is returning after several years away from fashion.

Slimane, whose father is Tunisian and mother Italian, worked at YSL in the late 1990s but made his mark at Dior from 2000 to 2007, revolutionising menswear with his androgynous skinny suits and tight low-cut trousers. (AFP)