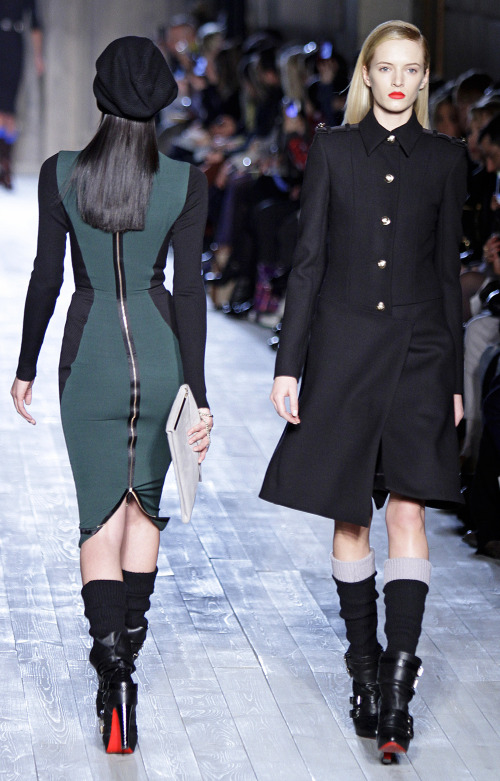 Fashion from the Fall 2012 collection of Victoria Beckham is modeled on Sunday in New York. (AP-Yonhap News)
NEW YORK (AP) ― It’s time for the well-heeled women who shop from New York Fashion Week runways to pull themselves up by their bootstraps ― preferably Christian Louboutins ― and carry off clothes rooted in strength, confidence and even toughness.

Even glamorous Victoria Beckham, rarely seen without stilettos on, sent some of her models down the runway Sunday in motorcycle boots. (They were indeed Louboutins.)

The fiercer, fitted looks are a contrast to the flowing, airy silhouettes that dominated the spring season. Adam Glassman, creative director of O, The Oprah Magazine, said it likely is time for something new.

Structured pieces also hang well on racks in stores ― and are flattering on many figures, he noted. “The military shapes and jackets give good shape to a woman, from her shoulders to her waist,’’ he said.

In addition to military influences and menswear looks for women, other themes emerging by Day 4, halfway through the previews for next season, include leather (Derek Lam, Thakoon Panichgul), python prints (big at Carmen Marc Valvo) and other textured fabrics. Skaist-Taylor, the new brand from Juicy Couture founders Pam Skaist and Gela Taylor, used a print they called “cowhide.’’

Traditional fall hues like black, loden green, wine and plum have ruled the runways, but white, an unusual choice for the season, has had a strong showing, too. Lela Rose on Sunday showed an ivory silk crepe collared sheath, an ivory silk cloque dress with embroidered shoulders and a white silver mosaic embroidered dress.

For her DKNY brand, Donna Karan wrapped up models in high-neck aviator coats and fitted blazers but gave them flirty short skirts with bouncy hemlines. She put them in cozy collars and feminine bow-neck blouses.

Even more diversity came from the textures: embossed crocodile, shiny leather, cozy shearling, sexy sheers and slim twill. When she tired of black, which Karan really never does, she switched to navy, gray or the occasional flash of red.

Reese heavily embellished sleeveless and short-sleeve cocktail dresses with metallic beading front and back. She put feminine fringe on loose, cozy sweaters and combination bowler-baseball caps on the heads of her models.

Much of her outerwear was a crowd pleaser, including a shimmery gold coat belted at the waist. She did another in lemon yellow and a third was cropped with a feminine peplum.

Reese had fun with jacquards, enlarging one in black and white in a cropped jacket and mini skirt. She used colored jacquards and leaf motifs throughout.

Diane von Furstenberg, who as president of the Council of Fashion Designers of America is the de facto leader of the U.S. fashion community, used jigsaw puzzle pieces as a prominent theme of her fall collection.

There was a puzzle print on a pink sleeveless dress, and laser-cut pieces on a black embellished one. A model carried a puzzle-box bag.

Thakoon Panichgul, a favorite of first lady Michelle Obama, designed a line heavy with bright neon colors and rich materials. Panichgul mixed the refined, like a black satin sleeved dress, with the modern ― a striking red and orange print he calls “neon beam.’’

Red leather, red lipstick and shiny red high heels were also prominent. He paired a fuchsia fur knit sweater with a raspberry patent skirt that had a paper bag waist. He ruched red leather at the biceps and waist for a dress and used a hearts-and-lips print for a jacquard bomber jacket.