A gorgeous version of the American stage classic opened at the Richard Rodgers Theatre on Thursday for the first time in more than three decades with plenty of hand-wringing that this updated version led by director Diane Paulus and playwright Suzan-Lori Parks was messing with a Gershwin masterpiece.

Nothing could be further from the truth. In fact, Paulus and Parks have protected and cared for this theatrical baby as well as the actors on stage coo over Clara’s swaddled infant boy. The controversy? Plenty of nothing.

Audra McDonald and Norm Lewis lead this reconception of life in Depression-era Catfish Row and the fact that subtle changes have been made are clear as soon as Lewis appears using a cane to navigate across the stage with his malformed, twisted left leg ― and not the goat cart of old. 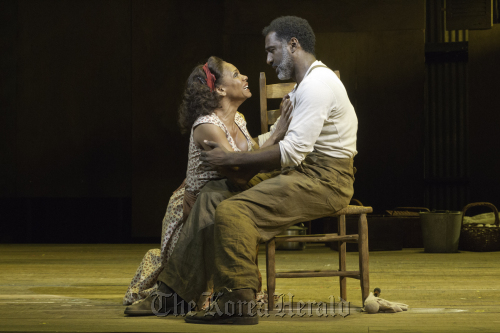 Audra McDonald (left) and Norm Lewis in a scene from “The Gershwins’ Porgy and Bess” in New York. (AP-Yonhap News)
Purists upset to hear about this artistic travesty ― good grief, no goat cart?! ― should leave the theater immediately. The rest of us can then sit back and enjoy a first-rate cast give life to one of America’s greatest love triangles and hear beautiful songs such as “Summertime’’ and “Bess, You Is My Woman Now.’’

Besides a terrific McDonald and Lewis, the cast also includes Phillip Boykin, who plays a fearsome Crown (physically he looks like a tank) and David Alan Grier is surprisingly wonderful as the funny, slithery, “lowlife buzzard’’ Sporting Life. The lovely Nikki Renee Daniels and the always-welcomed Joshua Henry play the doomed couple Clara and Jake and leave us wanting to see and hear more.

The production, which had a tryout run at the American Repertory Theater in Cambridge, Mass., in late summer, began when the estates of songwriting team George and Ira Gershwin and wordsmiths DuBose and Dorothy Heyward began seeking a team to change the dated 1935 opera to fit commercial Broadway.

Paulus and Parks have indeed made it more musical than opera, though they haven’t expunged all the recitative, transforming it into more of a hybrid that takes some getting used, especially when opera emerges from one character and the reply comes in musical theater.