ICHEON, Gyeonggi Province ― After an overnight downpour, music fans left their flooded tents to enjoy a reprieve from the rain at Jisan Valley Rock Festival on Saturday.

The solid stream of Korean acts was complemented by a very British international presence on the main stage throughout the three-day event, including Saturday’s headliners The Arctic Monkeys. 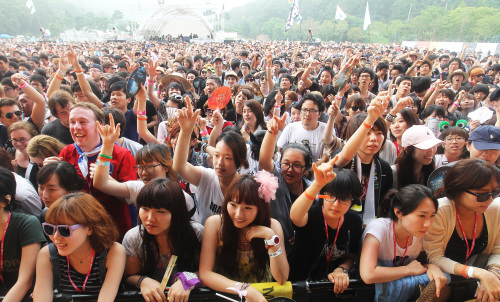 The audience at British alternative rock band The Music’s performance Friday at Jisan Valley Rock Festival. (Yonhap News)
Although the lineup for the event at the picturesque mountain resort in Icheon, Gyeonggi Province was met with some skepticism when announced, the crowds seemed more than happy as scorching temperatures set fans a-flutter. Even the muddy terrain was no obstacle for many of the ever-glamorous Koreans in attendance ― 6-inch red stilettos included.

The Big Top stage hosted the main shows, with U.K. veteran musicians The Chemical Brothers and Suede as headliners on Friday and Sunday, respectively.

One of the first acts up on the stage Saturday were Welsh rockers Feeder, who received a buoyant response, and set the audience jumping with early 2000s anthemic hits including “Buck Rogers” and “Just the Way I’m Feeling.”

Looking bronzed and carefree, the trio gave an energetic performance, with frontman Grant Nicholas flitting between a selection of glitzy guitars for each song and their rugged drummer playing for all he was worth. They dedicated their last song “Just a Day,” to fellow Brits The Arctic Monkeys. 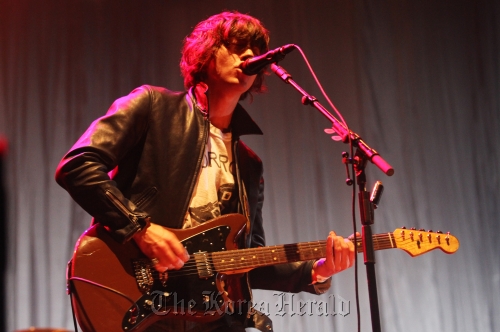 The Arctic Monkey’s frontman Alex Turner performing Saturday at Jisan. (Mnet)
Pia, a nu-metal band originating from Busan, screamed their way through their performance to a packed field of sweaty, raucous fans.

In contrast, as the sun began to slip behind the mountain backdrop, Korean festival favorites Asian Kung-Fu Generation went down well with their upbeat brand of indie rock.

They started their set with the fun and poppy-sounding number “Shin Seiki No Love Song,” whilst bubbles were set adrift from amid the crowd and dragonflies buzzed breezily above. The Japanese band made sure to slip in some Korean chit chat too, which met with an appreciative audience.

The headliners closed out the second night to an excitable crowd. The four young northern lads did not disappoint with their debut Korean performance despite a brave set of mostly new songs from their 2011 album “Suck it and See.” They kicked off with “Library Pictures,” track six on the recording.

The band hit the big time in 2005 with U.K. number one hit “I Bet You Look Good on the Dancefloor,” and is credited with being one of the first acts to gain popularity via the Internet.

The crowd lapped up the indie rocker’s gritty guitar sound and clever lyrics. They sang along mostly to “When the Sun Goes Down,” a noraebang favorite and cheered as the band vowed to return to Korea.

The Green Stage was a more subdued alternative to the main stage from the afternoon through to the early evening. It was situated next to a swimming pool, filled in the late afternoon to the delight of those seeking respite from the heat, and had a mellow atmosphere.

Top of the bill there was Korean-American Priscilla Ahn. The singer-songwriter’s dreamy numbers have featured as backing music for shows including “Grey’s Anatomy” and “One Tree Hill.”

The mostly Korean bill preceding her was met with a warm response. Alternative five-piece band Dear Cloud, who came on right before, were a special treat with lead vocalist Nine’s dusky voice and emotive lyrics soothing worn-out revelers toward the end of the day.

The Jeong Won Young Band, with powerful lead vocals and an Irish lilt to their sound, lulled fans into their set with swaying and hand-waving before stepping up the tempo with hand-clapping and a pounding beat.

One of the last acts of the night, and billed as a Special Lineup, were UV. The fun comedy duo “project band” attracted a huge crowd.

The Open Stage offered a place to take a break and tuck into some of the surrounding food options to a soundtrack of gentle strumming. Whether from here or up on high overlooking the Big Top, there was plenty of people watching to be done.

Festival staples the world over ― vibrantly patterned rubber boots, oversized sunglasses and straw hats ― were ubiquitous. But what marked Jisan as a very Korean affair, apart from the lineup, was the happy-go-lucky yet respectful vibe sometimes lacking at more hedonistic Western festivals. And the couple fashion, of course.

For those wanting to continue sipping on their cocktails-in-a-bag and dance into the night, the Hype Stage ― a new addition this year ― kept revelers up until 4 a.m.

Since the festival’s inception three years ago, the format has remained much the same, just with bigger crowds and an increased corporate presence. Coca-cola and Dr Marten transfers were the faux tattoos of choice this year.

But despite a shortage of bus services home and slightly disappointing food options, the day seemed a hit with most ― no doubt many more festival newcomers this year have now been seized by the simple and addictive pleasure of listening to good music in the sunshine.