It was four decades ago that the first Comic-Con was held at an aging downtown hotel, attracting only a handful of major guests. This weekend, some 130,000 fans will roam the San Diego Convention Center at what has become the planet’s premier pop-cultural carnival. 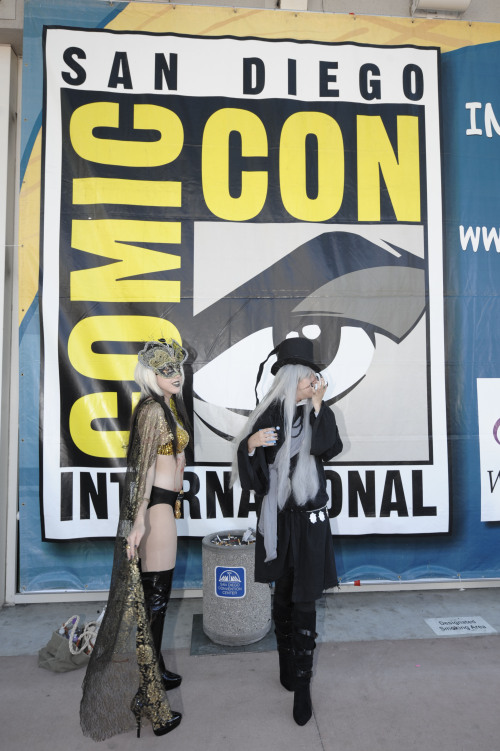 Two costumed characters wait in front of a Comic Con logo before Preview Night at the Comic-Con 2011 convention Wednesday in San Diego. (AP-Yonhap News)
But make no mistake, Batman, the Con is still very much the comic-book fest that it once was.

Determined not to be eclipsed by Hollywood, hundreds of the industry’s artists, writers and creators are attending Comic-Con this year, along with publishers ranging from DC Comics and Marvel to Image, BOOM! Studios, IDW Publishing and Oni Press.

“The comics are what I like to call the gooey center of all pop culture,” said Joe Field, who owns a comic book store in Concord, California, and has gone to the convention annually for the past 25 years.

“Movies, TV and video games all spin out of the creativity of telling stories with words and pictures,” said Field, who founded the industry’s annual Free Comic Book Day. “That’s why the San Diego Con has become this sort of beehive of pop culture activity, because comics are really the genesis of visual entertainment.”

Running through Sunday, the convention provides a one-million-square-foot playground where comic creators, consumers, collectors or just the curious can interact with each other - many in costume.

“The thing I love about Comic-Con is people are allowed to become superheroes; the streets are thronged with all kinds of people dressed up as their favorite comic characters,” said Grant Morrison, a longtime writer of comics who is helming the upcoming relaunch of DC’s “Action Comics” in September.

“I’ve always loved that nonjudgmental thing. The world becomes this weird Fellini-esque reality for a few days,” he said.

Amy Boa, 18, of Dallas, was swept into the world of comics by actor Robert Downey Jr.

“When he did `Iron Man,’ I started following all that stuff,” she said earlier this week, before heading to San Diego. Now, she’s buying digital comics to read even though she “never really read comics before.”

The draw is so powerful that comic book websites send scores of writers to document every announcement and move by the creators. SiriusXM plans a Comic-Con channel to air panels along with interviews with attendees.

The event is also a chance for would-be creators to have their portfolios reviewed and seek advice from established pros.

Nicholas Kole, 23, went to Comic-Con last year with his portfolio in hand and ended up getting an assignment to provide a story for the annual “Flight” anthology ― a thick, full-color digest of stories contributed by both experienced hands and unknown newcomers.

This week, he’s participating as a writer and artist and plans to do some networking as well.

“A lot of people complain these days that it’s gone too commercial and it’s not enough about comics anymore. But last year was my first time there, so I’ve never known Comic-Con to be anything different!” he said.

“That, combined with a confluence of weird obscure geek culture and obese men in Sailor Moon outfits? It’s heaven,” he said.

For the publishers, Comic-Con is a media-rich buffet in which to offer up new books, preview upcoming stories and give away freebies tied into their products.

Mike Pasciullo, senior vice president of brand planning and communications at Marvel, said that while the added mix of TV and film may have shifted the axis of the event away from comics, it’s those 32-page tales that remain the backbone.

Jim Lee, DC’s co-publisher, says that while comics remain at the core of Comic-Con, people do come for other reasons and may stumble across the books.

“It’s a great opportunity for us to evangelize and proselytize and seek out new fans, new readers,” says Lee, “because a lot of people are coming because of TV shows that have very similar demographics to what we usually get for comic book readers.“