“We’ll be having fun this summer,” said Mya.

“Mya will be swimming with Grandma,” said Cheryll Moore. 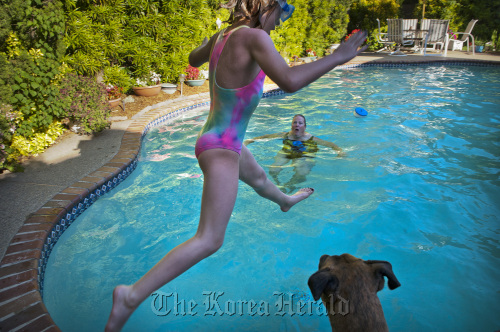 At home in Carmichael, “Grandma Cheryll” Moore enjoys the pool and keeps an eye out for Mya Honsvick, 10, to make a splash as Kuda, the family dog, watches. This fall, Mya will cheer on her energetic grandmother in a triathlon. (Sacramento Bee/MCT)
Mya also helps Grandma Cheryll ― GC, Sean’s suggested nickname, didn’t really stick ― by stapling and assembling papers related to her volunteer work. And with her parents, she’ll be cheering this fall when Grandma Cheryll competes in a triathlon.

Blended, multigenerational households, career-oriented grandmothers and energy to spare: Just as they reinvented the teen years and the midlife crisis, the nation’s 70 million baby boomers, born between 1946 and 1964, are reinventing grandparenthood.

Which is to say, boomers just don’t feel like grannies and grandpappies.

“In the olden days, having grandchildren would initiate the sunset of people’s lives,” said Arthur Kornhaber, founder of Ojai, California’s Foundation for Grandparenting and a psychiatrist who has studied grandparenting since the 1970s.

“But the rules have changed, and there’s an identity crisis.”

For the 32 million baby boomers who are already grandparents, the approach to this stage of life is necessarily different.

For one thing, boomer grandparents are younger: The average age of first grandparenthood has dropped in recent years from 48 to 47, according to AARP. They’re vital and active. They’re likely still working. Their rockers are still rocking, and not on the front porch.

“Grandparents’ role as living ancestor and family historian has been diminished,” said Kornhaber. “For baby boomer grandparents, the crony role is big, being like kids together with their grandchildren.”

Running around with the grandkids ― hiking, swimming and playing sports with them ― keeps boomers young. So does keeping current on their tech skills, so they can text the grandkids and be their Facebook friends.

While there are fewer grandchildren per grandparent than at any time in U.S. history, according to the Census Bureau, most grandchildren in this age of divorce, remarriage, single parenthood and other family complications have more than four grandparents.

Differentiating between the assorted grandparental parties is one reason for the wealth of nicknames ― Nana, Lala, Mimi, Popsy and the like ― that can make boomers sound more like Teletubbies than grandparents.

Also, no one called Lala can ever sound old.

Because of a variety of factors, including economic hardships and the military deployment of parents overseas, 7.5 million grandchildren now live with their grandparents, U.S. Census figures show.

The Moores’ living arrangement, for example, came about three years ago because Sean, a 32-year-old automotive mechanic, and Beth are trying to save money for their own house.

And yes, unlike most boomers’ grannies, today’s grandmothers have ― or have already retired from ― their own careers.

“My grandparents to me seemed very old,” said Linda Shaw, 63, a retired Sacramento County employee who lives in Antelope, California “We did the things with them that we think grandparents do, like making cookies.

“I don’t ever do that with my grandkids. We go places together. My husband and I rent a cabin in the Sierra hills, and they come visit us. What they need and want runs the show, always. It’s very different from when we were kids.”

For baby boomers, the shift into the grandparent years involves changing the image of grandparents, says Allan Zullo, who wrote “A Boomer’s Guide to Grandparenting” with his wife, Kathryn.

For many, it also involves a lot of responsibilities.

“When we were growing up, we had a social safety net,” said Zullo, 63, a grandfather of five who lives in North Carolina. “You could walk to school. All the neighbors knew who you were. Mothers were still home.

“The boomer grandparent has to step up now because that social safety net is gone. It’s a different world.”

Shaw and her husband, Don Kremer, make a point of attending their grandkids’ school events and helping get them to various appointments when their parents are at work.

“With both parents working, grandparents can take the grandkids more places and step into a role of going to more functions,” said Kremer, 59. “And it’s a pleasure to see them with their friends.”