Yoon Bit-garam scored a penalty after Kim Tae-hwan had equalized in the second half, and substitute Kim Dong-sub added one to win the first leg of the play-offs against Jordan.

The host dominated the game completely in the first half, taking chance after chance against the lackluster Jordan defenders. But Korea lost its concentration in the late first half, and Jordan took the lead with Mahmoud Zatara’s strike just before the break. 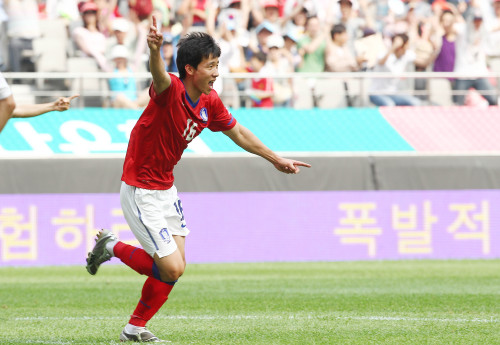 Korea U23 team midfielder Kim Tae-hwan celebrates after scoring against Jordan on Sunday. (Yonhap News)
Korea had its first chance 11 minutes into the game. Jeju United defender Hong Jeong-ho was left unmarked inside the penalty box, and made a strong close-range header from a corner, but it went wide.

In the 23rd minute, Chunnam Dragons striker Ji Dong-won played a clever one-two pass just outside the box, but sent his long-rage shot over the bar.

Just before the end of the first half, Korean defenders lost their marks, and unmarked Zatara shot low into the Korean net.

But Korea improved in the second half, dominating ball possession while the Jordan defenders left some gaps at the back. In the 55th minute, FC Seoul midfielder Kim found a loose ball just outside the box, before firing a low shot past the goalie.

Twenty-minutes later the 22-year-old Kim earned a penalty after rushing into the left side of the area before being brought down by the goalkeeper. Gyeongnam FC midfielder Yoon converted the penalty shot low and to the right of the corner, giving the team a 2-1 lead.

And in the 74 minute substitute Kim sent a header inside the box past the goalkeeper to end the game.

Korea and Jordan play their second leg of play-offs in Jordan on June 23. The winner will advance to the final Asian qualifying round for the 2012 London Olympics.