With only a small bridge in between, two totally different worlds unfolded in the Banpo area in southern Seoul on Thursday night. On the Floating Island on the Han River, the venue of FENDI’s fashion show, about 1,000 guests chatted pleasantly over cocktails.

Just a few hundred meters away in Hangang Park, about 200 animal rights activists angrily chanted “No Fur! No FENDI!”

As expected, FENDI’s second big show in Asia after the 2007 show at the Great Wall of China not only attracted fur-friendly consumers but also hundreds of anti-fur protesters. 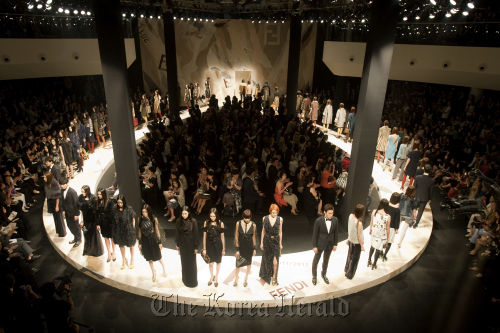 Finale of 2011 FENDI F/W show at the Floating Island on the Han River on Thursday. (FENDI)
While about half of the 50 models strutted down the catwalk decked in fur coats and vests, a model dragged a fake fur item dipped in blood red paint across a huge piece of white fabric with the word FENDI written on it.

When performers hired by FENDI banged on drums to spice up the after-party, the activists across the bridge upped the volume of the video featuring animals shrieking as they were skinned alive.

Several actresses and models from Hong Kong, China and Japan, including Zhang Ziyi and Hana Matsushima, were seen at the show but Korean celebrities were nowhere to be seen. Several celebrities, including singer Lee Hyo-ri, had voiced opinions against the event by retweeting mentions of the harm in wearing fur.

“No Korean celebrities came to the show, which means that they knew what the public sentiment was. I am hoping that they will make less appearances in fur items from now on. I also hope that Seoul City and other government organizations will be more cautious in holding such events,” Park So-yeon, head of Coexistence of Animal Rights on Earth which led the protest, told The Korea Herald.

The show had been mired in controversy since it was announced on May 11, as animal rights groups protested the Italian brand’s fur items. Mindful of the anti-fur mood, Seoul city informed the brand’s Asian headquarters on May 13 that the city could not host the show if it featured fur items. However, Seoul city finally allowed the Italian fashion brand to go ahead with the show because plans to broadcast it internationally had already been made.

The use of vivid colors and simple, modern cuts in FENDI’s 2011 F/W collection were beautiful and desirable, but what caught the eyes most were the fur items, especially after two protesters who managed to sneak in and scream “No Fur! No FENDI!” at the beginning of the show were dragged out by the guards.

Most of the garments shown were fur items, particularly when bags and shoes are included. All of the overcoats displayed on the first floor were fur. Although kids appeared on the runway holding hands with the models in an effort to show “FENDI’s life style range” as the brand put it, the show still heavily weighed on fur.

“It is difficult to say how many fur clothes there were because some of them are items to wear around the neck or arms. We did not decide on the exact number of fur items when we discussed the show with FENDI again. It was just about the overall concept, that it should be a total collection including handbags, etc. In my opinion the show was not much out of line,” said Ryu Gyeong-gi, head of Seoul Metropolitan Government’s Hangang Project Headquarters. 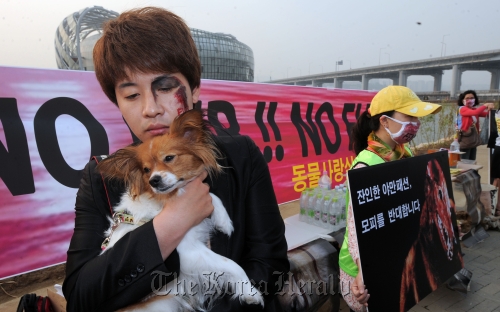 Animal rights activists protest in front of the Floating Island on the Han River on Thursday. (Ahn Hoon/The Korea Herald)
“The show was broadcast worldwide online and was mentioned in many foreign media such as The Wall Street Journal. It is difficult to calculate the city marketing effects right away but it was a chance to expose the Floating Island to the world,” he added.

Photos of the protest bombarded the Internet during and after the show, leaving little room for talk about FENDI’s new collection or on the newly built Floating Island, which Seoul city was eager to promote through this international event. The Floating Island was criticized for limiting access to the public starting at 1 p.m. on the day of the fashion show which was held at 8 p.m.

“It was built using taxpayers’ money to be used by the general public, not for only a small number of people who enjoy luxury goods,” said the protesters.

Michael Burke, CEO of FENDI, thanked Seoul City after the event in a statement.

“I am glad to have chosen and introduced ‘Design Seoul,’ a rising fashion capital, and Han River which is a historic spot of Korea, as we did on the Great Wall in China in 2007. I would like to express my gratitude to Seoul City and everyone for your support to the event,” said Burke.