[ The Korea Herald – Send E-mail ]
Literature an effort to understand common experience: Le Clezio
By 김후란
Published : May 23, 2011 - 18:39
Updated : May 23, 2011 - 18:39
Jean-Marie Gustave Le Clezio, one of the most acclaimed living French authors and the 2008 Nobel Prize winner, said literature is what connects people in today’s globalized world.

He was speaking at a press conference Monday at Kyobo Bookstore in downtown Seoul, a day ahead of the opening of the third Seoul International Forum for Literature in Seoul.

Le Clezio participated in the second forum in Seoul in 2005, and taught French language and literature at Ewha Womans University in Seoul from 2007-08.

“Coming to Seoul always brings me joy,” Le Clezio told reporters. “Its outer experience looks very modern yet I think some things always remain the same here. Like the little restaurants and the very Korean spirit.” 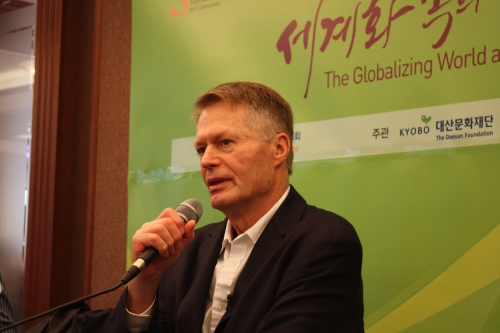 French author Jean-Marie Gustave Le Clezio speaks at a press meeting for the third Seoul International Forum for Literature in Seoul, Monday. (The Daesan Foundation)
With 13 big-name foreign authors and scholars, including two Nobel Prize Winners -- Le Clezio and Gao Xingjian -- participating, the literature forum running through May 26 will consist of lectures, open debates and Q & A sessions for under the theme of “Writing for the Globalizing World and the Human Community.”

Literature is, in fact, what “globalizes” the international public by connecting people together, Le Clezio pointed out.

“Every piece of literature is written in one language, and therefore is given its nationality,” he said. “Yet it has to connect with the people who do not share that nationality. Literature is an effort to understand the common experience of men.”

A piece of literature, after all, has to let its readers understand the universality of human experience, which transcends national and cultural differences, he said.

Le Clezio said the modern international public is often unconsciously manipulated by the mass media, and writers should resist such manipulation by writing.

“Of course a writer does not have much power compared to the mass media and television,” he said. “But writing can be a meaningful way of resisting. We’ll just have to keep writing.”

He thinks, however, SNS has a positive impact on global democracy and freedom, Le Clezio said.

“I think SNS brings more talk to this world,” he said. “It allows us to solve problems by talking, not by fighting.”

In order to break into the international book market, Le Clezio said a writer should keep his or her cultural roots while trying to reach the global public by making their work something universal.

“When I was younger, I could not imagine reading works of French author Marcel Proust. I didn’t exist in his time period, and did not like the lives of petite bourgeoisies at the time,” he said. “Yet reading works of Japanese poet Matsuo Basho made me want to read Proust. I think there is a connection between writers that transcends national and time difference which affects readers like me.”

Le Clezio said his next book, which consists of nine short stories, will be published in the near future. “I’ve written a few of the nine stories in Korea, inspired by what I saw and imagined during my stay here,” he said.