[ The Korea Herald – Send E-mail ]
Foster thinks Cannes film can be ‘therapeutic’ for Gibson
By 김후란
Published : May 18, 2011 - 19:54
Updated : May 18, 2011 - 19:54
CANNES, France (AFP) ― Jodie Foster drew cheers at Cannes on Tuesday for her latest film “The Beaver” and said she thought the experience of making it could be “therapeutic” for her troubled star Mel Gibson.

The small-budget drama, directed by Foster and featuring Gibson as a depressed toy company executive who turns to a beaver hand puppet to help him get his life back on track, had a shaky opening at US cinemas this month.

But critics in Cannes, where the film is screening out of competition, embraced the eccentric picture in which two-time Oscar winner Foster plays Gibson’s confused wife, showering it with frequent laughs and a warm round of applause at a packed presentation. 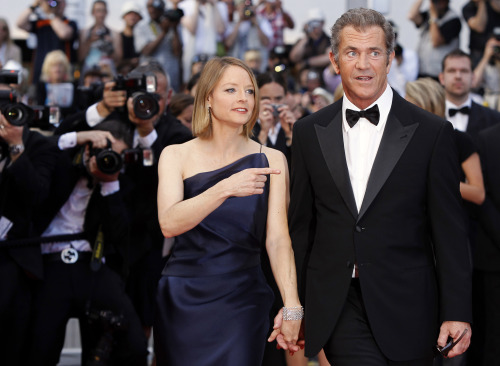 Jodie Foster (left) and Mel Gibson pose on the red carpet for the screening of “The Beaver” at the 64th international film festival in Cannes, France, Tuesday. (AP-Yonhap News)
Gibson, who has faced allegations of domestic violence and been caught in a string of misogynistic and anti-Semitic rants in recent years, skipped the traditional post-screening press conference but was due to appear on the red carpet for the gala festival screening.

“He won’t be talking but he’ll be here,” Foster, 48, quipped as she fielded reporters’ questions in English as well as her fluent French.

Much of the discussion around the film has centerd on the unusual overlap between the on-screen storyline and Gibson’s off-screen travails, and whether his presence in the film would be box-office poison.

Foster said she had counted Gibson, 55, as a close friend for several years and believed their work together on the movie would help him with his inner demons.

“Anything that you do, that you obsess about and give that much to for six months of your life ... allows you to look deeper at yourself and at the people around you and the fact of what you do has to have some kind of therapeutic, cathartic end,” she said.

“I think that he’s proud of the movie. I think he’s proud of what he’s shown and he wants people to see that side of him. He’s an incredibly private man yet he shows on screen (something) as deep as you can possibly get. That’s our way as actors, I think, of telling people, this is who I really am.”

She said his notorious private life clearly fed into the role of Walter, who speaks in a Cockney accent through the beaver puppet at work, at the family dinner table and even in his marital bed to reveal his fears and desires.

“He was definitely the first on my list mostly because he’s somebody who really understands how to handle humor and the lightness and the charm of the character but also has a deep understanding of the struggles,” she said.