It’s certainly a romantic destination, from its spectacular architecture to its beautiful coastlines to its famously fine wine. It can also be an intimidating place to tote little ones, with its cautionary tales about pickpockets, and its very real plethora of crazy drivers and cigarette smokers.

But the culture in Italy is so rich and vibrant, and the history so fascinating and iconic, that it would be a shame to leave the children back home.

My wife and I recently took our 10-year-old daughter, Joie, on an eight-day vacation that covered the big city of Rome and the tiny island of Capri (in southern Italy). It was Joie’s second trip to Europe; two years ago, we spent a little less than a week in Barcelona, Spain.

I hope both experiences will stick with her for life, and have showed her that the world is a big place ― that other countries are in some ways similar to ours, but in some ways very, very different.

We’re not expert travelers, but we learned a few things on this trip that might help if you decide to take the kids on an Italian adventure. 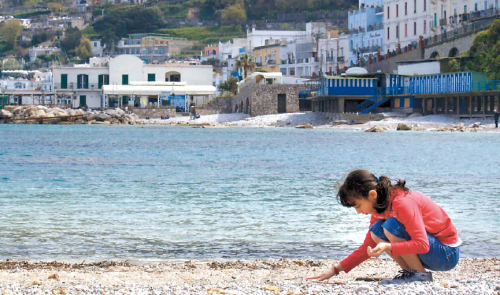 Joie, 10, looks for sea glass on a rocky beach near Marina Grande on the island of Capri, Italy. (Charlotte Observer/MCT)
● Lingua!

One way to get children excited about the trip while also preparing them for the experience is to introduce them to the language.

We downloaded two iPhone apps ― iSayHello and Basic Italian for Dummies ― that help teach basic phrases; “Dov’e il bagno?” (“Where is the bathroom?”) became a favorite, although the most commonly encountered words will be “grazie” (“thanks”), “prego” (“you’re welcome”/“please”) and “ciao” (“hello”).

If you don’t have a smartphone, a fun online tool for kids to play with before heading over is Google Translate (http://translate.google.com).

We bought Joie a $59 digital camera for Christmas, and though it didn’t get much use the first three months of the year, it came in extremely handy in Italy.

There are a couple good reasons to buy them their own gadget to tote around: One, it gives them a project. Places Joie normally wouldn’t have had the patience to wade through, like the National Museum of Rome’s Palazzo Massimo alle Terme and its room after room of statues, became opportunities to document her visit, or to be artistic, or simply to pass the time.

But the bonus is that she was able to nab some pretty good shots while we weren’t looking ― of an interesting bit of architecture at the Trevi fountain in Rome, of a lovely vista from high above Capri.

She wound up taking nearly 800 photos (more than I shot), including several that will make it into an album.

Food in Italy can be amazing .... and expensive, thanks to an unfavorable exchange rate. But there are simple ways you can keep your kids’ bellies full without breaking the bank.

Most hotels in Italy offer free breakfast, so take advantage and make sure your children fill up on pastries, fruits, eggs, meats and cheeses.

Near the biggest tourist attractions, snacks and drinks are (predictably) way overpriced. A vendor near the Colosseum in Rome wanted 4 euro (nearly $6) for a can of Coke.

So here’s a tip: Scout out a grocery store, then, on your way out every morning, pick up a sackful of snacks and drinks (you can fill one for $10 or $15). Trips to Italian grocery stores were as fascinating to Joie as a trip to the Roman Forum was for us ― although they carry Pepsis and Kit Kats, they also sell all kinds of goodies not found in the U.S.

If you can, ask a local to point you to a salumeria (cured meat shop) at midday; these places can make cheap but tasty sandwiches to eat on the go.

The more you save during the day, the more you can splurge at night. Just be aware that most restaurants close after lunch and don’t reopen until 7:30 p.m.

One warning: If there’s a toilet near you, and it’s free, have your children use it.

On the way to Capri, we made the mistake of not using the facilities on the train from Rome before arriving in Naples. At the Napoli Centrale railway station, it costs 1 euro per person to go to the restroom. On the return trip to Rome, same thing: We forgot to go before arriving at Roma Termini and wound up spending another 3 euro just to answer nature’s calls.

On the other hand, sometimes it pays to pay up.

We paid 16 euro each to take a hydrofoil from Molo Beverello port in Naples to Capri instead of 9.60 euro for the regular ferry; this saved us 40 minutes of traveling, reducing the odds of a Joie meltdown.

While on the island, we spent 120 euro on a two-hour private boat tour courtesy of the wonderful Capri Whales di Wendy. We could have spent just 15 euro apiece on a one-hour group tour, but cutting crowds out of the picture can eliminate stress and heighten a child’s sense of wonder. The boat was roomy, the pace leisurely. For Joie, it was the highlight of the entire trip.

Planning is critical. Planning helped us figure out, for instance, that the Vatican Museum is less crowded around 10:30 a.m. on a Wednesday, when the biggest throngs are next door at St. Peter’s Basilica for the weekly papal audience.

Planning led us to use TripAAdvisor.com beforehand to book a highly rated bed & breakfast (Aiano) with majestic views of the Tyrrhenian Sea.

But a healthy dose of flexibility will keep you and your kids sane.

Talk to children ahead of time about how plans can change ― depending on how long it takes to get through a museum, to walk to a certain spot, or to eat a particular meal.

And be flexible yourselves. Kids’ feet can start to hurt; their tolerance for one attraction might be less than it is for another. A game or a book may help, but sometimes, you may need to cut visits slightly short (or extend others if they fall in love with a place ― it was hard to tear Joie away from the wide-open spaces at Villa Borghese gardens, a massive public park in Rome).

There are gelaterias everywhere (our favorite: Old Bridge, near the Vatican Museum). I hate to condone bribery, but there are few better ways to compel a child to behave than the promise of ice cream.