[ The Korea Herald – Send E-mail ]
Salina: Simple beauty in Italy’s Aeolian Islands
By 김후란
Published : May 6, 2011 - 18:38
Updated : May 6, 2011 - 18:38
SALINA ISLAND, Italy (AP) ― As I watch the sun set from my terrace on the west coast of Salina, one of Italy’s Aeolian Islands, I marvel again that the stone headrest I am lying against is so inexplicably comfortable.

Its effect is like so much else on this harsh volcanic island, located in the clearest Mediterranean waters: Salina’s very starkness soothingly lulls you into contemplating its simple beauty.

Vacationers ― including celebs like Leonardo DiCaprio, Naomi Campbell, and even the designer duo Dolce and Gabbana ― flock to the islands in this archipelago off the northeastern shore of Sicily, named after the Greek god of wind and inhabited for millennia. Salina also has its share of famous visitors, especially since scenes from the Oscar-winning ``Il Postino’’ were filmed on one of its beaches, and you could spend an afternoon here cafe-hopping in one of its ports, or splurge on a stay at a smattering of luxury hotels. But there are plenty of places to escape the crowds and take in its idyllic side, as a low-key haven of reddish volcanic rock speckled with palms, olive and lemon trees, and fuchsia clumps of bougainvillea. 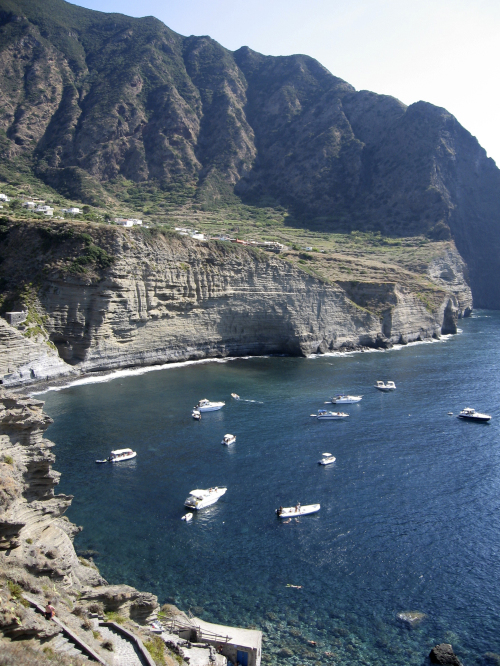 The coastline of Pollara, a hamlet on Salina island, Aeolian Islands, Italy. (AP-Yonhap News)
I spent five days last summer at a caper farm in Pollara, a hamlet of less than 100 people in the half-sunken crater of a tall volcano that turns pink at dusk and pitch-black at night, unmarred by street lights.

It made perfect sense here to pass an evening listening to a gecko’s jaws methodically clamping on its moth snacks, in such utter stillness that the sudden sound of two teenagers laughing down the street lit up the windows of several sleepy households.

Farm owner Giuseppe Famularo took me around the caper fields he inherited when he was 12 from his father, one of the few islanders who didn’t emigrate to the Americas or Australia after a bug destroyed the island’s crops.

As he told me how his family and half a dozen others started over with the local Nocellara variety of caper, I was struck by how much the resilient, labor-intensive plant is a stand-in for life on this island.

The sweet, compact caper is the early blossom of a bush that rises a foot off the ground before spreading its branches out like fountain splashes under the relentless sun ― typically it doesn’t rain a drop here from May through August.

Throughout that time, each minuscule caper must be picked by hand every eight days, avoiding the painful thorn that grows right underneath it, for a total of nearly 4,085 kilograms each season. The capers then ferment under sea salt for at least two months before becoming the staple of the island’s cuisine and a slow-food certified delicacy, used in Famularo’s unique “pesto di capperi di Salina.”

“This is work of the soil, and you need to love it,” said Anna Alizzo, who started picking capers on Salina as a child and whose personal record is 35 kilograms in one back-breaking morning on Famularo’s farm.

“Nobody wants to work in this field, but it’s still enough for local young people to stay,” said Famularo, in his 30s and with a young daughter.

The only other major crop on the island is Malvasia grapes, which produce the eponymous dessert wine whose powerful, honeyed taste reflects its origin: Hand-picked from volcanic slopes, the grapes are sun-dried over reed gratings for nearly a month, said Gaetano Marchetta.

“It is our choice to produce it with very traditional methods,” even though that means only getting some 2,500 liters a year, Marchetta said. He inherited the winery, Azienda Agricola Marchetta, in the village of Malfa four miles from Pollara, from his uncle, who tended it for 50 years.

The most ancient tradition of Salina is fishing, especially tuna and swordfish, so I trusted a fisherman born and raised in Malfa, Antonello “il pescatore” Randazzo, to take me on day-trips to three other islands with a dozen other vacationers.

One day we traveled west about an hour to Filicudi and tiny Alicudi, the wildest and least developed Aeolian islands, their bare cliffs showing all the violence of volcanic eruptions.

Cubic white houses, flat-roofed to gather rainwater and connected via steep stairways, plus a few stone walls dating from B.C. 1,800, dot the islands. If you stay in Alicudi, your valet is going to be Otto or one of his colleagues ― sturdy donkeys that enjoy midday siestas in the little shade among the prickly pears and purple rocks.

Another day we headed east to Stromboli, an active volcano reliably spewing incandescent rocks every 10 minutes or so that looks perfectly conical, as if a child had drawn it.

On the boat, Antonello served his signature pasta with fresh-caught tuna, tomatoes and, of course, capers. In typical island understatement, when a tourist asked him the name of the dish, which would not have been out of place on a Michelin-starred tablecloth, Antonello looked puzzled and said, “pasta al sugo,” generic pasta with sauce.

As the moon rose and the breeze carried the scent of sun-baked wild fennel out to sea, we spent a rapturous hour floating in front of Sciara del Fuoco, the slope where lava and black rocks can be seen bursting out of Stromboli and falling back to the sea.

Sailing back, we passed just north of Panarea, the Aeolians’ celebrity-packed party island, a reminder of how close all-night foam parties are to the haven at Pollara.

On both days, I lost count of how many times I jumped off the boat into water so clear that swimming felt like flying, the sun streaking the sea floor green, cobalt and turquoise.

Another day, a couple of friends and I rented a small dinghy, named “feluca fishing,” and took it around Salina. Anchored just east of the diminutive port of Rinella, the sea was so transparent that it looked colorless above the rocky floor. Away from the coast, the water turned lapis lazuli-blue, so deep that it was impossible to see the bottom.

Lying in the sun as the boat sailed back toward Malfa, I marveled at how precisely the sprays its prow splashed onto the sea resembled fireworks. It was the typical kind of thought that Salina provokes, its stark stillness calling for precise observation of just how beautiful it all is.

One late afternoon, I hung out on Antonello’s boat anchored in sight of Strombolicchio, a 50-meter basalt spire emerging from the sea that would make a perfect home for the most evil James Bond villain.

Antonello and I chatted about the fishermen’s life. It’s a hard life, disdained by the younger generation, but once it’s in your blood, he said, you can never consider leaving the island. I asked why. The gruff fisherman paused.

“It’s paradise,” he finally said, shrugging. “You wake up, you see the sun rise, you see it set. You feel the wind, the sea. Paradise.”