“Nobody cooks a bird like this these days,” said chef Malkhaz Maisashvili, raising his carving knife to sweep slices of chicken into a pot. “I discovered the recipe in a small village.”

Keen to assert itself as an attractive destination for culinary tourists, ex-Soviet Georgia is rediscovering some of the ancient traditions of its unique cuisine.

On a country-wide gastronomic expedition, Maisashvili visited remote regions of Georgia in search of little-known recipes that had only managed to survive in isolated mountain villages.

The chef said that the “banalisation of gastronomy” during the Soviet era and the consequences of globalisation were to blame for the loss of a culinary heritage that he is now trying to revive.

“Some traditional agricultural crops were supplanted by more profitable foreign ones. This led to the disappearance of a number of dishes,” he said.

During the expedition, Maisashvili documented some 150 recipes and since March, most of them have been added to the menu at his restaurant, Puris Sakhli in Tbilisi, attracting “hordes” of diners including foreign tourists as well as Georgians. 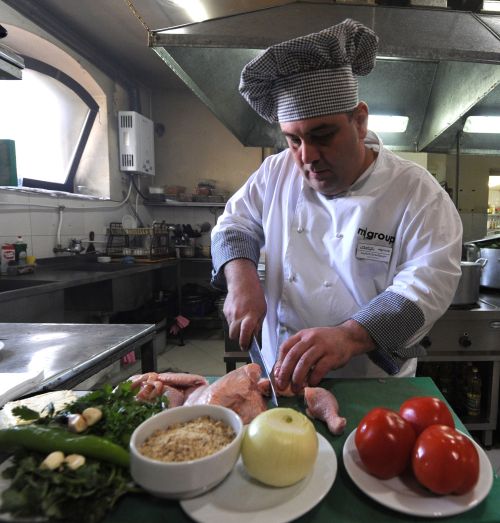 Group restaurant chain cook Malkhaz Maisashvili prepares peasant food at a restaurant in Tbilisi. (AFP-Yonhap News)
Success was ensured by the use of authentic organic products brought in from the provinces in which the dishes originated, he said.

In the mountain town of Keda which is famous for its fine dairy products, Maya Sirabidze, one of the locals who helped Maisashvili with his investigation, said that he could not have reproduced her grandmother’s recipes without authentic ingredients.

“It is impossible to make, for example, a proper ‘sinori’ (baked noodles with cheese and cream sauce) using products from an urban supermarket,” she said.

As she carried the savory bowl of noodles to the dining table at her home in rural Keda, Sirabidze said that it would be a tragedy if ancient recipes were forgotten by future generations.

“What we know from our grannies and mothers should not be lost. Georgia’s culinary memory must be preserved by professionals,” she said.

Georgia was famous among Soviet citizens for its diverse landscape and climate, rich cultural heritage and first-rate cuisine, but for most foreigners during the Communist period, the country was an obscure place somewhere behind the Iron Curtain.

Twenty years after the fall of the Soviet Union, Georgia still feels it suffers from a lack of awareness overseas and that it needs to make all-out efforts to gain a niche in the highly competitive global tourism market.

In recent years the government has stepped up efforts to promote the tourism industry and initiated large-scale infrastructure projects, including the high-profile reconstruction of Georgian towns like Batumi and Sighnaghi.

“We expect these figures to double within the next two years,” said National Tourism Agency chief Maya Sidamonidze.

“We pin particular hopes on culinary tourism, which has huge potential in Georgia.”

Cosmopolitan in its essence, the Georgian culinary tradition has been infused with foreign influences over centuries of invasions and occupations by foreign empires, including Romans, Arabs, Persians, Ottoman Turks and Russians.

But instead of copying others’ traditions, Georgians fused them with indigenous cooking styles.

In his kitchen filled with the heady aroma of the ready-to-be-served “chakhokhbili” ― chicken stewed in tomatoes, fresh herbs and hazelnuts ― Maisashvili said that many foreigners would find “something both native and exotic” in the dish.