The auction house offered 3,600 lots in eight categories in what its Asia CEO Kevin Ching described as the “most successful Hong Kong sale series in its history,” surpassing the HK$3.09 raised at its autumn sale last year.

Hong Kong has become the world’s third largest auction hub after New York and London, thanks to the rising political and economic prowess of China, with mainland millionaires regularly among top bidders.

The record results came despite a disappointing response to a much-anticipated sale of imperial Chinese porcelain on Thursday, with many prized lots unsold.

The sale of the Meiyintang Collection ― 77 pieces of porcelain collected over half a century by a European collector ― had been expected to be the highlight of the week. 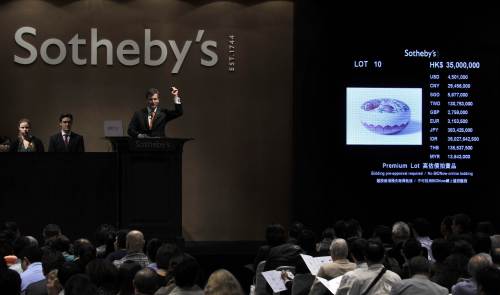 An auctioneer closes the bidding on a Famille rose (fencai) peach box and cover, from the Jingdezhen imperial kilns, Jiangxi province, Qing Dynasty AD1736-95, at the Sotherby’s auction, “The Meiyintang Collection,” in Hong Kong on April 7. The piece, auctioned from a private collection of Imperial Chinese porcelain, sold for HK$35 million ($4, 501, 000). It had been estimated to be sold at HK$40-60 million ($5.1-7.7 million). (AFP)
Pre-sale estimates were between HK$710 million and HK$1.07 billion ($91-137 million) but the collection fetched about HK$399 million when the hammer fell.

The priciest item on offer among the Chinese ceramics was a Qing dynasty Falangcai vase decorated with golden pheasants dating back to the 18th century.

It failed to make its reserve of HK$180 million but was later sold privately for HK$200 million.

The second-most expensive lot, a blue-and-white Chenghua palace bowl, likewise went unsold but was then sold privately for HK$90 million.

“While we saw guarded bidding during (Thursday’s) auction of the Meiyintang Collection, the two top lots were sold immediately after the auction, bringing us very close to our pre-sale low estimate,” Ching said.

The marathon auction also set a new record for contemporary Chinese art when a triptych by Zhang Xiaogang was sold to an anonymous bidder for HK$79 million last Sunday, more than double the top estimate.

Forever Lasting Love, painted for an exhibition in 1988, was described in the catalogue as “the first creative pinnacle of Zhang Xiaogang’s illustrious career.”

It was the highlight of a sale of 105 works from the collection of Baron Guy Ullens, a Belgian foodstuffs magnate and longstanding Chinese art collector whose father and uncle were both diplomats at Belgium’s embassy in the country.

Works by several other artists also set records, with Zhang Peili’s “Series ‘X?’ No. 3” going for HK$23 million, more than nine times its top estimate, also to an anonymous buyer.

Chinese art prices have rocketed in recent years, fuelled by the country’s economic boom and its growing numbers of super-rich.