Little by little, baby greens, hearty spinach and kale ― locally grown in hoop houses or greenhouses ― are showing up.

You can buy just about any produce year-round, but something changes when spring finally arrives. Cooks crave these delicate green harbingers because they require so little fuss. They’re simple and flavorful, and avid farm market shoppers are eagerly snatching them up.

“There has been a lot of excitement at the market to see the green stuff,” agreed grower and market vendor Anthony Cinzori of the certified organic Cinzori farm in Ceresco, Michigan, near Battle Creek. 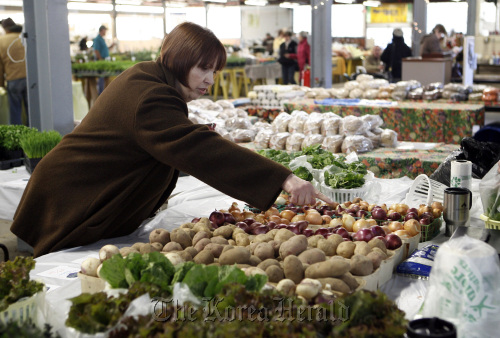 The Cinzoris said their spring greens, grown in hoop houses, have been in high demand.

“People are excited to get something fresh and green and locally grown,” said Anthony Cinzori.

One caveat this year, said Don Cinzori, is that the long, hard, dark winter made the crops slow to get going.

Things should be speeding up.

“We’ve had a nice week, and just getting the sun in the hoop houses really gets things growing,” said Anthony Cinzori.

Ann Malzberg, 68, of Southfield, Michigan, is a true in-season shopper. As soon as spring arrives, she’s off to the farmers market more often. The early greens are a bright spot for Malzberg, and she can’t wait for asparagus to start rolling in.

Recently, Malzberg has been buying spinach, arugula and lettuces at the Royal Oak Farmers Market.

“We have salad every night, and these lettuces are just fresher,” she said. “They haven’t been moved around as much.”

Some markets now have Swiss chard, kale and red and green leaf lettuces. In the next few weeks, look for bok choy, tiny red beets and more types of greens.

But for many, there’s no better sign of spring than the first spears of asparagus. Look for them late next month.