Sheen used a talk show-style format at his Chicago show, with a master of ceremonies asking the actor questions. The interviewer, who didn’t identify himself, kept Sheen on track and gave the actor a chance to make some snarky comments.

Some audience members said the second performance on Sheen’s “My Violent Torpedo of Truth/Defeat is Not an Option” tour wasn’t outstanding, but at least it had amusing moments. And Sheen drew cheers throughout the show, which began and ended with a standing ovation.

During the show at the historic 3,600-seat Chicago Theatre, Sheen smoked cigarettes and answered questions about his marriages, his career and his life with the women he calls his “goddesses.” 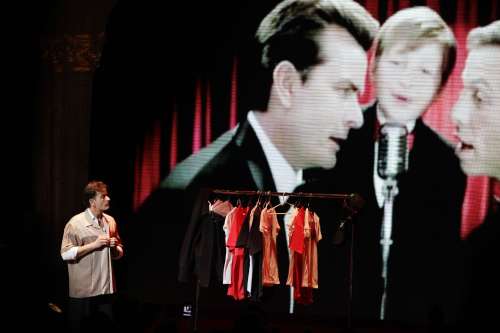 Actor Charlie Sheen looks toward a projection image of “Two and a Half Men” during his performance at the Fox Theatre in Detroit, Saturday. (AP-Yonhap News)
Sheen also had some snappy comebacks for the emcee.

Asked how many times he had been married, Sheen retorted, “Seven-thousand. That’s why I’m broke.”

Asked why he’s “paid for sex” in the past, Sheen responded, “Because I had millions to blow. I ran out of things to buy.”

Sheen also seemed to have a better rapport with the Chicago crowd. As the show began, some in the crowd began chanting “Detroit sucks.” When one audience member asked Sheen to take off his shirt, he swapped his T-shirt for a collared shirt thrown at him by a larger man in the audience. He proceeded to wear the too big shirt for the rest of the show and referred throughout the show to the man who had given it to him.

Early on, Sheen urged the audience in an obscenity-laced statement “not to become (expletive) Detroit tonight. Let’s show Detroit how it’s (expletive) done.” Later when Sheen was asked by the interviewer when he had started “winning,” Sheen responded, “The winning started in (expletive) Chicago.”

Ellen Olson, who was wearing a black T-shirt with Sheen’s catchphrase “Winning!” in white across the front, said she enjoyed the performance.

“I think he interacted with the audience a lot, which made it more funny,” said Olson, 55, of Elmwood Park.

Before the show, audience members said they had low expectations based on what they heard and read about the inaugural performance.

“We figured we’d try it out and see what happens, and if it’s bad, we’ll leave,” said Katie Iglehart, 23, of Chicago, who was attending the show with a friend.

Like the Chicago show, Sheen’s Detroit performance began with thunderous applause. But it soon disintegrated before ending 70 minutes later. In between, Sheen tried to appease his audience with rants, a rapper and a question and answer session, ultimately concluding the first show was “an experiment.”