[ The Korea Herald – Send E-mail ]
Disaster images of Japan lend visual power
By 김후란
Published : Mar 21, 2011 - 17:58
Updated : Mar 21, 2011 - 17:58
NEW YORK (AP) ― Sometimes it’s a fast-moving ooze: A street becomes a stream, grows into a river and then a raging mountain of moving debris. Sometimes, it’s a wet curtain of water crashing over a shoreline, tossing trees, ships and cars casually aside as a child would a stack of Legos.

Until a week ago, a tsunami was one of the most mysterious of natural events, its devastating power usually evident only in the aftermath. Yet from the first moments the Earth started to shudder on March 11, Japan’s tsunami was one of the most recorded disasters ever to be captured on film, lending a visual power to story-telling unmatched since the Sept. 11 terrorist attacks almost a decade ago.

Quake footage was available almost instantly: Office workers running outside as building chunks slam to the ground; skyscrapers swaying like evergreens in a windstorm; pictures falling off walls; store stock spilling to the floor. One man kept recording as his living room seemed to fall apart around him. His camera caught his shaky steps as he finally rushed outside.

But as dramatic as the earthquake images were, the tsunami video ― some of it live ― was breathtaking. A handful of tourists captured the Indonesian tsunami in 2004, but there was much less variety and inferior film quality. Technology ― particularly cell-phone cameras ― was not what it has become today.

Japan, too, is unique ― a nation that not only produces electronics but also focuses on technology, camera phones, handheld video and digital cameras. And it may also be the most well-wired country for recording such disasters. With its geologic history, seismic monitors and robotic cameras are mounted throughout the archipelago. 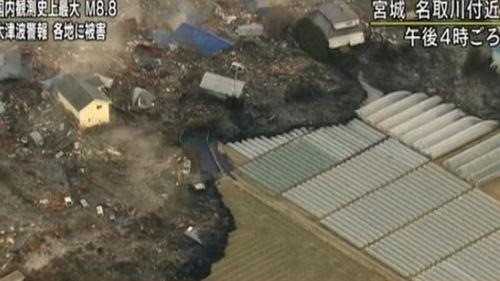 In this video image taken from Japan’s NHK TV, a tsunami surge carrying debris sweeps between houses to reach poly tunnels on farmland near Sendai in Miyagi Prefecture Japan on March 11. (AP-Yonhap News)
Japanese news crews quickly took to the streets and skies after the earthquake, leaving them well-positioned to capture the tsunami.

At times, they were too well-positioned: A video that surfaced late last week showed a local news crew abandoning a car with the tsunami approaching and rushing into a building as water began swirling around their feet.

What, though, do these images do? Do they change how we perceive the event? Do more higher-quality images of catastrophe make it seem more real or more movielike? Will we remember the 2011 Japan tsunami differently than its calamitous predecessors because we saw so much of it so quickly?

“In this case, it certainly captured images that no one expected to see,” she said. The story gave CNN its best ratings since President Barack Obama’s inauguration in 2009, the Nielsen Co. said.

Viewers couldn’t get enough ― even those who were personally touched by it.

“I tried, but couldn’t stop watching,” said Maisararam from Banda Aceh, Indonesia, who lost her husband and three daughters in Indonesia’s 2004 tsunami. “It was exactly the same, except they have this horrible footage, events unfolding right before your eyes.”

One particularly arresting video showed water and debris rapidly rising as a group of people struggled to make it up a path to higher ground; CNN stopped rolling the shot ― the fate of the crew unknown.

In another instance, men who had raced to the top of a parking garage kept recording the tsunami even as one openly wondered whether he would survive or not.

The wealth of visual material stood in contrast to events at the earthquake-damaged Fukushima Dai-ichi nuclear complex where six reactor units have had fires, explosions or partial meltdowns. As the water receded and attention turned to the crippled nuclear plant, the story became one of those events that television is poorly equipped to tell.

Images are elusive. Except for a handful of aerial shots, the drama at the plant has largely been seen in fuzzy video taken from many kilometers away. Occasionally, water is dumped on damaged nuclear reactors from the air, yet it’s so difficult to see that it must be highlighted by editors in the pictures.

Evacuation zones have also led American TV networks to pull many of their teams out of the immediate area for safety reasons over radiation poisoning.

But no one knows what is really happening at the plant, or what will happen, and how much radiation is being exposed to how many people. That leads to less-than-illuminating reports, such as Lester Holt revealing on NBC’s “Today” show that his shoes tested positive for radiation.

Other than lost footwear, what did the incident really teach us?

Television frequently returned to old-fashioned and visually dull habits out of necessity, bringing a succession of experts before cameras to report the nuclear threat.

The uncertain aspects of the story quickly led to on-air debates over whether television was “hyping” the nuclear danger. NBC’s “Nightly News” pointed a finger at the media in a report that minimized any danger to the United States. Fox News Channel’s Shepard Smith labeled “sad and pathetic” Americans who bought anti-radiation pills in large numbers.

Yet his own network showed this headline Friday: “Growing Concern Over Radiation Plume Drifting Over Western United States.”

But radiation is not a television event; it is, for the most part, something you cannot see ― ambiguous, invisible, diffuse.

There was nothing ambiguous about the tsunami footage. In an era of unremitting visuals, it was imagery like none other ― another example, in a time of technological change, of how we can watch the world unfold, even in its saddest, most frightening moments.