The colleges’ reaction was as flat as a glass of beer left out overnight. While they did not believe Taylor would find that much interest in a home-brewing course, he remained confident. Cabrillo College offered to let him try it out, and the first session filled up with 17 students, one short of capacity.

Taylor has offered the course three times a year ever since. The upcoming spring session has already filled up, but aspiring hops handlers can take a private lesson or wait for the summer installment.

Taylor was sure the students would turn out because he still vividly remembers the day he became hooked on home-brewing 12 years ago.

“I was turned on immediately by the whole process,” he said about a one-day class he took at Seven Bridges Cooperative in Santa Cruz, Calif. “I liked the alchemy of it all, taking ingredients and creating something completely different. After the class I bought a starter kit, went home and brewed it and I haven’t stopped since.” 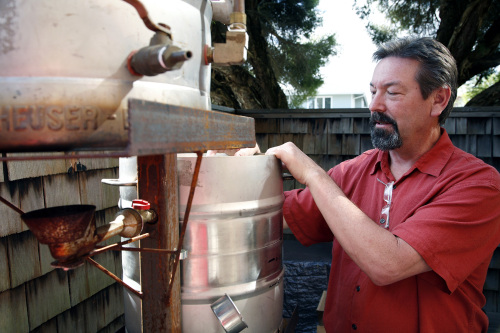 Mark Taylor explains the mechanics of his backyard gravity-fueled beer sculpture at his Capitola, California home. (Santa Cruz Sentinel/MCT)
The timing of Taylor’s decision to start teaching the course was fortuitous, coinciding with a boom in do-it-yourself brewmasters.

Home-brewing has increased in popularity recently, along with the proliferation of craft microbreweries. The American Homebrewers Association says there are 750,000 home-brewers nationwide. The association says its surveys showed a 20 percent increase in home- brewing in the five years from 2004 to 2009.

In Santa Cruz there are two home-brew clubs, the Zymurgeeks, which Taylor is a part of, and the Redwood Coast Brewers Association.

Today, Taylor brews beers from scratch regularly, and has four beers on tap in his converted refrigerator ― adorned with bumper stickers with slogans such as “I brew therefore I am.”

Taylor offers a one-day beer tasting class at Cabrillo where he introduces participants to brews and beer styles from all over the world. He also offers a five-week comprehensive course in home-brewing, and is planning on teaching a one-day home-brewing crash course as well this summer.

He enjoys creating his own recipes, but has no plans to brew commercially.

“At home it’s fun, and you save money if you drink a lot of beer,” he said. “Brewing commercially is work, but teaching is a blast.”

Every winter, Taylor and his wife travel to San Miguel de Allende, Mexico, where he also teaches.

“The home-brewing community down there is like what it was here 20 years ago, but its growing every year.”