[ The Korea Herald – Send E-mail ]
Celebrating genius of an undiscovered photographer
By 김후란
Published : Mar 13, 2011 - 19:05
Updated : Mar 13, 2011 - 19:05
CHICAGO, Illinois (AP) ― Fractions of seconds, captured by Vivian Maier a half-century ago or more ― fleeting moments of life on the streets at a time when men wore fedoras and dragged on Lucky Strike cigarettes, when women favored babushkas, when families piled in Studebakers and Packards for Sunday drives.

She and her photos seemed destined for obscurity until a young man with an eye for bargains stopped by an auction house one day. He paid about $400 for a huge grocery box stuffed with tens of thousands of negatives.

He knew only that they came from a repossessed storage locker that had been rented by an elderly woman.

He carted the negatives home, not expecting much maybe just some illustrations for a history book he was co-authoring about his Northwest Side neighborhood. He didn’t find any.

But he did unearth a far bigger treasure.

John Maloof had stumbled upon an undiscovered artist whose photography is now being compared to the giants, a reclusive woman who, in death, is attracting the kind of attention and acclaim she would have shunned in life.

Maloof, a real estate agent, knew nothing about photography, but when he started scanning some of the negatives in his computer, even a novice could see they were special:

Striking scenes of every crane and every beam as Chicago’s John Hancock skyscraper went up. Captivating cityscapes of the elevated tracks in New York.

Maloof was inspired to shoot his own photos. He wanted to meet Maier, but someone at the auction house said she was ill. And he didn’t press.

Instead, Maloof decided to collect as much of her work as he could find. He contacted folks who had bought Maier’s other possessions at the auction that day in late 2007. Soon, he owned 1,000 rolls of her film. But it would be expensive developing them all. 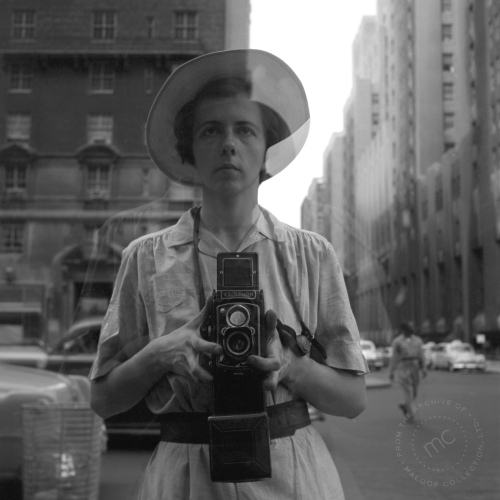 This undated photograph shows an untitled self portrait of Vivian Maier. (AP-Yonhap News)
So Maloof, who sells antique reproduction hardware online, peddled about 100 negatives on eBay to raise cash. Some went for $5. Others for $12. One for $80.

One buyer happened to be Allan Sekula, a prominent photographer, critic and teacher. He offered some advice: Stop selling the negatives. The work was good enough for an exhibition and should not be dispersed.

Maloof set out to learn more about Vivian Maier. His first Google searches had fizzled, but in April 2009, he spotted her name scrawled on the envelope of a roll of developed film. He tried again.

This time, he found an obituary in the Chicago Tribune.

Maloof called the Tribune, but soon ran into some dead ends.

Then a serendipitous moment: As he was filing loose negatives and about to throw out a shoe box that had been stuffed in the larger box, he spotted an address in north suburban Highland Park.

The address led Maloof to Lane and Matthew Gensburg, two of the brothers who had posted the obituary. 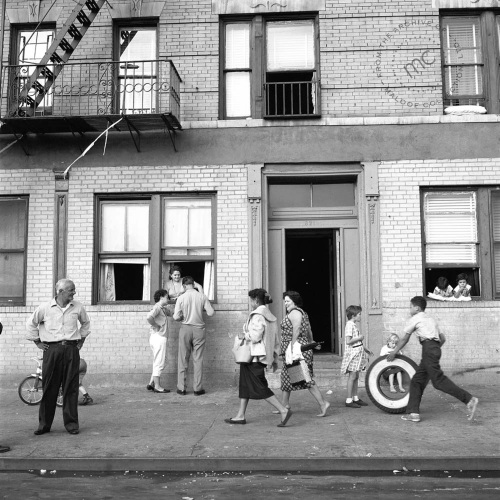 Vivian Maier, it turned out, had two distinct identities: A nanny for the Gensburgs and other families in a 40-year career on Chicago’s affluent North Shore. And before, during and after work, a photographer who chronicled the gritty drama and tender moments of street life in and around Chicago.

Maloof, now 29, and his college-buddy-turned partner, Anthony Rydzon, tracked down families Maier had worked for, hired genealogists and chronicled her path from New York to France to the Chicago area.

She was a Mary Poppins who took her young charges on adventures such as strawberry picking, topped off with an ice cream-making session. A collector of everything from Marshall Field’s bags to railroad spikes. A frugal shopper who told the homeless where to buy bruised fruit for a few cents.

Maier’s photos range from 1949 to the mid-1990s. Mostly, her black-and-white images depict the poor, women (especially well-dressed dowagers) and children. After switching to color in the mid- to late ’70s, she turned to graffiti, inanimate objects and garbage.

Maier also liked to shoot self-portraits, her face seen through a window pane or some other reflection.

So what makes her work special?

“She had an open and inclusive and very fundamental idea of what constituted ‘America’ that was missed by a lot of photographers in the 1950s and 1960s,” says Allan Sekula, the photographer who bought some of her negatives and teaches at the California Institute of the Arts.

“It’s both the variety and a kind of quirky democratic energy of street life,” he says. “She connected herself through the camera to the street in a way that gave her a charmed presence.”

Joel Meyerowitz, a prominent photographer and author, says he first thought Maier’s photos had been shot by a man.

“They’re earthy and gritty and tough,” he says. “She was incredibly bold as a woman and vulnerable at the same time in a period when women weren’t necessarily thought of that way.”

This winter, Maloof finally succeeded in getting a one-woman show for Maier at the Chicago Cultural Center, her U.S. debut. Maier’s photos already have been displayed in Denmark, Norway and Germany and in magazines in England, Poland and Italy, among others.

Maloof is now working with Sekula to assemble a book of her photos. He also has joined his partner, Rydzon, and a Danish filmmaker to produce a documentary, “Finding Vivian Maier.”

He is not, he insists, looking to make money on her legacy. He says he merely wants to bring her photos to the world, and bring credit to an unsung artist.

Would the intensely private Maier approve?

“She wouldn’t like all this attention, but I feel her work deserves recognition, and I think this is a nice thing for her legacy,” Maloof says. “But I’ll never know, of course, what she would think.”.