They’re old, but not in spirit. When talking about their passion for music, the two musicians’ eyes twinkle like stars.

The 69-year-old violinist Kim Min, music director of the Korean Chamber Orchestra, had thought his most recent recital “My Life, My Music” at the Seoul Arts Center in 2008 would be his last stage performance. But he could not reject his old friend’s offer ― to perform the complete cycle of Beethoven’s 10 violin sonatas on stage.

Kim and 64-year-old pianist Lee Dai-uk, professor of piano at Hanyang University, are to hold three concerts at the Kumho Art Hall on March 10, 17 and 24. The concerts are part of Kumho’s “Beautiful Thursday Concert Series.” 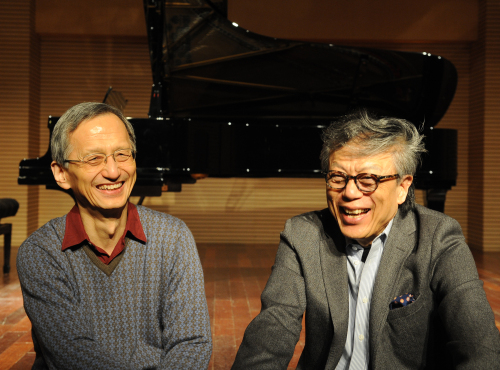 Violinist Kim Min (right) and pianist Lee Dai-uk speak during an interview at the Korean Chamber Orchestra’s office in Seoul on Thursday.  (Lee Sang-sub/The Korea Herald)
“Lee first suggested we do the Beethoven violin sonatas, encouraging me a lot that we can do well together,” Kim told The Korea Herald, after finishing a second rehearsal with Lee at the Korean Chamber Orchestra’s office in southern Seoul.

“I guess we can still play music at this age simply because we like music so much. We cannot help but be enthralled by the intenseness that music always gives us,” he said.

The five-year age gap seemed vast when pianist Lee was just a high school student aspiring to become a classical music star like Kim, who was then a Seoul National University violin major.

But now that they’re both in their 60s, they are almost like friends.

Kim and Lee became close in the early 1970s when Kim was in Germany working as a music director of Koln Chamber Orchestra and Lee was in New York studying at the Julliard School.

In those days, it was very expensive to buy LPs in Germany while those in the U.S. were one third of the price. So, Kim traveled to New York and got Lee’s help to buy a bunch of LPs in New York.

“We used to spend all day choosing albums and it was really fun because I used to buy only one or two LPs after saving my pocket money while Kim bought 100 LPs at a time,” Lee recalled.

Kim returned to Korea in 1979 and was appointed concertmaster of the Korean Philharmonic Orchestra and the KBS Symphony Orchestra, while Lee spent 20 years as a member of the piano and conducting faculty at Michigan State University. Lee received a Fulbright Grant and taught at Seoul National University in 2003, and then founded the LG Chamber Music School in Seoul, serving as its first director, in 2009.

Among the 10 Beethoven violin sonatas they will play, Kim chose No. 9 as his favorite, while Lee chose No. 6.

“Each Beethoven violin sonata has its unique characteristics, just like 10 different children. You can’t really say one child is better than the other, but there is a child you tend to care more for, without a reason,” Kim said.

As longtime educators of classical music, the two also share the view that the Korean classical music scene has made great progress in terms of individual musicians’ global presence.

Lee said that when he was studying in New York, people used to ask him why an Asian person would want to play Western music.

But 30-40 years later, the question has changed.

“They ask why an Asian person like you wouldn’t play music,” Lee said.

However, both Kim and Lee said Korea’s “music infrastructure” is still at an early stage with too few people looking for classical concerts, too many artists worrying about their livelihood and too many students regarding music as something you have to take up at the expense of studying.

“A lot of students I taught in the past used to say they gave up studying because they chose to do a music major. They didn’t realize that to do music is to study,” Lee said.

“Korean students are good at practicing techniques but they tend to lack intellectual curiosity and understanding toward music,” he added.