[ The Korea Herald – Send E-mail ]
Sheen gains Twitter followers, loses kids
By 김후란
Published : Mar 4, 2011 - 10:48
Updated : Mar 4, 2011 - 10:48
LOS ANGELES (AP) ― When Charlie Sheen threatened and maligned his bosses over “Two and a Half Men,” it was business and, to some people at least, bizarrely comic. When his estranged wife alleged that she and their twin toddlers were in peril from the TV star, the saga turned ugly.

Sheen’s 23-month-old sons were removed from his home Tuesday night after Brooke Mueller Sheen claimed that he threatened her with decapitation, adding a nasty custody battle to the actor’s bitter war with the studio and producers who shut down his hit CBS show.

Her claims followed days of sometimes manic, sometimes violence-tinged media interviews by Sheen, part of a public campaign to disprove that he is a drug-using, reckless playboy who was unable or unfit to work on this season’s final episodes of TV’s No. 1 comedy.

Sheen’s grandstanding has fascinated the public, with his Twitter account drawing close to 1 million followers a day after it was created. But Mueller Sheen said in a claim seeking a restraining order filed Tuesday that his “bizarre, disturbing and violent” comments made her fear for the safety of their children because Sheen “does not appear mentally stable.”

According to Mueller Sheen’s filing, Charlie Sheen has rarely seen the boys in the past year, but took them Saturday and refused to return them.

According to a sworn declaration filed in the case, she said her husband told her in a phone call Sunday night, “I will cut your head off, put it in a box and send it to your mom!” She also claimed earlier threats and physical abuse.

A court order issued Tuesday and obtained by the Associated Press requires Sheen to stay 100 yards (meters) away from Mueller Sheen and their twin sons. Sheen has two other children with former wife Denise Richards.

The twins, Max and Bob, were taken from Sheen’s Hollywood Hills home that night and returned to their mother’s care. The boys turn 2 on March 14. 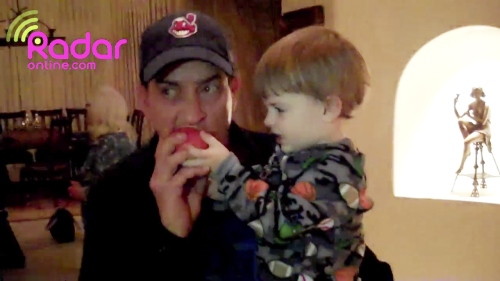 In this image from video released by RadarOnline.com, Charlie Sheen takes a bite from an apple while holding one of his 23-month-old twins before they were removed from his Hollywood Hills home late Tuesday. (AP-Yonhap News)

A Los Angeles Police Department statement that its officers had removed the boys was incorrect, police Officer Bruce Borihanh said Wednesday. The department was not involved and he did not know which agency might have been responsible, he said.

Mueller Sheen’s attorneys did not immediately respond Wednesday to a query about the event.

Earlier, on NBC’s “Today” show, Sheen said he was “very calm and focused” about having the children taken away but was ready to fight to get them back.

Moments later, Sheen was asked by reporters outside his home whether the legal move came out of left field for him.

“It came out of the bleachers, actually,” he said. “Yeah, I was told a restraining order was being delivered and I thought, ‘OK, I can deal with that.’ And it was revealed that it was something much more serious.”

Asked why Mueller got the court order, he replied, “It’s just silly. I think she’s latching on to some of this recent press.”

In interviews filled with strange comments such as “I got tiger blood, man,” Sheen has lobbed vitriol at “Men” executive producer Chuck Lorre and Warner Bros. Television while sharing details about his unusual home life and insisting he was “winning.” He’s demanding a big raise from his $1.8 million-an-episode pay ― already among the highest in television.