And for those without the time or energy for all that chopping and simmering, the canned soup aisle offers an array of effortless options. But are they delicious?

We plucked five veggie soup brands from supermarket shelves and put them to a blind test. Nine tasters rated the soups on look, aroma, texture and, of course, cozy deliciousness.

All of the soups are tomato-based, with carrots, peas, potatoes and celery among the main ingredients. All claimed not to have any added MSG, though there is a small amount of glutamate occurring naturally in yeast extract. All had similar calorie and fat content ― they ranged from 80 to 100 calories and 0 to 1.5 grams of fat per 1-cup serving. Sodium levels varied. 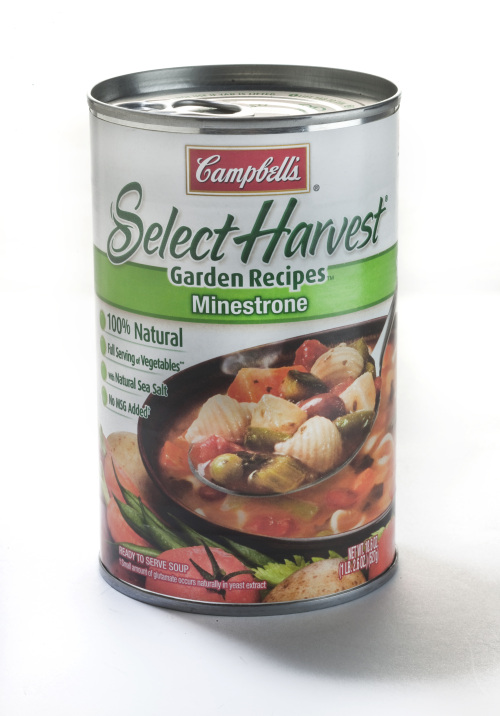 The winning Campbell’s soup, a chunky affair that includes pasta shells, kidney beans,green beans and zucchini, also counted parmesan, cheddar and chicken stock among its ingredients. (Chicago Tribune/MCT)
The tasters arrived on a bone-achingly cold day excited to fill their bellies with comfort food ― but from their groans and grimaces, it became quickly apparent that these soups aren’t so mmm, mmm good.

On a scale of 1 to 9, the highest rated soup turned out to be Campbell’s Select Harvest Minestrone, which pulled in an average score of 5.4. It was followed by Healthy Choice Country Vegetable (4.5) and Homestyle Minestrone (4).

To be fair, the Amy’s soup was “light in sodium,” meaning that its 290 milligrams of sodium per serving is half the salt content in Amy’s regular minestrone soup and less than any of the other soups tasted. Comments denounced the thin broth, mushy vegetables and tastelessness of the soup, calling it “almost offensive,” “like some malevolent machine sucked the flavor out of it.”

Still, high sodium content didn’t directly correlate with a better soup. The two highest scorers each contained 480 milligrams of sodium per serving, compared with 690 milligrams in the third-place Homestyle and 660 milligrams in fourth-place Progresso.

The winning Campbell’s soup, a chunky affair that includes pasta shells, kidney beans, green beans and zucchini, also counted Parmesan and cheddar cheeses and chicken stock among its ingredients. So maybe therein lies the secret to snagging the ringing endorsement that one taster summed up as: “Decent enough.”