The “Secrets of the Silk Road” exhibit reopened Friday at the University of Pennsylvania Museum of Archaeology and Anthropology with a pair of show-stopping ancient mummies, now that a mysterious dispute with the Chinese government has been wrapped up.

The drama has passed that had museum officials fearing their biggest exhibit in decades was doomed. But if you want your mummy, there’s not much time. They’ll be on display only until March 15, and the remaining artifacts will be on view until March 28. The full exhibit was initially slated to run until June 5; the hastened departure has not been explained.

“It’s kind of a wonder that it has actually come to pass,” said Victor Mair, a Penn professor of Chinese language and literature who has led expeditions in China for more than 20 years and helped develop the exhibit. “It is extraordinary to have so many important pieces all in one place.” 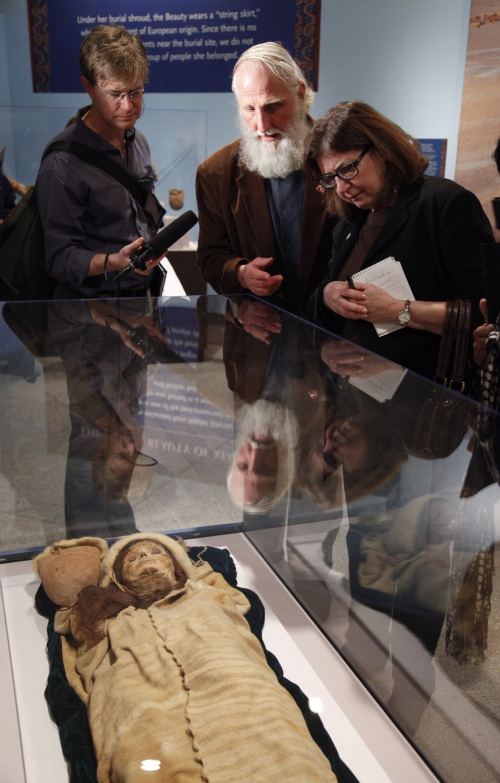 The mummies have Caucasian features, proof that western populations migrated eastward along the Silk Road, the vast web of trade routes connecting China, India, Central Asia, the Middle East, and parts of Africa and Europe. One, dubbed the Beauty of Xaiohe, has a head covering that looks remarkably similar to an alpine-style felt hat with a long feather, and the blanket wrappings on a 9-month-old baby mummy are similar to burial shrouds discovered in northern Europe.

Because the mummies have not undergone DNA testing, specifics of their heritage remain unknown, Mair said.

The show had traveled without issue to the Bowers Museum in Santa Ana, California, and the Houston Museum of Natural Science but the Penn Museum was told just days before the Feb. 5 opening to remove the artifacts.

Officials have kept mum on specifics of the tiff, which forced the museum to refund thousands of tickets and left curators scrambling to create dummy mummies and faux artifacts for the empty display cases.

Officials at the Chinese embassy in Washington said the mix-up was the result of “miscommunication.”

Lin Ruihua, an embassy official who traveled to Philadelphia for the exhibit’s opening, acknowledged that the opening “is obviously a moment that did not come by easily” but credited the positive outcome on Mair’s impassioned visit to the embassy when trouble first arose.

“I was so touched by his dedication and sincerity,” Lin said.

For the next month, the show’s marvelous mummy stars will be front-and-center: the stunningly preserved Beauty of Xaiohe, a 3,800-year-old female with long, wavy auburn hair and eyelashes, and the baby, still clad in a blue bonnet and bundled in a burgundy blanket 2,800 years after his death.

Speaking in his native tongue for the large contingent of Chinese media in attendance, and joined by an English interpreter, Guo Jianguo of the Xinjiang Bureau of Cultural Relics said he hoped “Secrets of the Silk Road” would serve as a starting point for future cultural exchanges between the U.S. and China.

The museum had made the mummy-less exhibit free with museum admission. Now that the mummies are back, so are timed ticket sales and extended hours. The museum will be open seven days a week, closing at 6 p.m. Mondays, Tuesdays and Thursdays, and 9 p.m. on the other four days.

The show “allows us to look at the history of our globe in a totally new way,” museum director Richard Hodges said.

Also returned to the exhibit are about 130 artifacts, including textiles, clothing, pottery, masks - even an ancient egg roll and wonton ― discovered in the Tarim Basin, an immense desert in the autonomous Xinjiang Uyghur region of China. The dry and salty conditions created an ideal environment for the bodies to mummify naturally.

A third mummy, the 1.98-meter “Yingpan Man,” was deemed too fragile to travel. His gold-foil mask and elaborate robes, which are on display, also suggest European influences.

After the artifacts take their early leave at the end of March, the museum said it will mount an “interactive experience with pictorial depictions of objects” ― again free with admission ― from April 2 until June 5. Museum officials did not elaborate on why the artifacts were not staying at the museum through the exhibit’s scheduled run.