[ The Korea Herald – Send E-mail ]
‘Grow’ fresh air in office and home
By Park Min-young
Published : Jan 19, 2011 - 19:00
Updated : Jan 19, 2011 - 19:00
Sitting in a stuffy office, you can start to lose concentration as the day drags on into the afternoon. The regular afternoon headache approaches, accompanied by that stifling feeling in rooms where the heater is turned on way too high. Things get worse if the air is tainted with streaks of cigarette smoke.

Many people who spend a lot of time indoors suffer from severe headaches in the winter. Often it is because of poor air quality as windows are kept tightly closed and you eventually breathe in fumes that emanate from furniture and electronic gadgets.

Korea’s Indoor Air Quality Information Center recommends that indoor environments be maintained at 18 to 22 degrees Celsius and at least 40 to 50 percent humidity in all seasons to be pleasant. In the winter, however, most offices and homes are too hot and dry due to over heating and lack of ventilation.

“We spend more than 90 percent of the day indoors and breathe in about 20 to 30 kg of indoor air. The air inside can be more dangerous to health than the air outdoors,” said Kim Gwang-jin, researcher at the National Institute of Horticultural and Herbal Science.

In such a suffocating atmosphere, adding house plants can help. Plants serve as natural humidifiers and air cleaners, on top of brightening up your surroundings.

Kim Jung-won, a 50-year-old housewife, bought many plants to put in her home as soon as she returned to Korea last October after living in Canada for four years.

“Ever since we came back, my son suffered from allergies and coughed a lot. I thought it must be because the air is more polluted here so I bought an electronic air cleaner and many house plants to put in his room. I also figured that it would be good for a student to see lots of green anyway. The plants brighten up his room and he seems to feel more at home,” said Kim.

“I like having the plants in my room because it feels like I’m in a forest,” said Park Jun-beom, Kim’s 12-year-old son.

The greener it is and the more leaves and rootlets it has, the more capable a plant is of purifying the air. At least one plant per 3.3 square meters is recommended to keep the room pleasant. Growing air-purifying plants is not difficult ― even first-timers can easily do it because the plants are mostly resistant to diseases and damage by insects.

One thing to keep in mind, however, is that plants should not be placed just anywhere. They belong in particular places in the house and office that provide the right environment for them to grow and that maximize their different capabilities so we can enjoy their benefits. Here are some suggestions.

Pothos (scientific name: Scindapsus) and Peace Lily (Spathiphyllum) are suitable for the kitchen because they get rid of bad odor as well as purify and humidify the air. 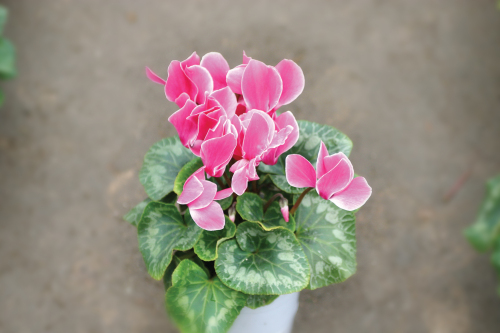 Cyclamen
Among plants, Pothos has the highest removal rate for carbon monoxide in the air, about five times higher compared to regular plants. Carbon monoxide is easily generated through cooking using gas stoves. The plant is a good decoration to the kitchen as well because it has drooping leaves and can grow in the water or be hung up on walls. 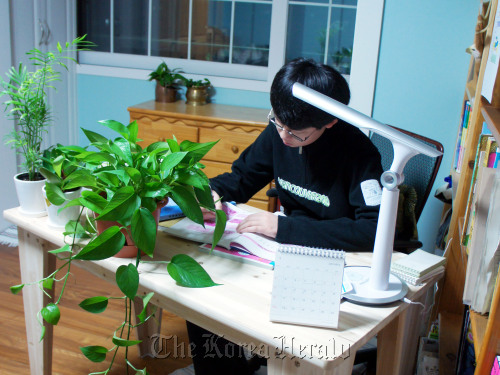 A student studies in a room furnished with Pothos and other air-purifying plants. (Park Min-young/ The Korea Herald)
Peace Lily also absorbs carbon monoxide, gets rid of bad smells and generates a large amount of anion which is known to help reduce stress and increase the ability to concentrate. It can also be grown in water and is among the few air-purifying plants that grow flowers.

In the bathroom, plants that absorb ammonia are useful, like Lady Palm (Rhapis flabelliformis), Anthurium (Anthurium andraeanum) or Pachira (Pachira).

Areca Palm (Chrysalidocarpus lutescens) ranks first place in NASA’s 10 air-purifying plants list. Dubbed “the most effective air humidifier,” it emits about one liter of water per day if it is at least 1.8 meters tall. It is great not only for the living room but for anywhere indoors that needs extra humidity. It also significantly removes formaldehyde which is emitted by new houses, furniture, vinyl and cigarette smoke.

Because the living room is more exposed to dust and toxins carried in from outdoors, it is an ideal place for a Rubber plant (Ficus elastica) or a Benjamin Tree (Ficus benjamina). The plants provide humidity and eliminate volatile organic compounds. Even when the plants take up only about two to three percent of the room, the amount of dust is known to decrease by 20 percent.

In the bedroom, plants that produce oxygen instead of carbon dioxide in the nighttime, such as moth orchid (Phalaenopsis), Red-edge Peperomia (Peperomia clusiifolia), cactuses and other succulent plants, are ideal.

English Ivy (Hedera helix) is a popular gift for those who move into a new house or office because it removes formaldehyde in the air. It also produces anion and helps relieve allergies. In experiments, 60 percent of indoor mold vanished within six hours of the plant being introduced to a room. 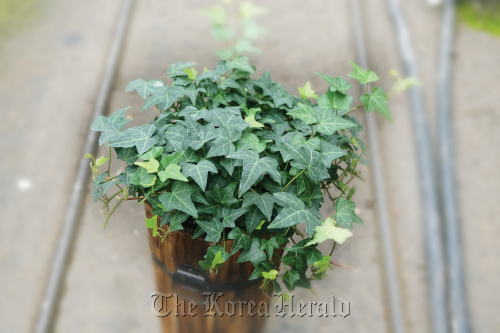 Other plants that efficiently reduce the amount of formaldehyde in the air include Boston Fern (Nephrolepis), which has the highest removal rate for the toxin in the air according to NASA, Pothos, Peace Lily, Syngonium (Syngonium podophyllum) and Philodendron (Philodendron). 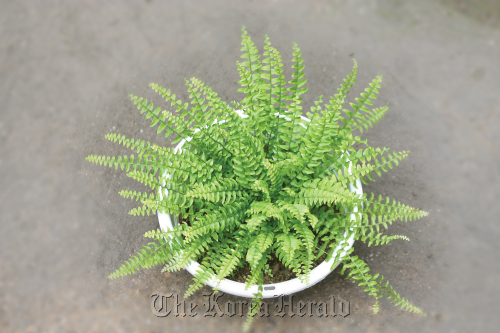 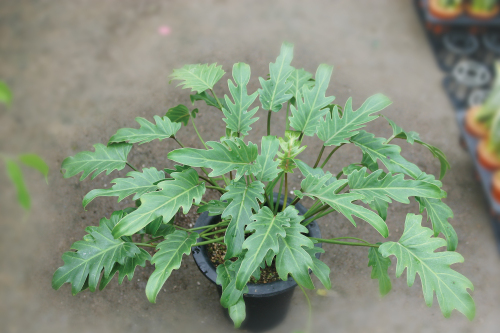