Many women hesitate when ushered into a room with floor-seating instead of to a table when having dinner at a Korean restaurant, especially in the winter.

Sure, it could be because they are wearing skirts that are too short or boots that are too much trouble to take off and put back on. But frankly speaking, those might not be the only reasons.

“I never say it out loud, but I am worried that my feet might smell or my toes might have bored holes into the stockings. Especially when I have been wearing boots all day long, because I don’t know what might have happened inside them,” said a 25-year-old office worker who asked to remain anonymous.

Women accuse men of having smelly feet all year long. But during the cold season, well, it is possible that they are the smellier ones.

According to a 2009 survey by Novartis Korea of 1,000 men and women aged 18 to 54 who live in Korea’s four metropolitan cities, 51.5 percent of the women said that they have experienced foot fungus in the winter.

Not a surprise, knowing how they fussily pamper their precious feet in the summer but often completely forget about them as soon as they disappear from sight, tucked deep inside a pair of boots.

For all who feel guilty, here are some basic steps to make your feet soft and odorless again. 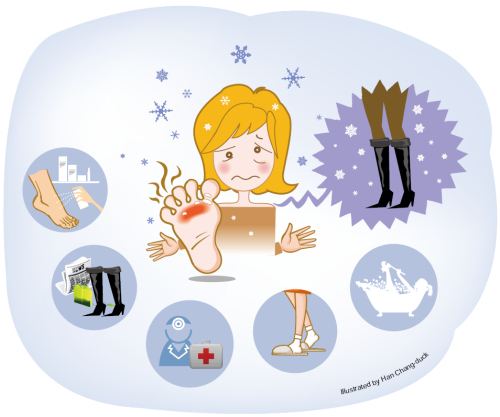 One, wash them smartly

Your feet could easily get sweaty and callused in the winter because they are stuck inside extra warm shoes for most of the day. Such shoes, including boots, are most likely made of non-breathable materials that trap heat and moisture which can cause calluses that lead to dermatitis like athlete’s foot and bad odor.

Some recklessly try to scrape the calluses off with something sharp, like a knife or a paper cutter. This can be even more dangerous than it sounds because doing so could cut off some of the healthy skin and infect that too.

The smart way to remove calluses is to soak your feet in warm water for a while, rub them with a soft towel or brush, wash them with soap and dry them completely. If water remains on the feet, it could be another cause for bad odor.

“It is okay to use foot exfoliating tools or cream if the calluses are too thick, but you should avoid using too much force to scrape them off especially when your feet are wet. Not everyone needs to get rid of calluses and excessive exfoliation could irritate the skin even more,” said Park Ji-young, dermatologist at ArumdaunNara Dermatology Cosmetic Surgical Center.

Two, give them extra care

After cleansing your feet thoroughly, slather on foot lotion or cream that contains callus softeners. Doctors say that moisturizers are always good for the feet. If your feet still feel too dry and chapped, cover them up with plastic wrap or gauze for the night and you will find them much softer in the morning.

If time and money permits, visiting a nearby foot massage center or a pedicure shop would be refreshing. Your feet deserve a full-course treatment from scrubs and massages to shiny pedicures from time to time, even in the winter.

If you think you have a fungal infection, make sure you see a podiatrist. Young women are often too ashamed to admit that they have foot problems and refuse to go see a doctor. But doctors warn that it may bring on secondary infections or other serious complications if not treated soon enough.

“Athlete’s foot sometimes gets naturally cured when the season changes, but that is only if the condition is not too bad. In worse conditions, the germs can move on to fingernails and toenails. Then the treatment gets more complicated and it can spread to other people as well,” said Park.

“High humidity is a major cause of athlete’s foot. Winter is a better season to treat the problem than summer because it is relatively drier. But even if you get cured for now it does not mean that you are cured for good. It requires continuous care.”

Three, watch out for boots

As warm as they are, tall and tight boots impede blood circulation and provide a perfect playground for bacteria to breed. Calluses, corns and modified toenails may even follow as well, if the boots come with killer heels.

Uggs, which have been highly popular among women for several years now, are loose and comfy but also provide a perfect germ-breeding environment. So those who prefer to have nothing between them and their sheep-skin boots so that they can best enjoy the cushiony wool lining should know that it is not such a good idea.

“When wearing boots barefoot, the sweat will remain inside and increase the possibility of developing athlete’s foot. It is much better to wear cotton socks that can absorb sweat instead of wearing stockings or going barefoot,” said Park. Insoles that have moisture-absorption and antibiotic functions can also come in handy.

A good idea is to prepare a pair of slippers at work and change into them on days you are wearing boots. Avoid wearing the same pair of shoes, any shoes, for several days because it takes at least a day for them to dry.

When you get home, spray the insides of the boots with anti-fungal spray and air them out. Stick in a roll of newspaper when you do not wear them to prevent odor and germs. Tossing in a green tea bag could also help. Deodorant sprays could be effective for a while but regular perfumes could worsen the smell and even taint the boots.