Pena, the guest of honor at Elvis’ birthday party, cut into a 1.2-meter-high cake fashioned to look like stacked television sets as fans cheered both the singer and the miner outside Elvis’ longtime Memphis home on Saturday.

An avid Elvis fan, Pena has been on a whirlwind tour of Memphis, getting a private tour of Graceland, attending a Memphis Grizzlies NBA basketball game and leading the walking of the ducks at the Peabody Hotel.

Pena spent 69 days trapped underground along with 32 other miners after a mine collapse in Chile. Pena sang Elvis songs to lift the morale of his friends before their rescue in October.

He speaks little English ― except for the words of Elvis tunes ― and has been using a translator. 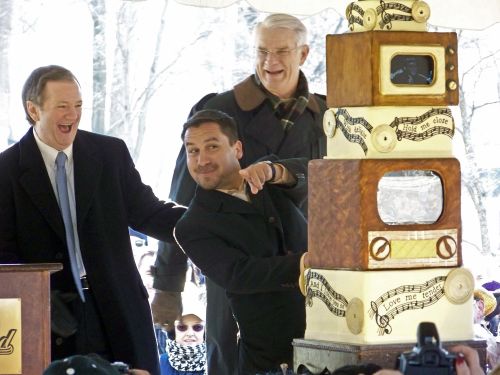 Edison Pena, one of the 33 Chilean miners who survived 69 days underground after a mine collapse, peers out from behind Elvis Presley’s 76th birthday cake while cutting into the bottom layer as Elvis Presley Enterprises president Jack Soden (left) and Shelby County mayor Mark Luttrell (right) look on the grounds of the late rock’n’roll legend’s Graceland mansion in Memphis on Saturday. AFP-Yonhap News
“It’s a pleasure to be here, with so many beautiful people,” Pena said in Spanish.

“I never thought I would survive, and escape my trap. This is a gift from God. Viva Elvis. Viva Memphis.”

Then, he uttered two newly learned words in English of the Southern variety: “Hey y’all.” That drew loud laughter from the crowd.

Some fans asked Pena for a song, so he led everyone in singing Elvis’ “The Wonder of You.” He was reluctant at first ― he’s been asked to sing by fans and media at nearly every turn ― but he showed off his good singing voice once again and did some of Elvis’ trademark pointing and swirling arm motions.

Memphis Mayor A C Wharton read a list of musical artists who’ve said they were influenced by Elvis’ music and performance style, from Elton John to John Lennon.

“Before people fainted over Michael Jackson, screamed over Van Halen, swooned over the Jonas Brothers, and even goo-gooed over (Lady) Gaga, Elvis Presley set the world on fire,” Wharton said.

Elvis was born Jan. 8, 1935, in Tupelo, Mississippi. His birthday, while meaningful to Elvis fans around the world, does not attract the throngs of people who make the pilgrimage to Graceland to remember his death. He died Aug. 16, 1977.

Jerry Engelby, of Jefferson City, Missouri, has been an Elvis fan since she was 13. She comes to Memphis as often as she can.

Some fans were as eager to see Pena as they were to honor the king of rock ‘n’ roll.

Sue Mack waved at Pena and took photos of the miner.

“I followed the miners the entire time they were under there,” Mack said. “When I found out he was an Elvis fan, I said ‘I’ve got to see him.’ He was the topping to the cake today.”

Standing nearby, Pat Parris asked Pena in Spanish to give her a kiss. He obliged.

For one moment, Edison Pena again did what seemed impossible: He was bigger than Elvis.