The original settler, Martin Markut, was a schoolteacher before he made the arduous journey from Switzerland to the heartland of America. Over the years, Martin’s descendants changed the spelling of their name, mechanized, industrialized, moved from the Highland area to Greenville, downsized and eventually went back to a simpler approach of pasture feeding and natural medicine.

Most recently, John Marcoot, 58 ― the sixth generation of the family to raise dairy cattle ― realized that small-scale milk production was no longer a viable business model. He and his daughters decided that there was a promising future making artisanal cheese.

The family built a 3,300-square-foot building with a room for cheesemaking, a milk-processing room, a retail store and a man-made aging cave. They hired consultants, including St. Louis-based Neville McLaughlin, who’s helped set up artisanal cheese dairies in the area and across the country. 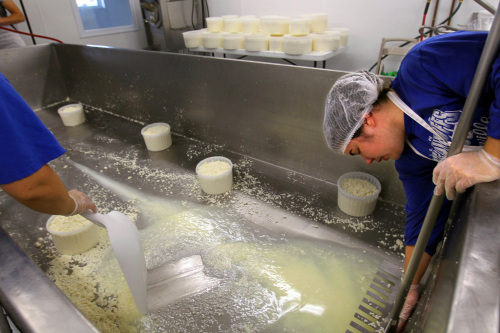 “Jersey milk is higher in butterfat,” says Amy Marcoot, 28, one of two daughters who work full-time on the Marcoot farm. “It’s perfect for cheesemaking.”

Every Monday, Wednesday and Friday, Audie Wall, 29 ― Amy’s lifelong friend, who grew up down the road ― oversees a new batch of cheese.

Milk is pumped from holding tanks into a rectangular stainless steel vat about 20 feet long. Depending on the style of cheese being made, different cultures are added, along with rennet. The milk is heated to a specific temperature as it separates into curds (solids) and whey (liquid).

The whey is drained from the vat, and the curds are pressed into circular molds called hoops. The molds are placed on top of each other, using gravity and weight to compress the curds and press out the remaining whey.

The wheels of cheese are carried downstairs into the temperature-controlled aging cave. Depending on the desired style of the cheese, the wheels might be soaked in a brining solution. All are aged for various periods. Jack cheese is ready in as little as two weeks, while Alpine ― an Asiago/Swiss blend ― will age for up to a year.

On any given day, between 8 and 12 tons of cheese is aging in the cave. Other styles include a Cheddar called Shorty’s Pride, Havarti, Tomme, Gouda and a cheese the Marcoots call Heritage, made in the style of Appenzeller. The Marcoots also make flavored cheese curds.

The cheeses sell for between $8 and $20 a pound. In addition to a small retail store at the Greenville farm ― 526 Dudleyville Road ― the Marcoots sell their cheese directly at several farmers markets. It’s also available at Local Harvest Grocery, 3148 Morgan Ford Road in St. Louis, and at Sappington Farmers Market, 8400 Watson Road, and they expect it to be in Dierbergs Markets early next year.

The cheesemaking crew is a well-educated lot. Amy and her sister, Brooke Segrest, 23, have degrees in education. Another sister, Beth, 26, has an undergraduate degree in human development and is working on a master’s degree in recreational therapy. Beth gets pressed into service, so to speak, whenever she’s home from school.

Chief cheesemaker Wall has a college degree in industrial design. On top of that, she’s a commercial helicopter pilot.

“Mom and Dad always said to give yourself lots of options in life,” Amy says.

In addition to making and selling cheese, the Marcoot family hopes to make the farm a destination.

“Ever since I was a little girl, Dad has always talked about agritourism,” Amy says.

In anticipation of visitors, the family built a long hall across the front of the new building and installed windows between the hall and the cheesemaking facilities.

“Now school groups can come out and we can give tours,” Amy says. “In the longer run, we’d like to have quarters upstairs so that people could come and stay here for a few days and have a real on-farm experience.”

The newest incarnation of the Marcoot farm hasn’t made the days any shorter for John Marcoot. He begins at 4 in the morning, milking the farm’s 65 cows, and usually doesn’t finish until well after dark.

But he’s happy that this latest adaptation promises to let his daughters continue the family heritage.

“We saw this as a viable solution for at least another generation or two,” John Marcoot says.

Amy sees an even longer horizon.

“We hope many more after that,” she says.

Place the cheese-topped bread, cheese side up, in the skillet. Cover the skillet and cook until the bread is golden brown on the bottom and the cheese is just beginning to melt, 2 to 3 minutes.

Arrange 2 slices of tomato and 3 slices of avocado on top of the cheese, and place another piece of bread on each sandwich. Turn the sandwiches over, pressing each with a spatula to keep it together. Cook, uncovered, until the second side is golden brown, 2 to 3 minutes. Continue to press sandwiches with a spatula while cooking.

Transfer sandwiches to plates, cut in half and serve.