For people with tinnitus, a phantom sound only they can hear plagues their every waking moment. Imagine a Salvation Army bell ringer camped out in your head every day, all day.

Despite afflicting an estimated 50 million people in the United States, often as a result of injury or repeated exposure to loud noises, the condition has no cures and few effective treatments, though a newer approach is now available at Duke University.

The intervention, called Neuromonics, retrains people to manage how they hear the internal sound. But it is not covered by insurance and is expensive ― about $4,500 for a device that resembles a portable music player and for sessions with an audiologist to tailor the treatment. 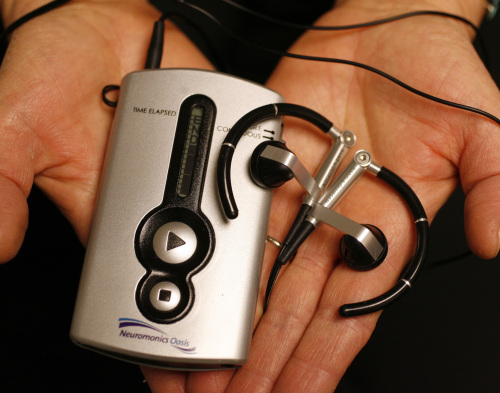 A Neuromonics device
Teri Kim, 48, of Cary, North Carolina, started the therapy in August, and almost quit a month into it when she still had not gotten relief from the high-pitched whine that has blared in her head for years. Then she gradually began having good days and even good weeks as the whine began to diminish.

“It was wonderful,” Kim said.

The therapy works on the finding that many cases of tinnitus are produced inside the brain, not the ear.

Rebecca Price, an audiologist at Duke who provides the therapy, said the internal sound is often accompanied by hearing loss. When the ear can no longer pick up a certain sound frequency, scientists theorize, the brain fills the void, causing a non-stop din.

For most, the sound is a minor nuisance, but about 12 million sufferers in the United States find it so troubling they seek medical help, according to the American Tinnitus Association, an advocacy group. About 2 million people claim some degree of disability from the disorder.

Brain imaging has provided researchers with clues to the cause, homing in on areas involved in auditory processing, as well as regions associated with memory and emotion.

And that is where sound therapy can be effective.

Using the Neuromonics device, people like Kim can reprogram their brains to filter out most of the offending sound. The process starts by creating a recording of the person’s unique internal menace, as the patient describes the sound and the audiology team works to mimic it. The sound is then masked under a benign “white” noise such as waves or a radiator hissing. 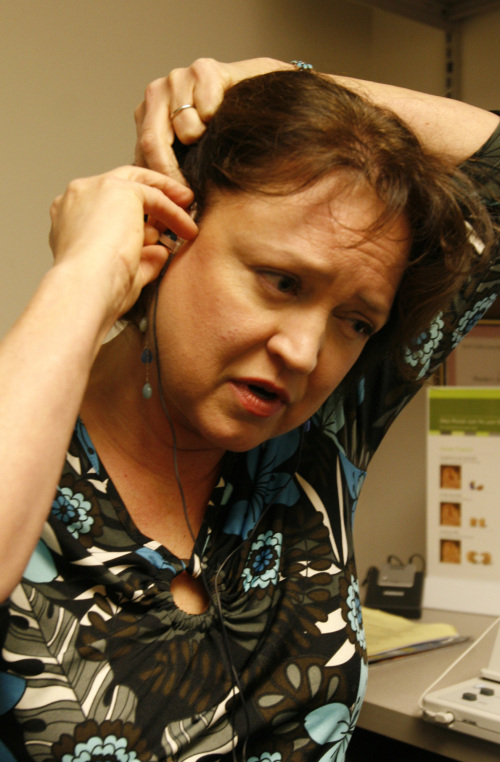 Teri Kim of Cary puts on the two earpieces for her Neuromonics tinnitus treatment during a test session in Duke Hospital’s Department of Speech Pathology and Audiology in Durham, North Carolina. (MCT)
That combined sound is then layered under a series of four different musical compositions, including classical and New Age selections. Each of the pieces has been further modified to reduce the bass and amplify the higher tones.

For at least two hours a day for two months, patients listen to the special music with a portable player ― any combination of the four tunes they want. The doctored music drowns out the ringing.

“Patients love it,” Price said, adding that by easing the phantom sound, patients begin to associate relief with the music.

After two months, the second phase starts, this time with the white masking noise removed, leaving just the music and the recording of the patient’s sound.

“We’ve already trained their brains to respond positively to the music, so when they hear ringing, they don’t freak out about it,” Price said.

After about four to six months in the second phase, the brain is retrained to filter out much of the phantom sound.

Kim, who has stayed in the first phase for four months, possibly because her case was so severe, recalled that before the treatments, the ringing in her head grew so loud as the day wore on, she suffered physical pain.

“It made my teeth hurt,” she said.

Although the sound has diminished since she began the therapy, it has not been silenced. And the cost was a huge hurdle.

For those reasons, finding a cure is the primary objective of the national tinnitus advocacy group.

Jennifer Born, director of public affairs for the American Tinnitus Association, said research funding into the condition has increased ten-fold in five years, to $10 million, in large part because of interest from the U.S. Department of Defense.

Born said tinnitus is the leading cause for disability payments to service members returning from Iraq and Afghanistan, whose training and combat missions involved heavy equipment, explosions and loud gunfire.

The Department of Veterans Affairs reports that more than 760,000 former service members have been diagnosed with the condition, which is typically grounds for a partial disability payment

“It’s staggering, but it’s a fact,” Born said. “It’s a growing problem among vets and the general public, and it’s been neglected.”

Many of those in the general public who have the condition blame loud music. Born traces her tinnitus to a concert she attended at age 15. And the threat of a widening epidemic grows larger with the use of ear buds for MP3 players, which blare music directly into the ear.

Kim offered a cautionary tale: “I had to give up listening to music because it made it worse.”

Now after treatment, she said she can at least listen to some music, although songs in upper pitches still cause discomfort. The real test will be when she can again listen to her much-loved ABBA without hitting the roof.