Many baby boomers still rely primarily on paper for both professional and personal task managing, but you would have to scour an office park for a while to find someone under age 35 who carries a paper planner everywhere ― if they ever did. For them, keeping track of events and tasks is mostly digital.

“They have their own e-mail addresses, too,” she said. “So at some point, when they can type, they can use them.”

As the co-author of the blog geekgirlsguide.com, Wilker, 35, was an early adopter of techno-time management. But she is representative of a generational shift affecting the way people have organized their days for more than half a century. 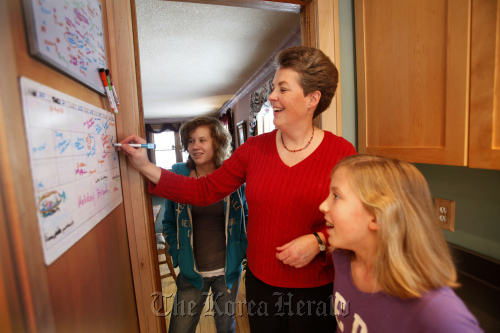 People are switching from printed datebooks and calendars to electronic forms, but Ann Mathews-Lingen still keeps important dates written on a kitchen wall calendar for the family to follow. She is shown at home in St. Paul, Minnesota with daughters Emma (left) and Claire. (Minneapolis Star Tribune/MCT)
Sales of decorative wall calendars were down 28 percent in 2009 from 2005, and sales of datebooks, appointment books and desk calendars decreased 12 percent in the time period, according to Unity Marketing. Top paper-product companies have seen the writing on the iPad, and are adapting with hybrid digital/paper marketing strategies.

FranklinCovey has downsized its heavyweight planners and developed integrated apps for the iPhone and Blackberry. Day-Timer began developing desktop apps in the mid-1990s. Smead, an office-product and records-management company based in Hastings, Minnesota, has an “Operation Organomics” program on its website designed to encourage people to use technology to enhance their paper planning.

“To-do lists have been around since man first created the stone tablet and a chisel,” said Louise Kurzeka, a professional organizing consultant who works with Smead. “When the phone falls in the toilet or the power goes out, we get a reminder that technology doesn’t serve every purpose.”

“And there’s something about a datebook that you open on your desk, flipping the pages, pen in hand, marking them up, it’s a different experience than your Outlook calendar,” she said. “It appeals to a different part of the brain. Paper helps some people focus more on what they need to get done.”

Spoken like someone whose job is promoting a company that makes paper organizational products, but she’s right: Multiple studies have shown that writing things down by hand makes remembering them more likely than if you keyed them in. However, it’s too soon to tell whether that will remain true for younger people who grew up getting their information in seconds by typing in key words.

Millennials aren’t the only ones embracing digital life planning.

Shared calendars have been a godsend for divorced couples who co-parent in separate households. St. Paul social worker Anne Bushnell and her ex-husband, public-radio reporter Stephen Smith, started using a Google calendar five years ago. Their 15-year-old son regularly accesses it to key in dates of events he’ll need rides to, such as play rehearsals.

“My ex travels half the month, and it used to be really hard to track his schedule,” Bushnell said. “Now we no longer have to have datebook meetings. The online calendar is the final word. If it’s not on there, it doesn’t exist.”

But plenty of parents still swear by the old-style kitchen wall as the center of planning operations.

Ann Mathews-Lingen of St. Paul uses two customized, erasable whiteboards, one gridded for the month and one for the week, with sections at the bottom assigned to each family member’s activities and chores. Mathews-Lingen, 49, home-schools her tween and teen and, as a part-time job, administers state-required tests to hundreds of other home-schoolers.

Mathews-Lingen calls herself digital-phobic and defends her preference for a “very visible thing” that “works for everyone, without turning anything on, and you can see big blocks of time all at once. And the to-do lists underneath help the kids assume responsibility, to know what’s expected of them every time they walk by it.”

It is unlikely paper calendars and datebooks will ever die off completely ― for sentimental reasons, if nothing else.

“It never occurred to me that people liked digital calendars; these things lack personality, except as nags,” wrote New York Times columnist Virginia Heffernan earlier this year, in a nostalgic ode to her former Filofax. She missed her old-fashioned organizational tool in part because it served as a diary. Many people keep stacks of their old appointment books in storage mostly for that purpose ― reminiscing.

“People like to look at old checkbooks, bank statements and datebooks, because it helps them remember not only events they wouldn’t otherwise, but the sequence of those events,” Kurzeka said.

Younger adults with a retro-hipster aesthetic also see a certain appeal in arty datebooks and calendars, as they recently did with wristwatches, sparking new growth in another market that has been looking dated.

Even “geek girl” Wilker, who has been completely digital for years, said there may come a time when she reconsiders a paper calendar for the kitchen wall: “When our kids are old enough to contribute to it.”