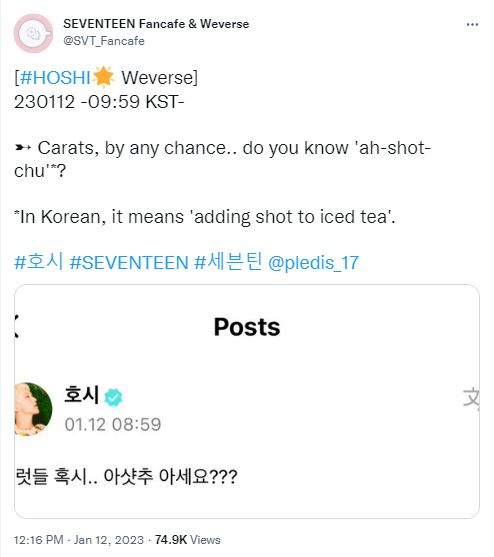 Do you know what "ah-shot-chu" means?

Recently, Hoshi of the K-pop group Seventeen used the phrase in a Weverse message, and Zee, who provides English translations of the group's messages via Twitter, said she had a hard time deciphering the meaning.

"I never heard of it until then, but could get the gist that it was a drink due to the word 'shot.' After researching, I found out it's 'shot added to iced tea,'" Zee, who runs the biggest translation page for Seventeen on Twitter said.

"Understanding is one thing, but delivering the meaning would be the harder part."

The main source of Korean translations for foreign fans are official subtitles provided by agencies and fan-operated translation communities. In the case of social media posts or live broadcasts, many fans rely on auto-generated translations, which are often inaccurate and lacking in context.

This is where translators like Zee come in. Zee's Twitter page, which has 326,7000 followers, provides translations for the 13 member-act's official fan website and Weverse messages. The biggest of such K-pop fan translation pages, Bangtan Sub, shares instant translations for BTS and is followed by 1.3 million fans.

K-pop has inspired many foreign fans to learn Korean. According to a survey conducted by the Korea Tourism Organization in 2020 on 12,663 foreign K-pop fans, 63.8 percent answered they were interested in the Korean language and Hangeul, the Korean writing system, as well.

Kimmi Kerner, 24, flew from her hometown in the US state of New Jersey to Korea last year to learn Korean. According to Kerner -- a Seventeen fan since 2015 -- K-pop's popularity has grown significantly in the West in recent years.

"It’s become mainstream in a lot of ways. There are a lot of Western artists doing collaborations with K-pop artist or groups, way more than there has been," Kerner said. 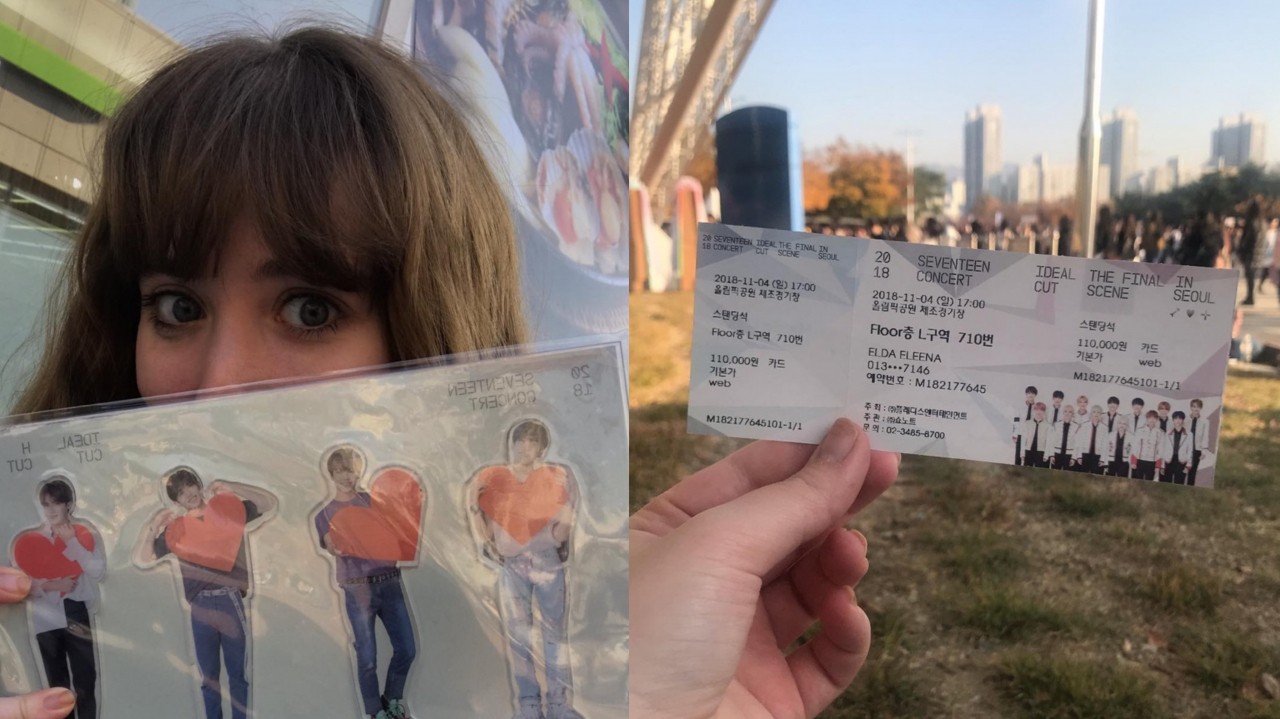 Indeed, with the sensational band BTS at the forefront, K-pop artists have been expanding their foothold inside the Western music scene. In December 2020, for the first time in history, BTS' single "Life Goes On" debuted at No. 1 on Billboard's main singles Hot 100 chart as the first non-English song to top the chart in its 62-year history.

Thanks to such a shift in the music genre's reputation, the general interest in learning the language has also been growing. The state-run King Sejong Institute, which started in 2007 with just 13 language centers in three countries, now runs 244 centers across 84 countries, with an accumulated number of over 584,000 students having enrolled in the centers, as of 2021.

More institutes around the world, including schools in France, Germany, Vietnam and Indonesia, have introduced Korean language courses into their regular programs. According to Kerner, who attended a university in Ireland, her school also started a Korean language program in 2020.

"A lot of people (who liked K-pop) I talked to studied or wanted to study Korean. I think when something you love is in another language, it makes you want to learn the language. It makes it easier to enjoy the content if you know the language," said Kerner, who is also a fervent fan of Korean dramas.

In line with such trends, K-pop companies have jumped into the language education business using intellectual properties of their artists.

Hybe Edu, first established by BTS label Hybe and now affiliated with the English learning app Cake, launched the "Learn! Korean with BTS Book Package" in 2020. The textbook is currently used by institutions in some 30 countries around the world, including University of Sheffield in the UK and the EDHEC Business School in France. YG Entertainment also launched a similar product, "Blackpink In Your Korean," which teaches Korean in English and Japanese with stories and illustrations based on the quartet.

What has propelled such boom in learning Korean among K-pop fans is the prevalence of online content. Not only do artists address fans directly through social media, but agencies create and share videos featuring their artists via platforms such as YouTube and Weverse. Kerner said TV reality shows that feature her favorite idols, in particular, helped her learn practical Korean.

Among global fans, Twitter is the main platform that they use to communicate with each other. In 2021, there were around 7.8 billion K-pop tweets, a number equivalent to the world's total population. This was an increase by 16 percent from 6.7 billion from 2020. 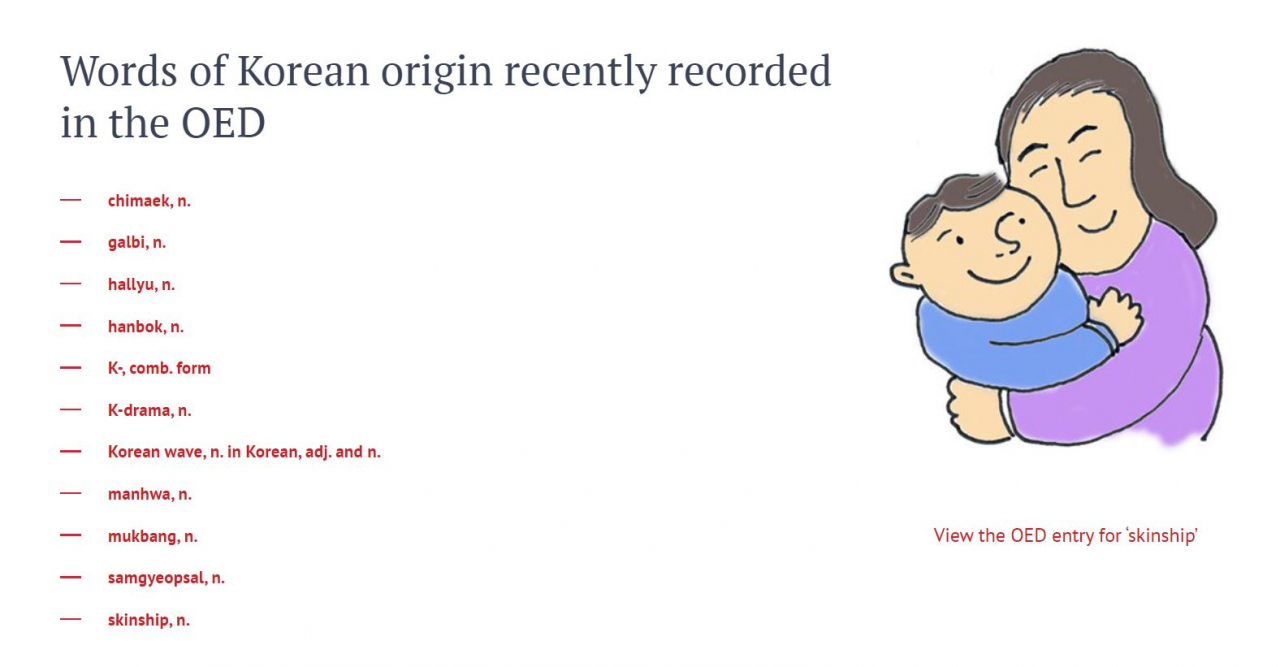 Dr. Jieun Kiaer, a Korean linguistics professor at the University of Oxford, defined this new form of Korean as "fandom romanization."

"In a bottom-up society where social media plays the key role in sharing and creating information, linguistic authorities do not have any power. Nobody can say what is right or wrong. Everyone wants to romanize in their own way. And what matters is that there is a great variety, and what survives and thrives are the ones that become popular," Kiaer told The Korea Herald via email.

Some of those words that survived and were popularized became official in 2021 when the Oxford English Dictionary added 26 new words of Korean origin. Among them, words such as "unni" and "noona" were spelled different from the Korean romanization. Newly coined or hybrid words, such as "mukbang" and "chimaek," were added to the OED even before the standard Korean dictionary included them.

Kiaer explained that such variety in the form of romanized Korean is mainly due to Hangeul's phonemic principle, which she says makes it hard for foreigners unfamiliar with Hangeul to write through just hearing.

"K-pop is Korean music. So it has to be transliterated. Fans write down all differently according to how they hear, and these different forms of romanized words get spread," she explained.

But it's not just the shapes that change. Language lives among the people, and as people and society evolve, language also picks up different meanings when it settles in a different community.

"For example, 'oppa' has an age-sensitive meaning in Korea, but when it is used in the non-Korean context, it's (used as) an endearment term. These words that we use to call people, they lose their hierarchical nature and become neutralized," Kiaer said.

The Korean professor, who is also a consultant for Korean language to the OED, said the dictionary's addition of new Korean origin words were in part driven by the popularity of K-pop and Hallyu -- or the Korean Wave -- in social media.

"Social media is the fueling force in the growth of Hallyu. The two are inseparable. They (K-pop fans) are very proactive in terms of creating, sharing and building the community through their communication," she explained.

A tweet reply on K-pop Herald's Twitter post reads "maknae fighting," a mix of the Korean word "maknae," meaning "the youngest member," and "fighting," a Konglish expression that is used to show support or encouragement. (Screenshot of K-pop Herald Twitter)

Some may criticize that the new trend among international K-pop and Hallyu fans are a deterioration of traditional Korean. However, Kiaer, who is researching the evolution of Korean language at its forefront, says this is not a timely perception.

Kiaer defined these new words as neither Korean nor non-Korean, but a "diaspora word." For Korean language to develop and excel naturally with the spread of Korean culture, the professor stresses it is important such new "diaspora words" are embraced.

"Foreign-origin words. Whenever they settle, they always take up a new form, new meaning. Everything becomes just new, just like the second generation diaspora," she said.

"Like diaspora settles and builds up a new community and new culture, it's the same with these words. It's inevitable for them to get new localized meanings."

Expounding on the concept, Kiaer said Konglish -- English loanwords that have been appropriated into Korean -- are just the same. They are a huge asset to the Korean language and the words cannot be judged right or wrong by English speakers. Once the language becomes a part of another culture, it is theirs and not ours, Kiaer said.

And this trend is not happening just in Korean but in all language systems, she added, especially due to the heightened digital globalization. The traditional borders of language are breaking down in such a digital media environment.

Kiaer noted, "It's important that the Korean people go hand in hand with Hallyu. Because Hallyu is exponentially growing. We cannot judge whether it is right and wrong. They originated from the popular Korean culture, Hallyu, but it's different from the traditional culture. It's something that the K-wave users and consumers newly created and shared. They are 'Hallyu words.'"