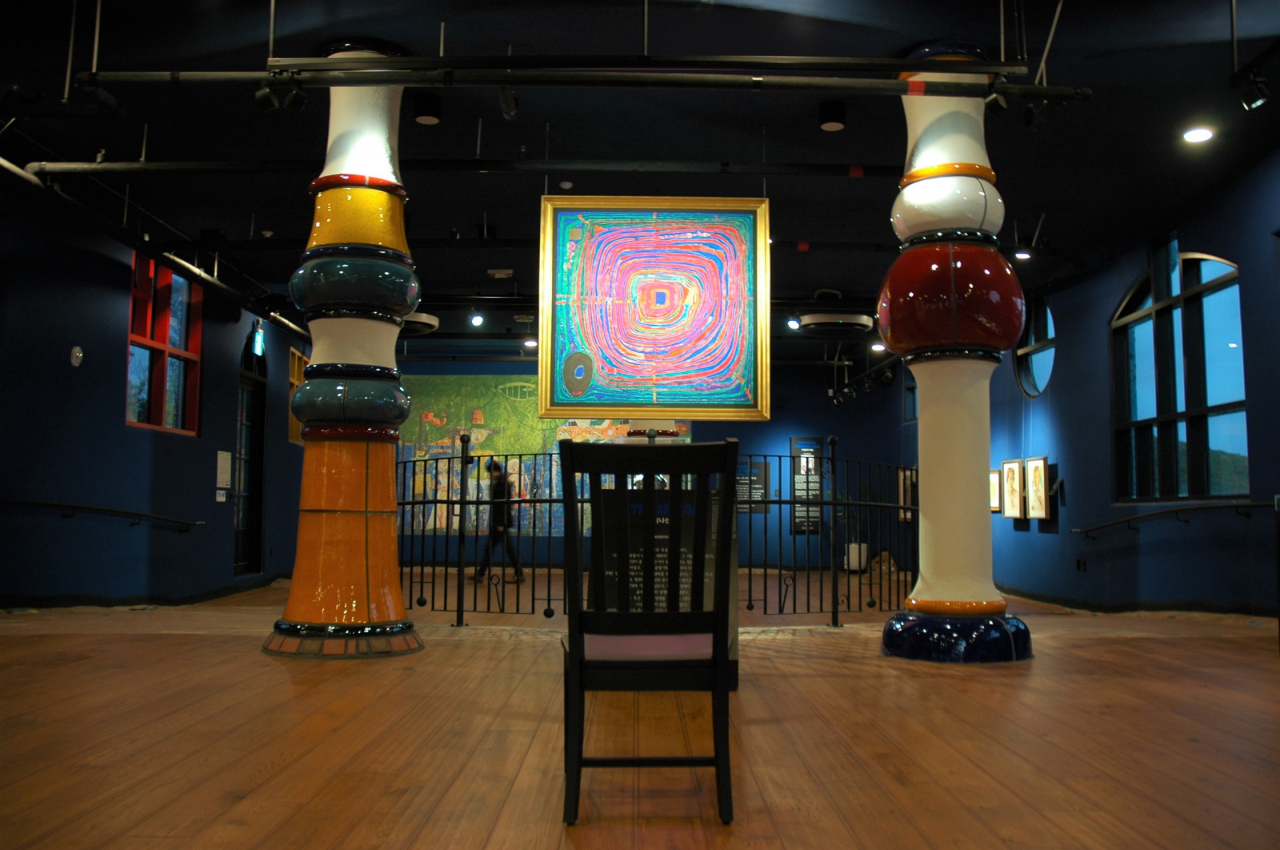 JEJU ISLAND -- Before three-wheeled electric cars and its natural and unkempt landscape raised its profile as a go-to tourist destination, Udo -- a small resort island just east of Jeju Island -- had been dismissed as a place to stay for only a few hours.

Most visitors would cycle around the island along the splendid coastline, enjoying a panoramic view of Seongsan Ilchulbong Peak, then take a ferry back to Jeju to continue their travels.

But Hundertwasser Park, a natural art park and resort named after Austrian artist Friedensreich Hundertwasser, hopes to change that. The park immerses visitors in the artist's philosophy, artwork and Udo’s natural beauty -- making many extend their stay.

Just a two- to three-minute walk from the pebble-covered parking lot near the coastal road at the southern part of Udo, an onion-themed gate marks the entrance to the world of Hundertwasser.

The hard texture of porous basalt walls on both sides of the road and phytoncide from the small cypress forest bring unexpected harmony to the Hundertwasser-themed park.

Scenic or memorable highlights of the park include a swing on a hackberry tree, a flower garden, a toad-shaped rock that brings good fortune for those who touch it and Gaksimul -- the oldest pond in Udo which is known to make one’s love come true.

Sharp-eyed visitors may recognize that almost everything -- including the steps, roads and designs of buildings -- inside the park seem different. The uniquely shaped windows and architecture full of curves surprise the visitors.

“Hundertwasser never liked a straight line. He believed that the straight line meant uniformity as an ideological concept. Just like how everything in nature is and looks different, he felt that humans and what they create with their hands need to be different as well,” Sam Lee, the director of Hundertwasser Park, told The Korea Herald.

“He felt that a person needs to take a long brush and paint everything outside within arm’s reach, letting people outside know that the person who lives in an apartment is different from the enslaved, imprisoned, standardized man,” Lee said.

“I actually had a small quarrel with the construction workers because the Hundertwasser Foundation and I had to explain the importance of making the workers design their own windows without anyone’s instruction,” the director added.

Lee said that the workers were angry at first because they had to hurry and complete the building, instead of leisurely designing windows. After reluctantly completing their own windows, Lee said he got an unexpected response from the workers.

According to the director, some thanked him for the opportunity, allowing them to say that the windows were made by them. 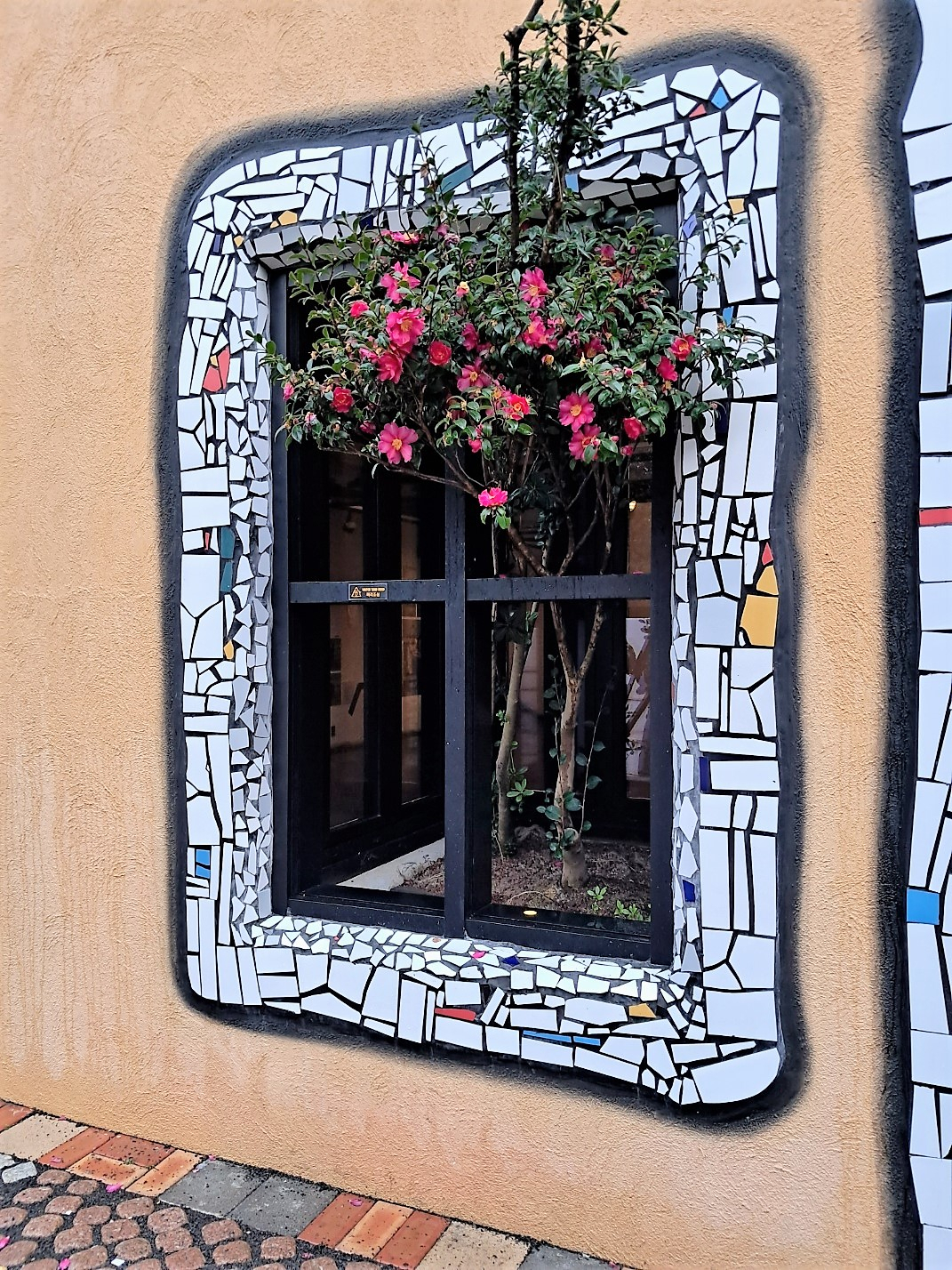 “The windows represent almost everything about Hundertwasser’s philosophy as an artist, architect and ecologist. Anyone can become an artist. We are planning a hands-on activity for visitors to design their own windows as well,” said Lee.

Following the ecologist’s idea that humans are just mere guests of nature, all aspects of the Hundertwasser Park’s buildings are connected to nature with rooftop gardens, open windows for trees and stone and red dirt trails. 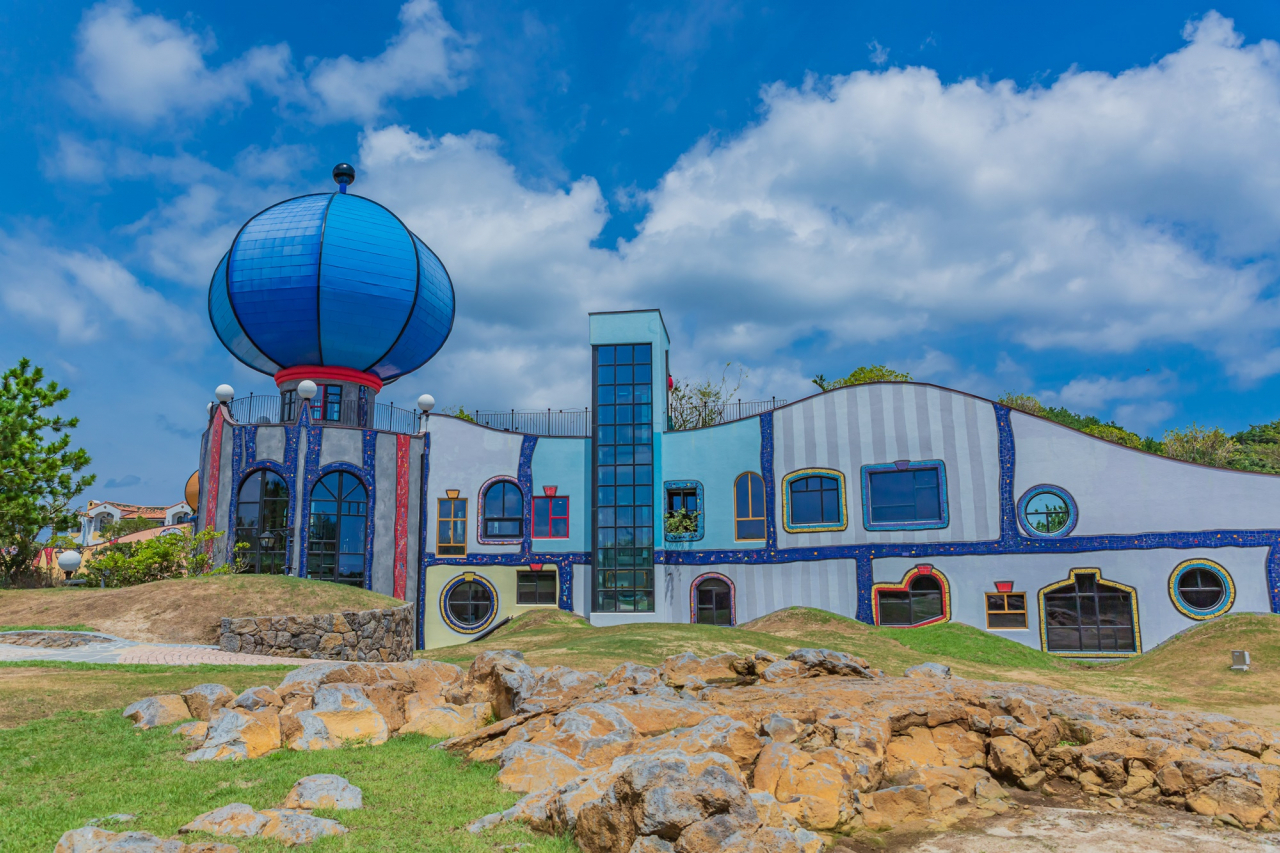 Hundertwasser Museum holds one of the only two permanent Hundertwasser exhibitions in the world. The other is in the Kunst Haus Wien Museum in Austria. Featuring the artist’s 24 original pieces, recreated murals, 3D architectural models and other drawings, the museum presents the 72-year life of the late Austrian artist from his youth, adolescence to old age.

Hundertwasser took his finished artworks out to nature to enjoy the work to its fullest. Similarly, the exhibition room is surrounded by multiple windows to make the visitors feel connected to the outside.

Hundertwasser wished all art lovers to feel different and have various interpretation about his works, so the museum does not offer any additional descriptions about the artist’s projects.

“What Hundertwasser’s thoughts were, what he said while creating the particular work are offered (as explanations of the works)," Lee told The Korea Herald.

Make sure to see “Paradise - Land of Men, Trees, Birds, Ships,” originally a mural drawn by Hundertwasser and his friend, French artist Rene Bro -- Hundertwasser Museum is the only place where the recreated version can be seen. The original mural fell apart and separated pieces are now owned by different buyers. 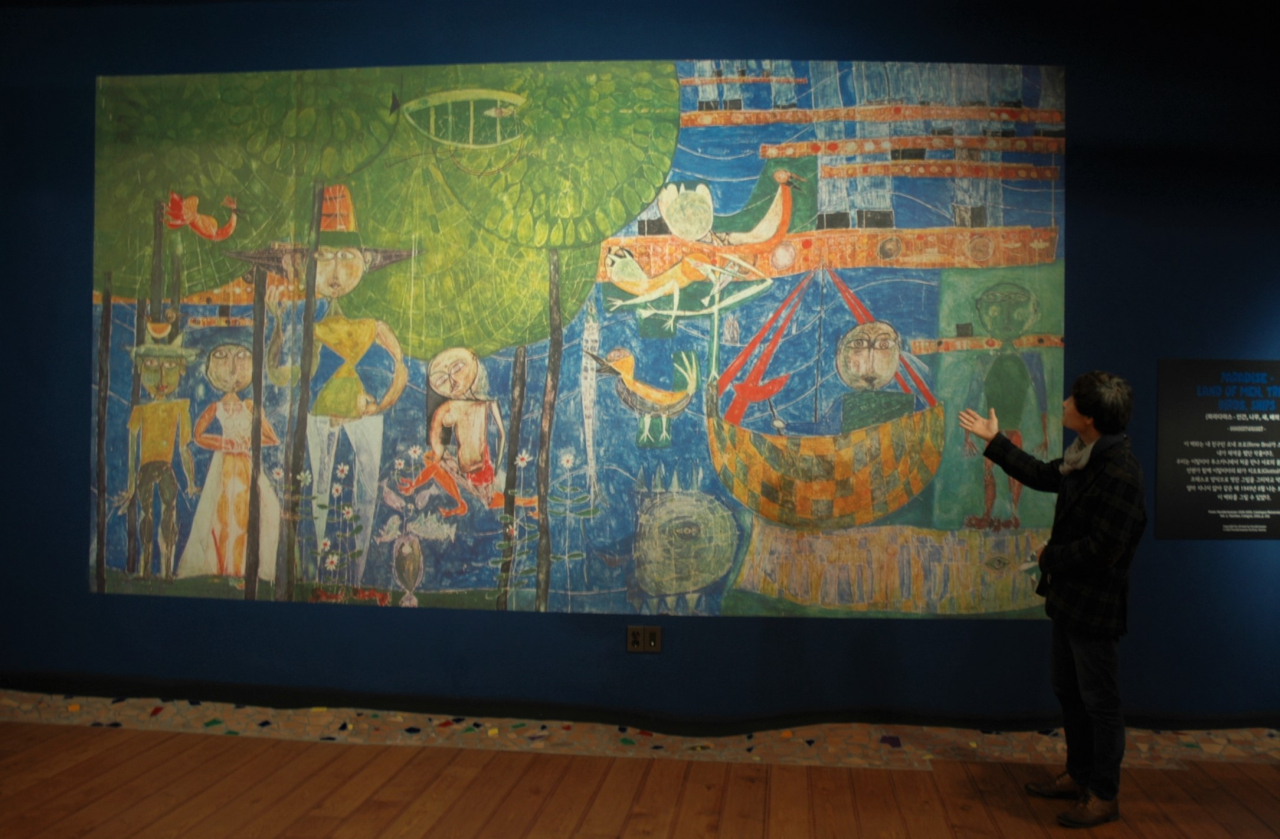 Udo Gallery, a second museum inside the park, holds an exhibition of a caricature artist with Down syndrome, who came to public light by appearing in the hit-tvN drama “Our Blues” (2022).

Ranging from a self-portrait to selected works from some 4,000 caricatures that Jung drew over seven years, the exhibition brings artistic harmony of Hundertwasser and Jung. 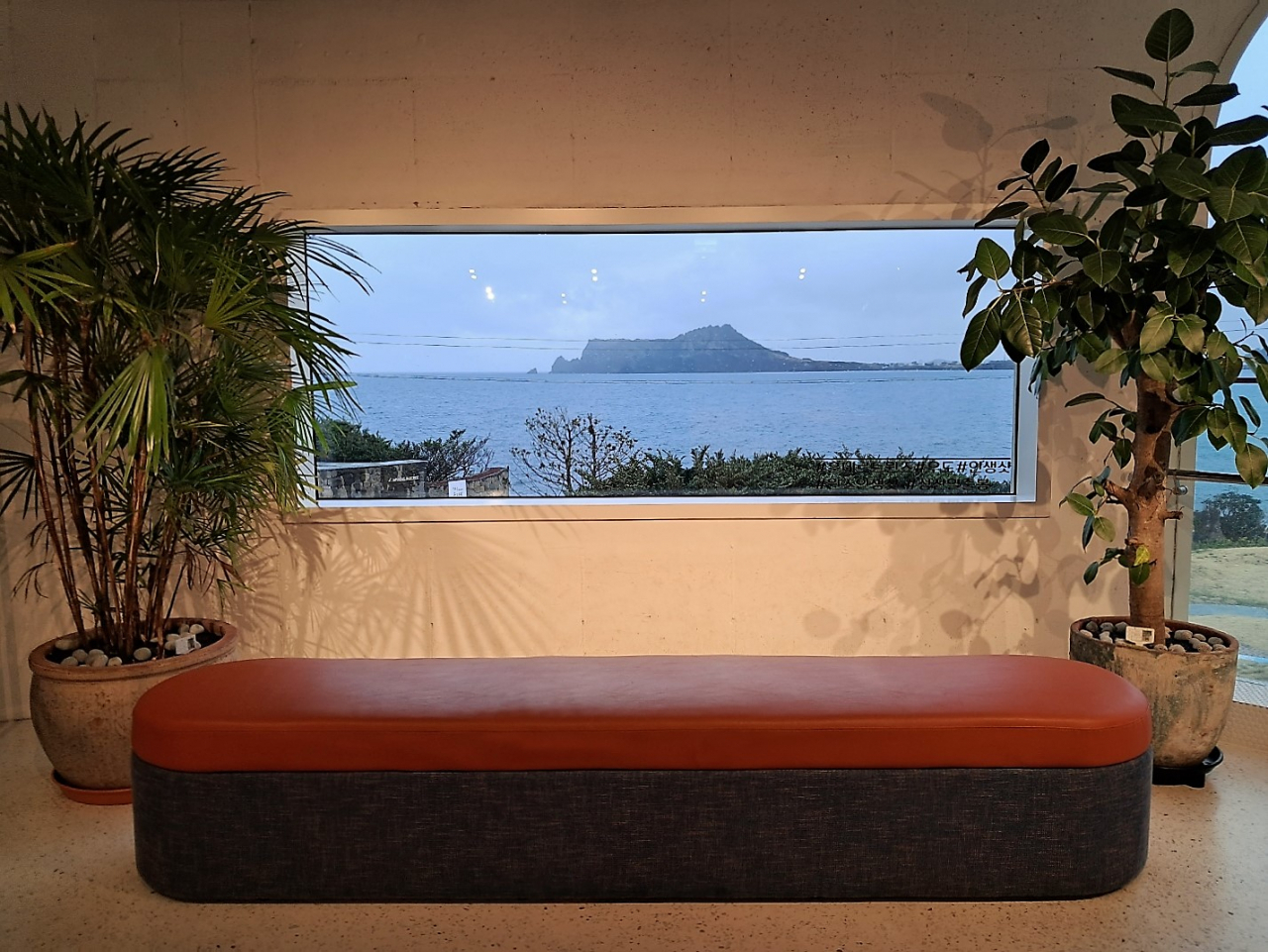 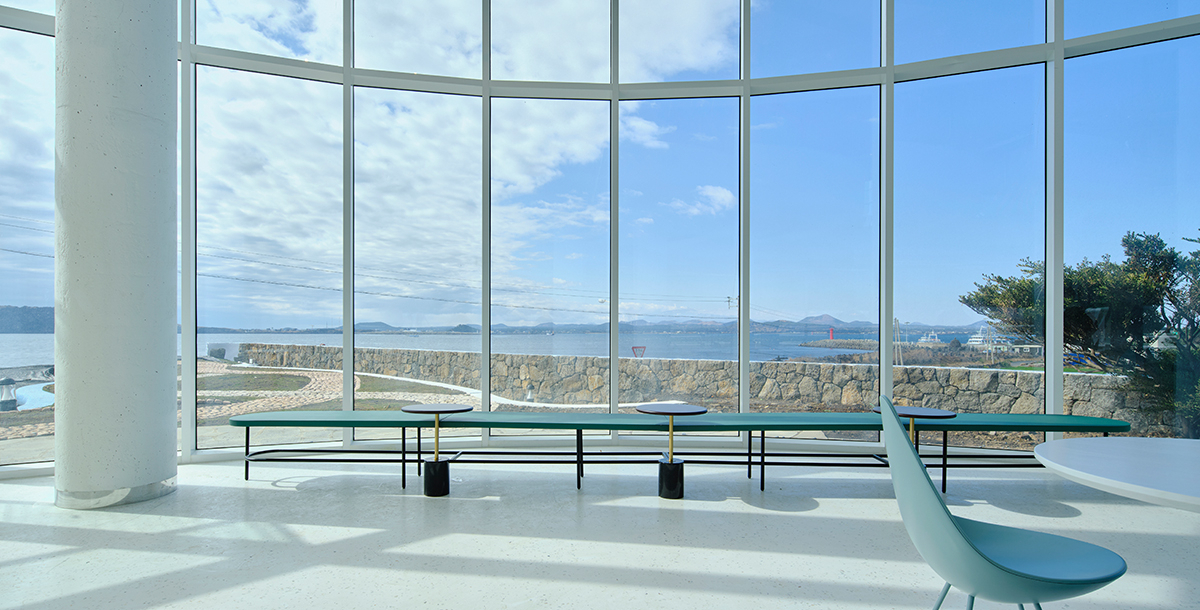 Before heading to the resort in Hunderthills, visit Cafe Hundertwinds for Udo specialties such as the Udonut, Peanut Stout and Canola Lager. 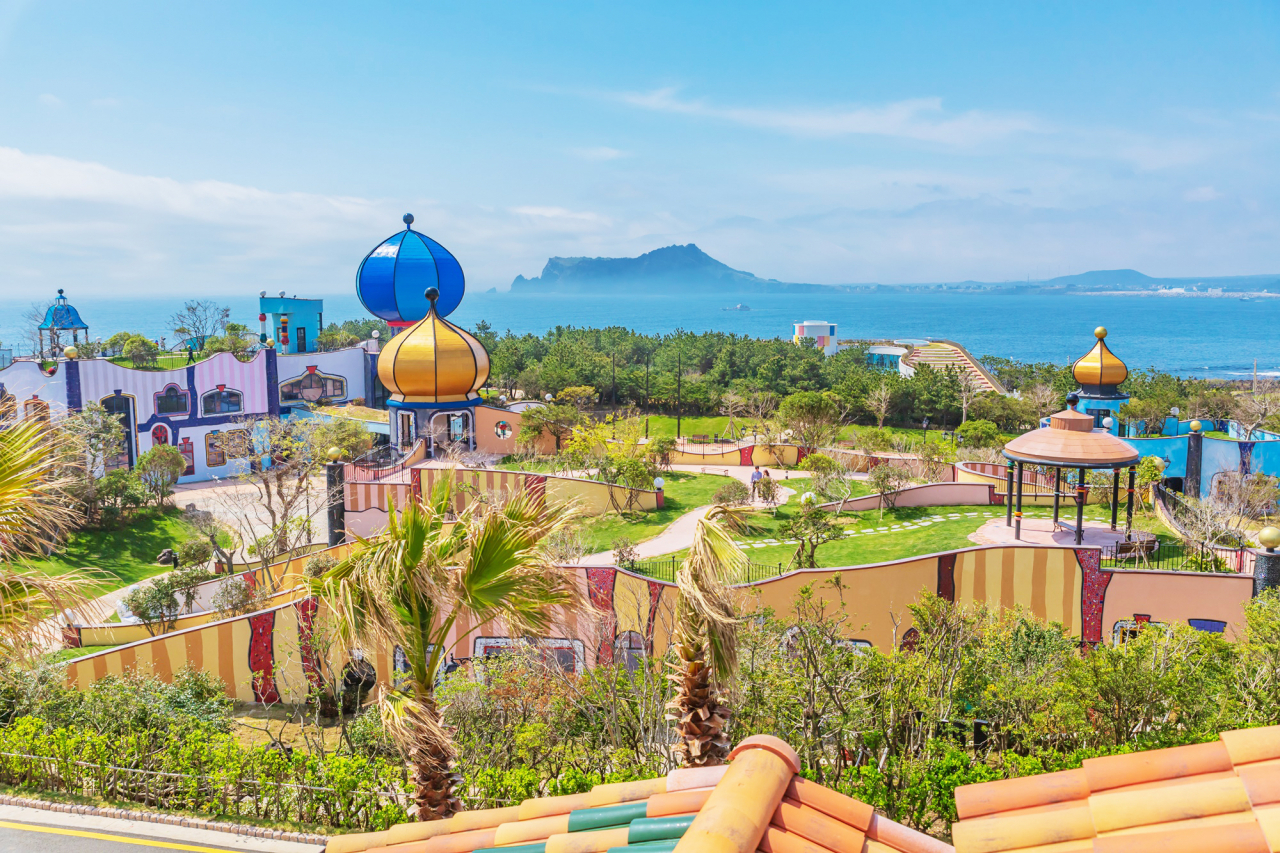