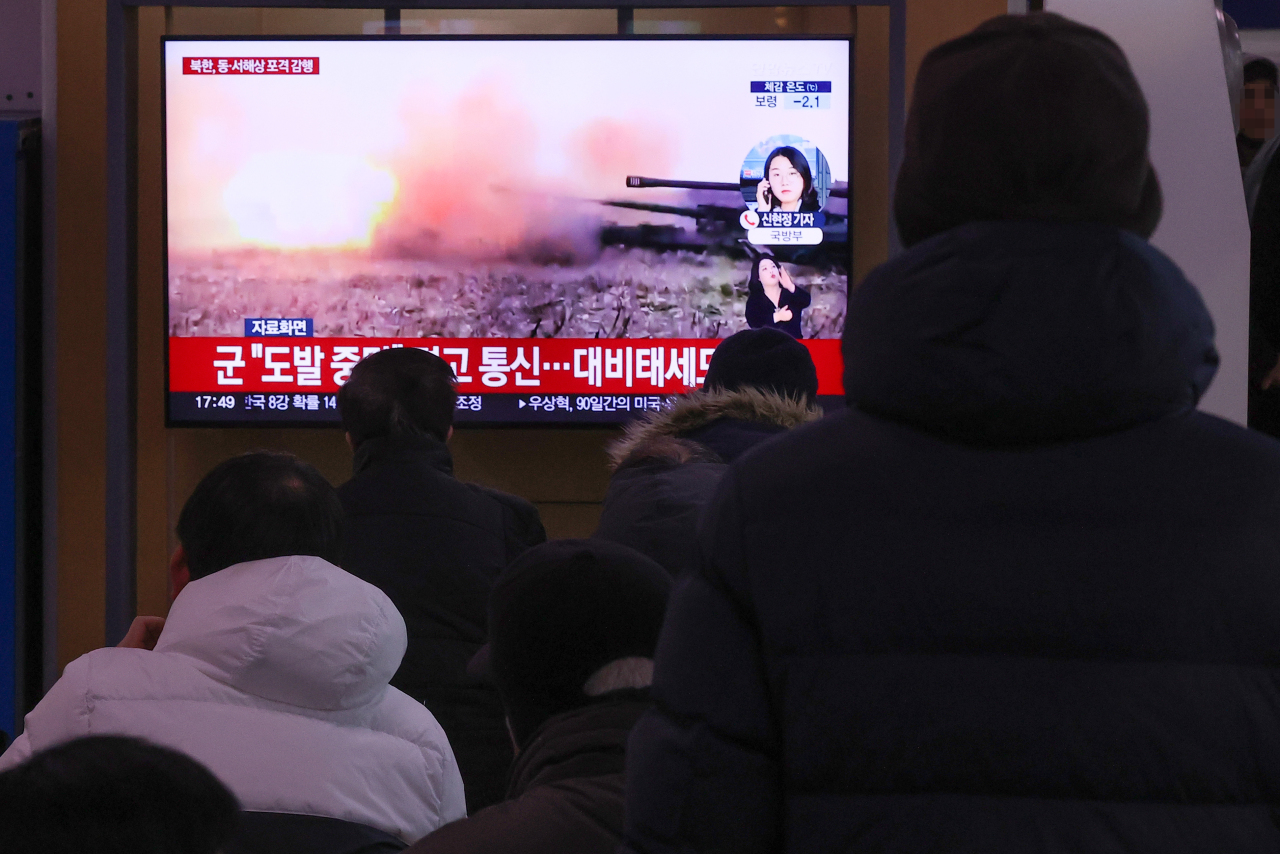 People watch a report on North Korea`s artillery firings at Seoul Station in Seoul on Monday. (Yonhap)
North Korea on Tuesday fired around 100 artillery shells toward the inter-Korean maritime buffer zone in a tit-for-tat action against South Korea and US live-fire drills staged near the border, further escalating tensions on the peninsula.

Around 90 artillery shots were fired from the area of Kosong County in Kangwon Province toward buffer zones in the East Sea from 10:00 a.m. local time, South Korea’s Joint Chiefs of Staff confirmed, adding the artillery firing continued until this afternoon.

Under a comprehensive military agreement signed on Sept. 19, 2018, the two Koreas agreed to cease all live-fire and maritime maneuver exercises in buffer zones.

North Korea’s artillery firing continued for a second straight day as the South Korean military and US Forces Korea conducted two days of planned live-fire drills in Cheorwon County, Gangwon Province. The South Korean and US militaries on Tuesday fired more than 20 shells from multiple-launch rocket systems and around 140 artillery shots from K-9 self-propelled howitzers.

The North Korean military on Tuesday confirmed that its artillery firing was in response to the combined live-fire drills in a Korean-language statement issued by an unnamed spokesperson for the General Staff of the Korean People’s Army.

The KPA General Staff ordered North Korean artillery troops on the front line to fire artillery “for the purpose of immediate, strong response and warning,” the spokesperson said, urging the “enemy side to immediately halt provocative military actions in the vicinity of the front-line area.”

“It is never acceptable for North Korea to repeatedly fire artillery shells toward the sea in violation of the Sept.19 military agreements while unfairly criticizing regular training exercises by South Korea and the US,” the Defense Ministry said in a statement.

“The Defense Ministry gravely warns that North Korea is all responsible for the consequences for its unilateral and continuous violations of the Sept. 19 military agreement,” the statement added.

In response to the persisting North Korean provocations and threats, the Yoon Suk-yeol government will start labeling the North Korean regime and its military as South Korea’s “enemy” in a soon-to-be-published defense white paper, reviving the direct reference that had been expunged by its predecessor, government officials said Tuesday.

“The military has been considering to specify the North Korean regime and its military as an enemy, but it has not finalized a precise term,” one official, who wished to remain anonymous, told The Korea Herald.

The military previously described South Korea’s enemy as “any force that threatens and violates the sovereignty, territory, people and properties of the Republic of Korea” in two biennial defense white papers, published in 2018 and 2020 under the previous Moon Jae-in government.

But President Yoon -- who has publicly called North Korea the “main enemy” -- pledged to review measures to make the public clearly recognize the North Korean regime and its military as South Korea’s enemy in his policy tasks.

Under previous conservative governments, North Korea and its military have been referred to as South Korea’s “enemy” in light of Pyongyang’s bombardment of the island Yeonpyeongdo and the sinking of the Cheonan corvette in 2010.

White papers published from 1995 to 2000 also specified North Korea as South Korea’s “main enemy” in response to its threat to turn “Seoul into a sea of fire” in 1994.

“As North Korea’s military provocations and threats including one posed by nuclear weapons and missiles persist, we will provide a clear recognition of the North Korean regime and military in the 2022 defense white paper to be published early next year,” Jeon Ha-kyu, the Defense Ministry’s acting spokesperson, said at a regular press briefing.