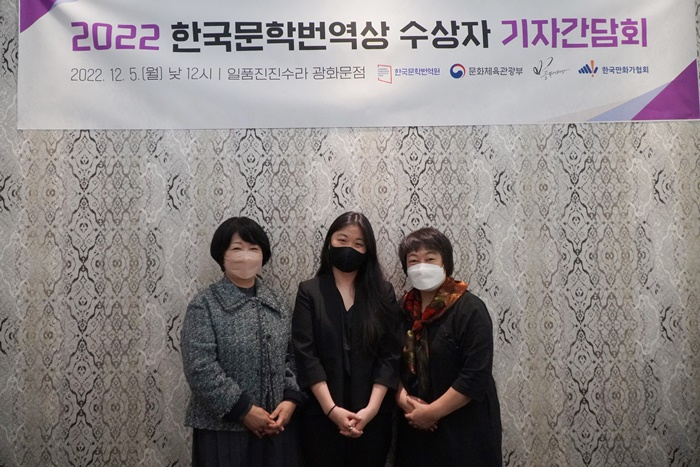 The Literature Translation Institute of Korea announced the winners of the 2022 Korea Translation Award on Monday, with four translators winning grand prizes under newly revised criteria for this year.

This year’s grand prizes were awarded to Koh Eun-ji -- who also writes under the pen name E. J. Koh -- and Marci Calabretta Cancia-Bello for their English translation of poet Yi Won’s “The World's Lightest Motorcycle”; Yu Hsin Hsin for her Chinese translation of Lee Tae-jun and seven other writers in the “Anthology of Korean Literature (2)”; and Ilngliana Tan for her Indonesian translation of Jeong You-jeong’s “Seven Years of Darkness.”

“I’m very honored … to bring Yi Won’s work to English readership and also to champion the act of translation for the readers and the writers alike,” said Cancia-Bello during the press conference in Seoul on Monday.

“Thank you so much,” said Yu Hsin Hsin. “I will try my best to make a more ‘complete’ translation.”

Kim is the CEO of CUON, a publisher in Japan. He has translated 48 works of Korean literature since 2009, and has hosted many Korea-Japan literature exchange events, including the K-Book Festival since 2011.

The award-winning translations were initially selected through a foreign screening and then a second domestic screening of 54 translated books published in 2021 in five languages: English, Chinese, Indonesia, Persian and Czech.

Previously, LTI Korea selected three or four finalists from all languages published overseas in the preceding year, but this year's awards were selected based on revised criteria.

Starting this year, LTI Korea has divided translated works into three groups -- Group 1 for English, French, Spanish and German; Group 2 for Russian, Arabic, Vietnamese, Japanese and Chinese; and Group 3 for others -- according to the impact of the translated work’s language and the acceptance of the Korean literature.

For this year’s prize, translations into English from Group 1, Chinese from Group 2 and Indonesia, Persian and Czech from Group 3 were selected for grand prizes. 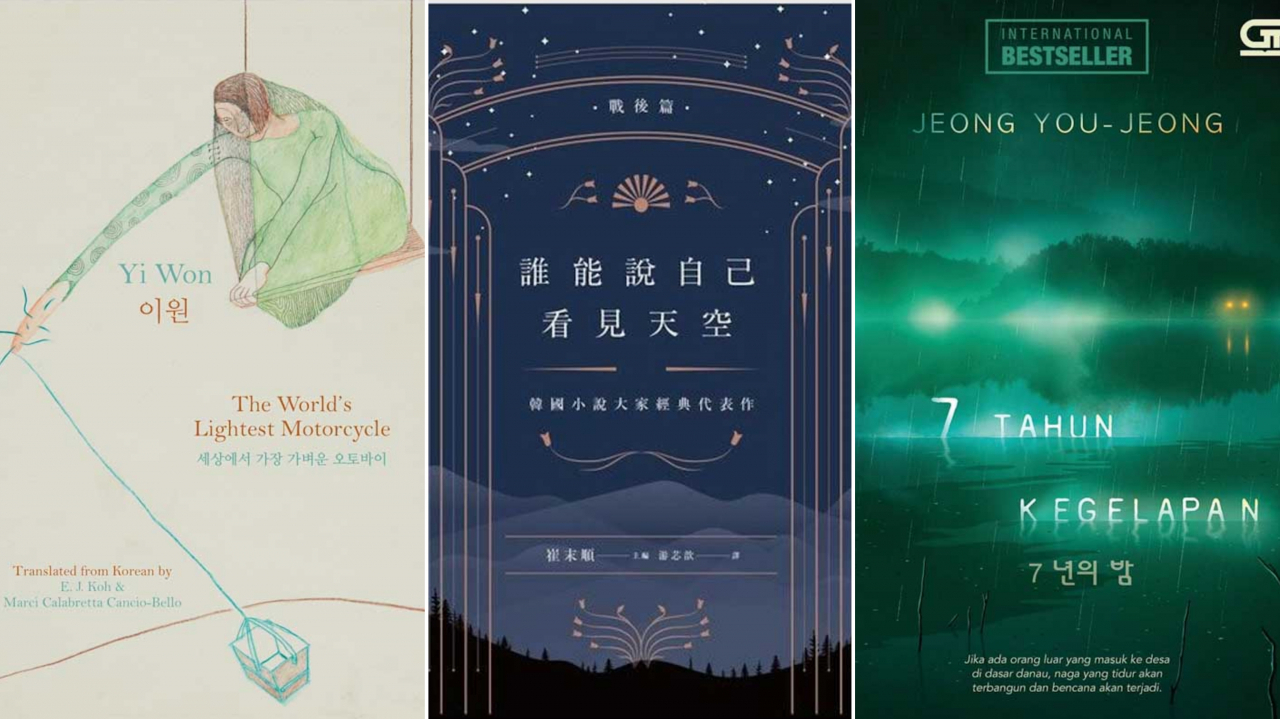 (From left) English translation of Yi Won's "The World's Lightest Motorcycle"; Indonesian translation of "Seven Years of Darkness" by Jeong You-jeong; Chinese translation of “Anthology of Korean Literature (2)” by Lee Tae-jun and seven others (LTI Korea)

At the press conference, awardees shared their views on how international readers are responding to Korean literature.

“In America, there has also been a similar boom of Korean literature translation. Initially because of ‘Vegetarian’ by Han Kang. And Choi Don-mee has done a lot for poems,” said Cancia-Bello.

“And then, of course, the explosion of K-dramas, BTS, movies like ‘Parasite’ coming over, there has been a focus on anything that includes an active translation of all art form,” she added.

Yu Hsin Hsin added that many Korean books are published in Taiwan.

“Among them, ‘Kim Ji-young, Born 1982’ by Cho Nam-ju and ‘Because I Hate Korea’ by Chang Kang-myoung are very well-received,” said Yu Hsin Hsin.

“The next author leading the boom would be Kim Soo-hyun, who wrote ‘I Decided to Live as Me,” added Sizuyo.

She said that several books by popular writers such as Han and Chung Se-rang are being released.

Meanwhile, the nine translators of the book “Red Fruit” by Lee Yu-ri were recognized with the Rookie Award. "Red Fruit” was translated into English, French, German, Spanish, Russian, Chinese, Japanese, Vietnamese and Arabic.

The annual Korean Literature Award was established in 1993 to recognize translators who have contributed to facilitating communication between Korea and the international literary scene.