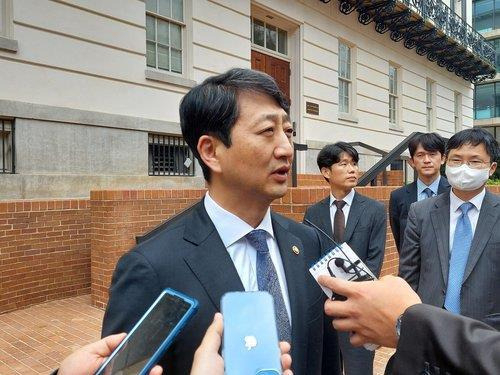 A South Korean delegation consisting of government officials and lawmakers departed for Washington on Sunday to meet their US counterparts and discuss ways to minimize the impact of the Inflation Reduction Act against local carmakers.

The five-day trip aims to put more pressure on the US Congress to revise the controversial bill, which has scrapped generous incentives for electric vehicles made outside of the US.

Korean automotive duo Hyundai and Kia, which currently operates no production base for EV models there, are among the carmakers especially hit hard by the law that took effect in August.

The Korean government has already delivered two official letters to Washington over the past month to ask for a revision to the law, stating demands which include imposing a grace period. It has yet to receive any clear response.

During the trip, the Korean delegation, led by Vice Minister of Trade Ahn Duk-geun, the nation’s top trade negotiator, is scheduled to meet with US Trade Representative Katherine Tai and John Podesta, senior adviser to US President Joe Biden on clean energy innovation and implementation.

Last week, Biden admitted there are “glitches” in the IRA, raising a glimmer of hope among its trading partners on a possible revision to the law.

“The United States makes no apology, and I make no apologies, since I wrote it (the IRA),” Biden said during a joint announcement with French President Emmanuel Macron after their bilateral summit on Thursday. The US president was responding to a question on whether he would consider granting exceptions to European companies hit by the IRA.

“But there are occasions when you write a massive piece of legislation -- and that has almost $368 billion for the largest investment in climate change on all of history. And so, there’s obviously going to be glitches in it and need to reconcile changes in it.”

Like South Korea, France and other European EV makers face the same struggle in qualifying for tax benefits in the US market under the IRA.

In a separate press gaggle on Friday, White House spokesperson Karine Jean-Pierre clarified that President Biden is not considering making legislative changes to the IRA, but that he is open to consultation.

“We don’t have any plans to go back to Congress for legislative changes to the Inflation (Reduction Act) this time,” Jean-Pierre said, explaining how the US is committed to the implementation of the “historic piece of legislation” for dealing with climate change.

At the same time, Jean-Pierre reiterated the US position that it is open to substantive consultation to address the concerns of its European counterparts.

The subsidy cut in the all-important US market comes as Hyundai Motor Group saw a recent surge in EV sales of its Hyundai and Kia brands over the past few months, led by the top-selling models Hyundai Ioniq 5 and Kia EV6.

Industry watchers say the direct impact from the IRA is expected to become more apparent next year.

In November, the Korean duo suffered slowing sales largely due to supply constraints. Sales of the Hyundai Ioniq 5 and Kia EV6 declined 24.6 percent and 46 percent, respectively, to 1,191 units and 641 units.

Separate from diplomatic efforts, Hyundai Motor Group has been going all out to expand its business in the US market, pouring trillions of won in building major EV factories there.

The Korean EV maker recently held a groundbreaking ceremony for its EV manufacturing plant in Georgia, dubbed Hyundai Motor Group Metaplant America, last month. With HMGMA expected to finish construction and start operations in the first half of 2025, it has an annual production target of 300,000 EVs on American soil.

The carmaker has also joined hands with SK On, a South Korean battery maker, and is considering investing a combined 2.5 trillion won ($1.92 billion) to set up a joint venture in the US that would facilitate an annual capacity of 20 gigawatt-hours, enough for about 300,000 EVs.