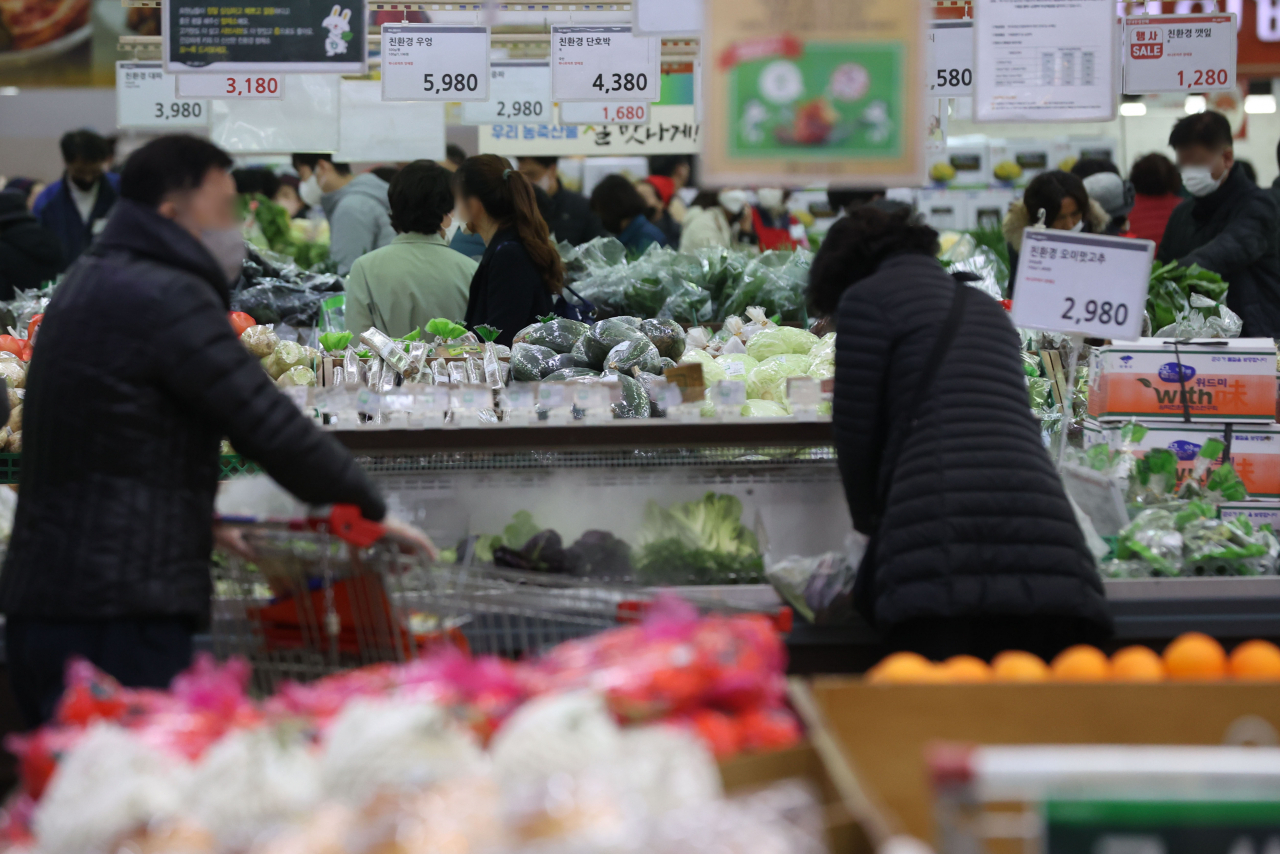 Consumer prices, a key gauge of inflation, rose 5 percent last month from a year earlier, compared with a 5.7 percent growth tallied in October, according to the data from Statistics Korea. It marked the lowest on-year increase since 4.8 percent tallied in April.

Consumer prices increased at the fastest pace in almost 24 years at 6.3 percent in July. In September, they expanded 5.6 percent on-year.

The figure stayed above 2 percent -- the central bank's inflation target over the medium term -- for the 20th straight month in November.

"The prices of processed foodstuff and personal services like dining out, along with electricity, gas, and water, continued to grow," Eo Woon-sun, a senior Statistics Korea official, said.

"But the growth in prices of agricultural, fisheries and livestock products and other industrial products like petroleum have slowed significantly," he added.

The price of utility services gained 23.1 percent on-year in November amid the soaring energy prices sparked by the prolonged war between Russia and Ukraine. South Korea relies heavily on imports for its energy needs.

The price of agricultural, fisheries and livestock products moved up 0.3 percent on-year, sharply slowing from the previous month's on-year rise of 5.2 percent.

Prices of personal services increased 6.2 percent on-year in November, slowing from the previous month's 6.4 percent rise, with those of dining out soaring 8.6 percent.

The Bank of Korea has hiked the rate by a combined 2.75 percentage points since August last year to tame inflation. The rate currently stands at 3.25 percent.

The central bank also recently lowered its 2023 growth outlook to 1.7 percent from 2.1 percent predicted three months earlier. It revised down the inflation outlook for next year from 3.7 percent to 3.6 percent as well.

The BOK said the latest inflation data is in line with its expectations but noted that price growth will likely stay in the 5 percent range until early next year, citing energy price hikes as one of the major upward risks amid downward pressure from the economic slowdown.

The government saw the November figures as "positive," but various risks remain, such as disruptions caused by an ongoing truckers' strike.

"It is positive that the price increase in areas directly linked with the everyday lives of the low-income bracket, including food, has slowed significantly," the finance ministry said in a statement.

"However, we still need to carefully observe lingering internal and external risks, including price adjustments at the end and beginning of a year, along with the disruptions in local logistics following the strike by the truckers' union," the ministry added.

South Korea invoked a return-to-work order on truckers of the cement industry earlier on Tuesday, as thousands of truckers have been on strike since last week, demanding the government guarantee what they call a "wage for safe operation."

The nationwide walkout has caused supply disruptions in major industries, sparking fears that it may further weigh down the economy already hurt by high inflation, weak exports and the strong US dollar. (Yonhap)