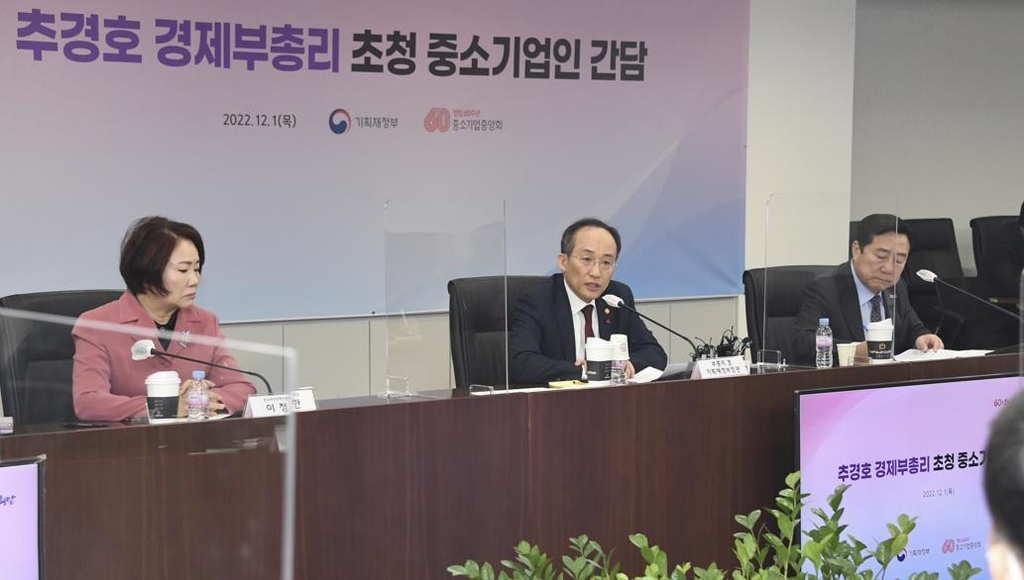 Finance Minister Choo Kyung-ho (center) speaks during a meeting with representatives of small and medium-sized businesses in Seoul on Thursday. (Ministry of Economy and Finance)

Finance Minister Choo Kyung-ho on Thursday reiterated his call for local truckers to return to work, stressing that their strike is causing severe damage to the country's economy, already hurt by uncertainties.

The remark came after South Korea invoked a return-to-work order on truckers of the cement industry earlier on Tuesday, as thousands of truckers have been on strike since last week, demanding the government guarantee what they call a "wage for safe operation."

"If (the truckers) continue their unjustifiable group action, we cannot overcome the economic crisis, and there will be no future for South Korean companies," Choo said during a meeting with representatives from small and medium-sized firms.

"In November, exports have decreased by a wider margin due to the global monetary tightening and deterioration of other external conditions," Choo said, pointing out that the strike will further weigh down the economy.

The government and the unionized truckers held their second round of negotiations on Wednesday. However, the talks lasted for only 40 minutes before they walked out of the meeting without a compromise.

Under the law, the land minister is entitled to invoke the order against striking truckers when the national economy is at risk due to their move.

Anyone defying the order can be punished with up to three years in prison or a fine of up to 30 million won ($22,500). South Korea had no record of issuing such an order since the relevant law was enacted in 2004. (Yonhap)